Home» About The Playhouse » History of the Theatre

The History of the Theatre 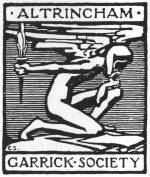 The Garrick has a long and illustrious history from its initial stirrings in November 1913 through the major redevelopment/refurbishment completed in 1999, to the present day set of offerings including amateur performances, professional productions, youth training and a cinema-quality Picturehouse.

Those who are interested in a more complete account than is presented here may wish to purchase a copy of The Flame Still Burns, the story of Altrincham Garrick Playhouse compiled by a true Garrick stalwart, the late Pamela Knox. Copies are still available from the theatre (at the give-away price of ONE pound only) and cover the tale of the Garrick from its inception to the 1992/93 season. 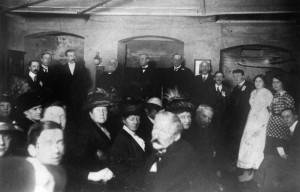 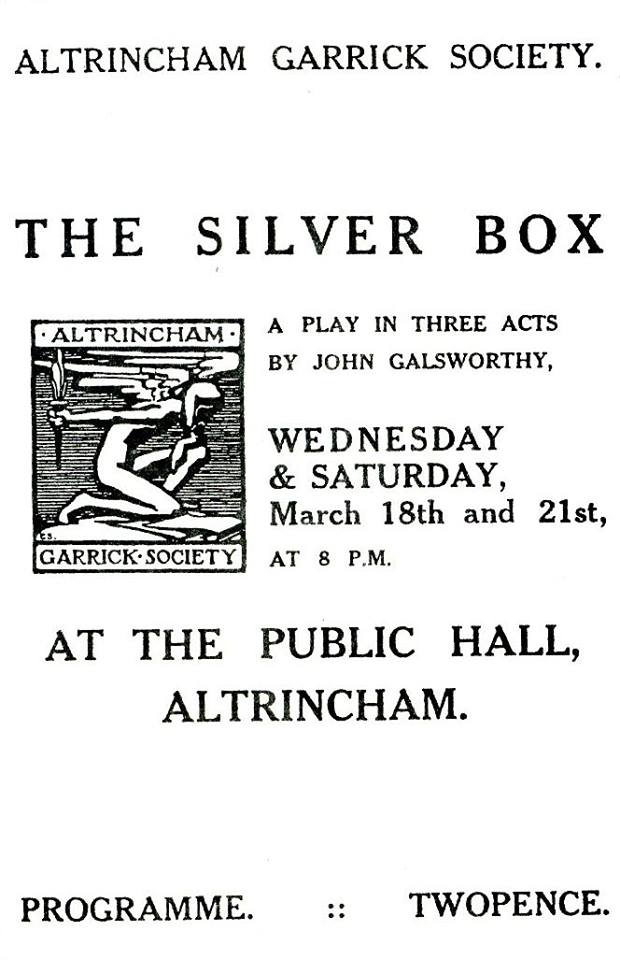 1915, May 4th – a number of members were struck off the list for non-payment of subscriptions (a warning for some of us these days!)

1916, May – Productions were suspended because of the difficulties arising from the war

1920 – Following an attempt to persuade George Bernard Shaw to allow a production of Major Barbara without paying royalties, the great man advised the theatre to become a Repertory Theatre, paying the actors, since this would result in a lower payment of royalties (unless very successful!). As a result of this the play was produced and all actors paid five shillings, which was promptly taken back by the Treasurer and put into a Building Fund, with the aim of building our own theatre 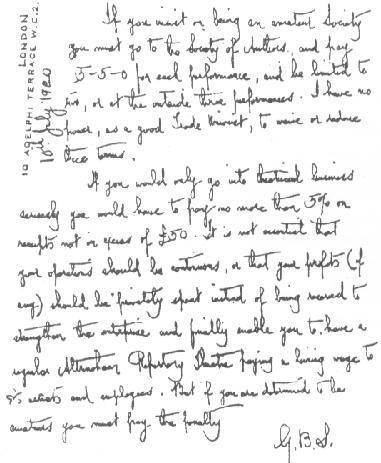 1923, January – ‘Fred Arnold Enterprises’ wrote to the society offering to stage Garrick productions on a commercial basis. This offer was not accepted!

1926, June – At the AGM it was announced that a plot of land had been acquired on Barrington Road suitable for building the proposed new theatre. The land had been purchased by an anonymous member and the Society would hold it on payment of the chief rent only. It eventually emerged that the benefactor was A.P.Hill, a founder member who had worked tirelessly towards the goal of a theatre in its own grounds.

1927, September – Mr R A Smith, who had produced the vast majority of plays since 1914, resigned as producer

1931, July 14 – the first sod was cut at Barrington Road by Jack Byrom and the building of today’s theatre was begun 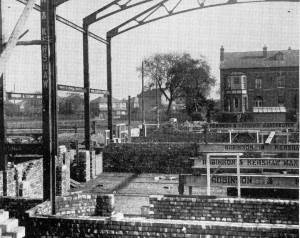 1932, October 1st – The first play opened at the new playhouse – ‘The Immortal Lady‘ by Clifford Bax 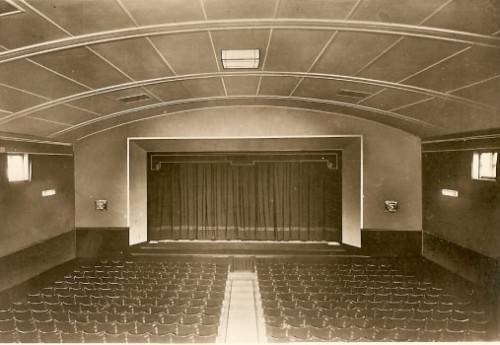 1935, March 11th to 18th – the 21st birthday of the Garrick Society was celebrated by the production of the Chinese play ‘Lady Precious Stream‘ , its first amateur production 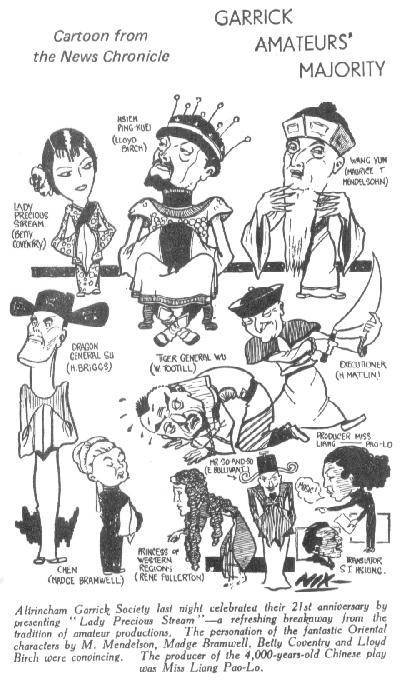 1935, August – Ruth Dunning, who first appeared at the Garrick in 1934, took over the role of Sally from Wendy Hiller in ‘Love on the Dole‘ at the Garrick Theatre, London, the first Garrick amateur to be successful as a professional

1939 – From a piece by ‘John Falstaff‘ of the Manchester Evening Chronicle – The Altrincham Garrick is one of the show places of the British Amateur Movement and its merit is twofold. First, it is secure and permanent; second, not only is the normal standard high, but the achievement also. There are few professional companies with such a striking list of pioneer efforts in plays and authors.

1939 – 1945 – For the duration of the war the theatre was handed over to a professional company, although the Society still provided staff and looked after the running of the building

1945, October – The first post-war production was ‘The Good Companions‘ by J B Priestley

1953 – A new building fund was started to be used for the erection of a small theatre at the rear of the Playhouse for experimental plays etc.

1957, October – the 25th anniversary of the Playhouse was celebrated by a production of ‘Teahouse of the August Moon‘

1961, September – The Garrick Bar opened for the first time, the first bar steward being Reg Hughes. He was succeeded early in 1962 by Albert Riddell who was to remain an indispensible part of the Garrick scene until 1981

1963, May – The first of five years of BBC radio recordings of Music Hall at the Garrick

1965, January – First staging of the now famous Garrick Pantomime – that year it was ‘Aladdin‘

1972-73 season – The 40th anniversary of the Playhouse – the Foyer was modernised with a new Box Office, there was new decoration and, most important, re-upholstered seating. Supporters were invited to endow a seat in the theatre, with ?5 securing a name plate affixed to the seat

1973, May – It was announced that while membership would continue performances would be open to the Public and advertised as such

1976 – A thrust stage installed during the close season

1977, August – The Garrick made its first appearance at the Royal Exchange with ‘Serjeant Musgrave’s Dance‘

1982, September – The season opened with a world stage premiere of ‘Psycho‘

1984, July – The Garrick produced a Music Hall as a part of the Edwardian Extravaganza in Dunham Park

1990 – the Northern Amateur Premiere of ‘La Cage Aux Folles‘ – Little did we realise then what had started; this was the first of seven productions of it!

1990, November – Redevelopment fever had started. At an Extraordinary General Meeting an ambitious modernisation project which including selling the land on which the theatre stood and leasing the theatre back at a low rent for 999 years was rejected, but the drive had begun and the S.T.A.G.E. fund was started with the aim of raising £500,000 by December 1992

1992, July – the first Garrick Playathon. A host of members arrived at the theatre on Friday evening to discover that the show they were to perform on Sunday evening was ‘The Boyfriend’ by Sandy Wilson. After a massive amount of work pulled together by four directors, two musical directors, two choreographers and four set designers a superb performance was given on the Sunday evening (requiring a massive three prompts during the entire show!)

1999 – The 1998/99 season finished early, in March, and the gutting of the auditorium began. The artistic side of the enterprise was kept occupied with a major open air production in Dunham Massey Hall of “Tom Jones” while the refurbishment went ahead. The grand (if a little delayed) reopening took place in October with a glittering production of “Camelot” (and a good deal of last minute rushing around!). The verdict was unanimous – Coming to the Garrick for a night out is now a real, and very comfortable, treat. Spread the word!

To coincide the start of the first season in the refurbished Playhouse, the Society also started with its own website, created and run by Richard Sails. Richard managed the original website for 14 years until it was relaunched in 2013.

2006 – Following the generous donation of some tiered, retractable seating by The Lauriston Trust, the newly christened Lauriston Studio was officially opened to the public in October 2006 with a memorable production of ‘Two’ by Jim Cartwright. Seating only 49 people, it is an extremely intimate and stimulating theatre space that has become a fully integral part of the Altrincham Garrick Playhouse. Since then The Lauriston Studio Theatre has produced many exciting and cutting edge productions and has won awards for the quality of work produced there. 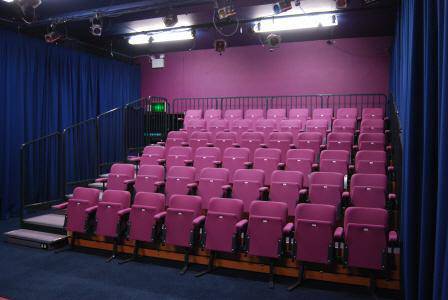 2013 – For the start of the 2013/14 Centenary season, the Playhouse relaunched its revamped website. This was overseen and managed by Stephen Bradshaw, who then ran the web-site until mid 2020.

2014 – The Society celebrated its 100th Season. At the bottom of this page you can see the Centenary Brochure, designed by Stephen Bradshaw.

2019 – The Garrick launched the Picturehouse. A versatile addition to the Garrick’s offerings to the community, this comprises a huge retractable screen plus projection equipment, which allows the auditorium to be used as a cinema. The screen can be set up in minutes, in front of most stage sets, and allows up to 350 people to view the latest cinematic releases, classical films, quirky “independent” productions and, most noticeably, showings of professional stage productions “as-live”. The first season included Kinky Boots, A Woman of No Importance (featuring Jennifer Saunders) and two wonderful modern ballets (Swan Lake and Romeo and Juliet) from Matthew Bourne.

2020 – The Covid-19 pandemic (ongoing at the time of writing) hit the Garrick just as hard as most theatres. The season was abruptly cut short in the middle of March, with the last “production” being an Illustrated Talk by Garrick stalwart Richard Sails, describing his hike in 1999 from Land’s End to John O’Groats. No productions were staged from then until the 14th of August 2020, when the Picturehouse re-opened with Kinky Boots (as-live theatrical screening) and then Aladdin (the 2019 film).

About this Web Site

A special mention must go to two people:

The work that both of the above put in have formed the basis of this current web site, and we are carrying on the fantastic job they did. Best wishes to both as they carry on their work in other parts of the Garrick, and thanks for all that hard work!