Home» Show » A View From the Bridge 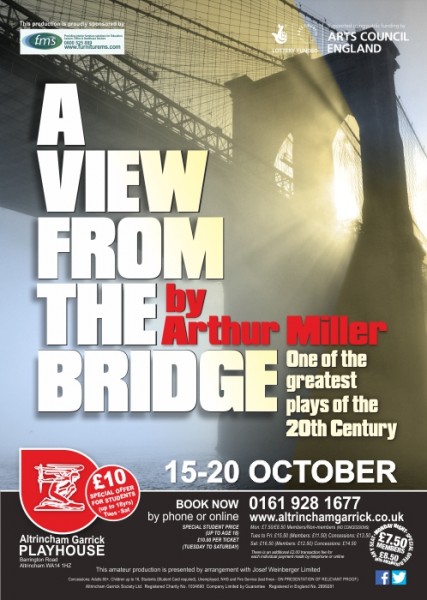 ONE OF THE GREATEST PLAYS OF THE 20th CENTURY

An Arthur Miller classic centred around the home of a longshoreman, his wife and orphaned niece. Their lives are changed forever when they shelter two illegal immigrant cousins. A powerful tale of love, violent opposition to a relationship and the ultimate climax ending in tragedy.

Not to be missed!

THERE are two interviews I would have killed for during my time as a reporter. One is Nelson Mandela, who never came to Trafford, sadly, the next is the American theatrical giant known as Arthur Miller, whose masterpiece A View From The Bridge is being stunningly revived by Altrincham Garrick. Pure magic flowed from that great man’s typewriter keys and not a word of his sublime dialogue is wasted by director Mark Butt and a cast who evidently share his deep seated affection for the great man’s work. I can’t say I find Miller’s plays an easy watch and I always feel emotionally drained after watching them. But I feel like I’m living – no dramatist affects quite as deeply as AM, God rest his soul.On the face of it, Eddie is a hard working soul who looks out with an almost fatherly devotion for his niece, Catherine. But Eddie has a darker side and I was completely captivated by the way in which Matthew Branwell bought this to the fore, helped in no doubt by Mark’s skilful direction. This leads to some heated exchanges between him and Catherine, a young woman starting to find her voice and expertly portrayed by Charlotte Jobling.The tension is ratcheted up in Eddie’s household with the arrival of Marco and the charismatic Rodolpho, the latter persuading Catherine there’s a more exciting life beyond the claustrophobic four walls Eddie would willingly keep her in. Charlie Gallagher excels as Rodolpho and this young actor is so disarmingly likeable you’re sure to be silently cheering him on as he locks horns with the hot tempered Eddie.The consistently impressive Nick Sample delivers yet again as the seasoned lawyer Alfieri, watching mainly from the edge of the stage as tragedy, that reminded me so much of something from a Shakespeare play, unfolds. I also liked the production’s effective and atmospheric use of music, to make this a truly memorable night out.
An unmissable production. Star Rating ★★★★★

Last night, a packed Altrincham Garrick audience was transported to the working class New York district of Red Hook just after WWII, and invited to sit in judgement on the life of Eddie Carbone, a longshoreman who betrays his ideals, family and community for a misguided idea of love. Arthur Miller wrote ‘A View From The Bridge’ in 1955 at the height of the McCarthy Communist witch-hunts in the United States, and this piece is soaked through with the notion of maintaining loyalty to your friends in the face of a state that is out to persecute you. Any deviation from this Sicilian code of ‘Omerta’ is dealt with harshly in this society, where street justice prevails over the rule of law. We are guided into this claustrophobic community by Alfieri (Nick Sample) the local lawyer, who acts as Greek chorus and is present on stage throughout as a witness to the events unfolding in the Carbone household. Eddie (Matthew Banwell) and Beatrice (Caroline Knight) act as surrogate parents to their 17 year old niece Catherine (Charlotte Jobling), following the death of her mother. The close parental relationship between Eddie and Catherine is in danger of tipping into something less wholesome, and Eddie struggles to contain these feelings becoming ever more suffocating in his treatment of Catherine. Following the arrival of two illegal immigrants into the family home to stay, Catherine falls in love with Rodolpho (Charlie Gallagher) and they plan to marry, forcing Eddie into a decision which has irrevocable consequences for all the family. The central performance of Banwell shows the early doting nature of Carbones’ relationship with Catherine beautifully, their soft conversation illustrating the innocent closeness of the early scenes. However, the character then needs to progress more into the man who cannot understand his feelings and lashes out angrily at everyone around him, and there this portrayal was less convincing, confusing the audience with his true motivation. When Eddie kisses Rodolpho as a way of undermining his masculinity in front of his niece, the audience should be conflicted as to whether he is attracted to him or not, this nuance is missing and therefore an important layer of his character is not fully explored. Knight plays Beatrice with a convincing ‘Noo Yawk’ drawl throughout, but again the motivation of the character needed to be realised, her sexual frustration with Carbone should be more palpable, as should her anger at her niece and husband. The innocent dreamer Rodolpho, excited for his new life in America, is brought to life by Gallagher with a suitable naive charm, although the variation in volume and heavy accent he employed, made some of the dialogue difficult to understand. Dark menace is added by Jack Hawkins as Marco, ultimately betrayed by Eddie to the authorities and forced into a murderous act of revenge. A strong performance by Jobling as Catherine emphasised the innocence of the character, bewildered as to the change in Eddie. A more ‘Lolita’ like interpretation of the role has been employed in the past, but her confusion is well represented here as she struggles to escape the oppressive attention of Eddie. Director Mark Butt employs the cast on a one set stage throughout which neatly represents the small nature of the world which the Carbone family inhabit. I felt that the naturalistic style of delivery required in Miller was a little stilted with some overlong pauses throughout, but I think that the pace and flow of the piece will pick up throughout the rest of the production run. Excellent usage of period music evokes the place and setting as well as acting as a subliminal commentary on events. In his role as Greek chorus Alfieri acts as the bridge between the two societies, old Sicily and modern America, hence the duality of the title. He pronounces his judgement on the events at the conclusion by saying that Eddie ‘allowed himself to be wholly known’, this flaw leading to his ultimate downfall in the tradition of Greek tragedy. Whilst this production partly realises this ambition, for me it remained a volcano which constantly rumbled without ever erupting into life. Star Rating ★★★