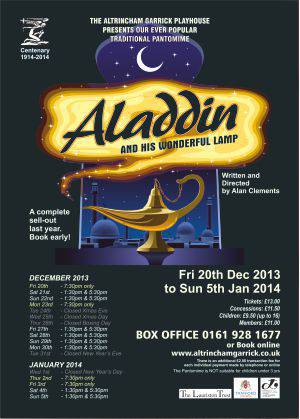 What would you do if you could wish for anything?

The classic tale of Aladdin and His Wonderful Lamp is brought to life in this traditional panto rendition. Plucky young Aladdin has fallen for the beautiful Princess Balroubador, daughter of the financially embarrassed Emperor of China. However, wooing his love may not be easy, as the Emperor has his own ideas about the sort of man Balroubador should marry. On top of this, the evil Abanazer intends to use Aladdin to secure the Magic Lamp containing an all powerful Genie that will make him Master of the Universe. With help from his mother, Widow Twankey , and Brother Wishee Washee, will Aladdin get the girl and stop Abanazer fulfilling his evil desires?
Of course he will. This is panto isn’t it!!

Widely recognised as the best value around, our traditional panto is an institution for the whole family. A complete sell-out, 8,000 people enjoyed last season’s panto. Book early!

The classic and traditional panto, Aladdin; boy wants girl, boy can’t have girl, boy rubs lamp, etc, etc. This telling is mixed up with a healthy crop of jokes, skits and visual comedy. I particularly enjoyed the ‘Twelve Days of Christmas’ sketch which I’m sure has developed into an even more chaotic routine as the run has progressed. The title role is becoming increasingly more popular to be played by a young male actor but, sticking to tradition, was tackled by Natalie Hinchcliffe. Natalie gave a righteous and warm interpretation and sung her songs with fine skill while Grace Stubbs gave us the beautiful Princess and had a voice to match, delightful! I remember when youth were a doddle to entertain, those days have clearly gone! When did kids become such a tough crowd! If they switch off from the action or don’t like any part of the performance for whatever reason, they make sure you know about it! The script had been written in house for the Garrick by Alan Clements. I liked that this script gave more attention to gags and sketches than the actual telling of the tale. I often find that the writing of DIY pantos can get over indulgent and start to feel more like an attempt at a masterpiece, though one point to always remember is who your main core of audience is, particularly when selecting songs and music – some chart tunes and a healthier selection of more recognisable music would have been more appropriate for this crowd, particularly as 80% of the audience were youth I have no doubt it would have kept them more engrossed. Technically this show surpassed, I saw some new (moving) additions to the lighting plot I’ve not noticed before which were undoubtedly money well spent as good lighting is always a great contribution for any production to appear more professional, and the sound balancing was also well managed and delivered! Wishee Washee; the part that goes to the most comical actor Tom Oliver delivered a cute, likeable/boy next door interpretation which was a brave attempt but ultimately a decision which didn’t quite pay off for me. Tom is very likeable on-stage and has potential to be a great addition to the Garrick casting list but I don’t think this genre of performance is where his strengths are. The chorus/ensemble of youths lacked pizazz and energy, it was a shame they mimed along to pre-recorded vocals and the movement was a little tame and under rehearsed. The audience was evidently as confused as I was when the Slave of The Ring danced with the Bats, I didn’t understand the purpose for this section, the music used for this was grating and the routine was too long and insignificant. The Emperor of China was wonderfully portrayed David Leathlean, one of those parts which can often be labelled as ‘bland’ was injected with mounds of energy and enjoyment! Panto’s need more Dave’s! Any panto audience want to see things go belly up whether it?s genuine or hammed, when David?s beard fell off his first instincts were to attempt to cover it up which did, ironically, add to the humour – keep it in and savour the moment!
Equally as wonderful was Mike Shaw as Abanazer  he played the menacing baddie with wonderful expressions, physicality and without over doing it, a very enjoyable performance, the audience loved him!

Craig Barrett & Gabriel Walker gave good energy and folly as the clowning police men PC Who & PC Wot which, as I’m sure you can imagine, certainly added to the panto fun!

What excelled throughout this entire production was Mike Shaw?s wonderful costume designs which never failed to impress!

CHILDREN are more sophisticated these days? is a phrase frequently bandied about and yet pantos, which provide audiences with a hefty dose of good, old-fashioned fun are as popular as ever. Youngsters and their families turn up in their droves to cheer the heroes and heroines and boo and hiss the baddies. Dave Midgley is playing Widow Twankey in Altrincham Garrick’s production of Aladdin and his Wonderful Lamp and he’s said there’s a golden rule when playing this popular character. Dave said: ‘When I first worked for Alan Clements our director, who has been directing Panto most of his life, he gave me a very good piece of advice ‘don’t try and be female’. The Dame should not be a ‘female impersonator’  the walk and the voice should be those of a man. That way it is much funnier.’ He added: ‘Otherwise, just lots of energy, lots of happiness and make friends with the kids.’ Dave said it helps to have a rapport with children if you want to be a great Dame. He said: ‘I think it helps a lot. The kids have to like you so you should like them. I do like kids, and I?m not embarrassed to be childish’ – on or off stage! – when I’m with them. It is also important not to talk down to them. You can be silly but not stupid. Kids.’