Home» Show » And Then There Were None 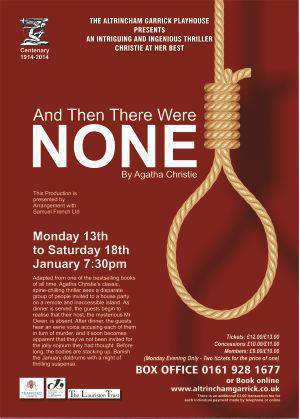 Adapted from one of the bestselling books of all time, Agatha Christie’s classic, spine-chilling thriller sees a disparate group of people invited to a house party on a remote and inaccessible island. As dinner is served, the guests begin to realise that their host, the mysterious Mr Owen, is absent. After dinner, the guests hear an eerie voice accusing each of them in turn of murder, and it soon becomes apparent that they’ve not been invited for the jolly sojourn they had thought. Before long, the bodies are stacking up. Banish the January doldrums with a night of thrilling suspense.

While many playwrights bring out the best in their characters, Christie is unafraid to mine the worst in hers. The story involves eight guests who have never met each other lured by a cryptic invitation to a deserted island and marooned, along with two house servants. A nursery rhyme suggestively embossed above ten little statuettes tells them how each of them will die. After a mysterious voice accuses each of the Guests having gotten away with murder the group begins dwindling one-by-one, but who has it in for this odd collection of individuals invited to spend a weekend mini-break on an exclusive remote island. Direction by Ros Greenwood enhances the plot and the personality of the play as well as the energy and chemistry of the cast. Ros had approached the piece as a revival rather than a re-enactment presenting the piece for a modern audience which translated really nicely and without any impede to the style and intended delivery of the text. Ros also took charge of designing the set, rather than sticking to the traditional three wall parlour set as instructed in the script, she’d gone for a more contemporary feel as she’d included the outdoors with her staging which created something a little more interesting given the setting and script refer to the island and the surrounds of the house, it created some attractive visuals and added to the eerie ambiance. From the modern approach to the staging, the piece didn’t feel as dated as I’d have expected it to; it seemed more of a morality play than a whodunit romp and an examination of the nature of justice. It’s very difficult to mention the performances without giving too much of the plot away to anyone who may not have seen or read the piece before but the cast is uniformly excellent and boasting some well-known Garrick faces. In particular David Reynolds is tremendous, playing Lawrence Wargrave with just the right mixture of pillar-of-the-community uprightness and subtle sadism. Kate Millington gave a strong delivery as the secretary who adds a touch of glamour to the gathering and Jonathan Black gave strength as the morally ambiguous Phillip Lombard, but, in all, the entire ensemble cast worked incredibly well as a team and bar the odd exception, no one really out shone anyone else which is commendable. I appreciate that the eerie chills approach is more in keeping with Dame Agatha, and we certainly got them in bucket loads but for the deaths, I like to see some gore, it?s a thriller, right? Perhaps being a little more gruesome (wherever possible) would have been fun, but I appreciate that may just be my morbid side creeping to the surface. David Richardson as the Narrator/Fred Narracott certainly was mysterious and brought the perfect tone and haunting stare to his performance which was perfectly understated as it needed to be but quite discomfiting, lovely! It is enormous fun witnessing the ten little sailor boys getting their comeuppance. Old-fashioned hokum you may say, but by the end, this makeover mystery with a moral twist leaves you feeling that the Queen of Crime has, in her own understated way, gunned down an entire class of decadent Brits.

When you think about it, it’s perfectly logical who the baddie is in And Then There Were None. The character, whose identity I won’t reveal, is just too calm and collected as the assembled party guests start falling like nine pins. As the other characters try to make sense of the macabre events, this cool customers disects them with the calm rationale of a forensic scientist. But Agatha Christie being Agatha Christie, she does throw in a red herring and I’m sure some members of the Altrincham Garrick audience will be fooled by her trickery. The production has been directed by Ros Greenwood who has designed a set that makes us feel just as trapped and claustrophobic as the poor souls marooned on the island. It conjurs the atmosphere of a funeral which is rather apt when you consider the fate awaiting most of the unfortunates lured to the coastal retreat. The suspense is largely maintained throughout and I particularly liked David Reynolds as Sir Lawrence Wargrave and Sandra Thomas as the horrendous Emily Brent, a good Christian woman who seems to have forgotten the compassionate part of Christianity. David Richardson also has quite a presence as the Narrator, with a singing voice that is as pleasurable as it is chilling. I’m not an Agatha Christie fan but this is an enjoyable night out, with moments of genuine shock and surprise that just might make certain audience members jump. Star Rating ★★★

Review by Julia Taylor of remotegoat

The Garrick, in their centenary year, shine their spotlight on a writer who has been going almost as long as they have. She is Agatha Christie and they have chosen And Then There were None, previously known as Ten Little Indians and, before that, Ten Little N..s, to represent her work. It is set in Soldier Island in 1938 where a group of well-heeled guests have answered the invitation of Mr and Mrs U N Owen. It transpires that the eight arrivals and their two servants are all responsible for the deaths of others as one by one, they are seen off. At the same time, ten ornamental little sailor boys are individually despatched. The first to pop his clogs is the car mad Anthony Marston. Stuart Billson comes up with a realistic choking fit and dies. The next death, to servant Mrs Rogers (Margaret Kenyon), is far less dramatic. She apparently dies in her sleep. More dramatically, John Westbrook’s General Mackenzie, who threatens Kate Millington’s Vera. is stabbed in the back. And so it continues. Their chief suspect, Rogers, the butler, (Brian Howlett) is ruled out when he is mown down by an axe. I am particularly impressed with Kate Millington’s portrayal of the glamorous Vera Claythorne especially since she is on stage most of the time. I also like David Reynolds as Sir Lawrence Wargrave. You look every inch a judge in those robes, David. Sandra Thomas does well, too, as the humourless Miss Brent. I am disappointed with the colourless set designed by Ros Greenwood who also directed. It leaves the large cast with nowhere to sit and often standing in an uncomfortable line. For that reason I was on the verge of giving the play three stars. That was before the final scene where the dead return as ghosts and the living, before they expire, reveal who the culprit is. A tribute to Ros?s directing skills, this excellent scene upped my review to four stars. It’s more like doing a puzzle than watching a play but equally enjoyable. Star Rating ★★★★