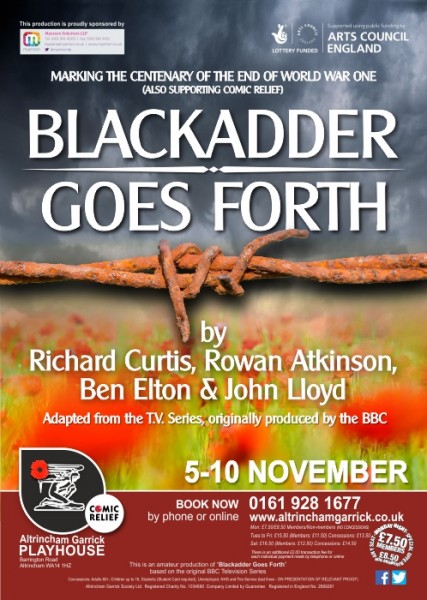 MARKING THE CENTENARY OF THE END OF WORLD WAR ONE

Based on the well loved television series, we are taken back to the First World War, with all the usual characters are involved in many anarchic situations. Blackadder and Baldrick are just two of the many characters who are caught up trying trying to escape the war. Laugh out loud comedy throughout but with an unforgettable ending.

We are also delighted to be featuring, in our programme and an exhibition in our Foyer, the cartoons of Noel Whittles MC, a soldier from Altrincham,  who served in the First World War. These cartoons, mostly never seen before have been kindly lent to us by his family.

The Production is proudly sponsored by

On the Sunday after the last night of Blackadder we have A Special Commemorative Celebration marking the end of World War One, 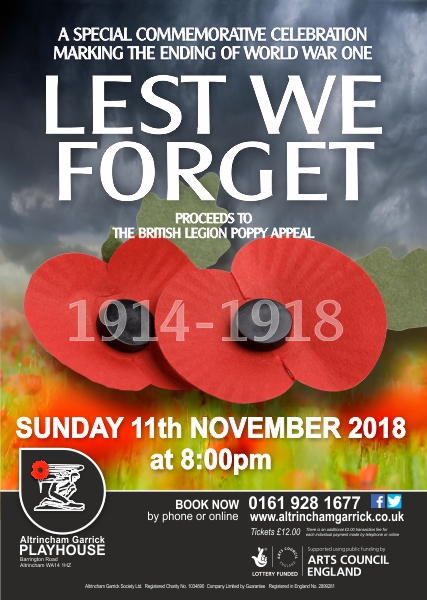 The concert will feature at least 20 well know Garrick performers in memory of ‘The Fallen’ – especially the 29 who gave their lives from the ‘bravest little street in England’ – Chapel Street – Altrincham, appropriately set on the set of ‘Blackadder’

WHAT makes a good sitcom? For me, one of the most important things is for the TV viewers to take the characters to the hearts and warm to them. Here we have an embarrassment of riches, from the bumbling Private Baldrick to the crown prince of the put down, Captain Edmund Blackadder, brought so engagingly to life on the small screen by Tony Robinson and Rowan Atkinson. I never thought I’d feel the same deep seated warmth for these characters again. But in Charlie Tomlinson’s flawless and fabulous stage production I felt it – in spades. As Blackadder, Steven Finney treats us a one man comedy masterclass and displays a sense of timing that is simply sublime. He can also make you laugh when he doesn’t actually say anything and while there are echoes of Atkinson, he’s more than succeeded in putting his individual stamp on this classic part. Michael Gallagher is equally memorable as his sidekick and the butt of his jokes, Baldrick. There’s a natural rapport between the two of them. Rehearsals must have been a hoot. In this particular outing, Blackadder and Baldrick are fighting for King and country in the First World War. They’re trying to keep their spirits up as they’re waiting for the next offensive, “the big push,” to begin. While Blackadder is unashamedly cynical about the War and what he sees as a senseless loss of life, the scriptwriters, Richard Curtis, Ben Elton, John Lloyd and Rowan Atkinson, never cross into irreverence and maintain the respectful tone needed when tackling a subject as difficult as this one. If their script was a drink it would definitely be vintage champagne and not a word is wasted by a cast that includes a superb Hugh Everett performance as the unbelievably dense Lieutenant The Honourable George Colthurst St Barleigh.

This production made me laugh until my sides ached but when the ending came the tears were in my eyes. And I, as a lifelong fan of this TV classic, knew what was coming. Star Rating ★★★★★

If there has ever been a time to revisit the Classic BBC television series; Blackadder, it would be this week – with this Sunday marking the centenary of the end of the First World War and the First World War being very much in the forefront of people’s minds. So, when I had the opportunity to see the theatre production of Blackadder Goes Forth at the Altrincham Garrick Playhouse this week, I jumped at the chance. First things first, this production is anything but amateur, it’s slick, funny and professional throughout. The script written by Richard Curtis, Rowan Atkinson, Ben Elton and John Lloyd’s is as razor sharp as it was when it first aired with hilarious set ups and gags throughout and has been cleverly adapted for the stage. As with most productions; the cast can make or break a show like this and in this case; it’s the cast who makes this show as powerful as it is. The lead; Captain Blackadder is played by Steve Finney who has embraced the mannerisms and style of Rowan Atkinson down to the very last detail, it’s no surprise when you realise he’s played Blackadder before in 2015 because he’s just too good not too. Finney is joined by a stellar cast including the hilarious Michael Gallagher who plays Baldrick and David Beddy who plays General Sir Anthony; both of which are wickedly funny with impeccable timing and delivery throughout. The entire cast deserve high praise for this production and I couldn’t fault any of them for what was a magnificent performance. Directed by Charlie Tomlinson who also plays Field Marshal Haig; you are immediately transported back to the trenches of WW1 and thanks to an impressive set design which features full sized trenches and dorms which are West End quality sets. This show is wickedly funny throughout until the end, but nothing can prepare you for that final scene which so cleverly puts the men who fought the war right in the forefront of your mind; the choices they had to make and the sacrifice they did in order for us to live today. I don’t think there was a dry eye in the room tonight as poppies fell from above once the cast had gone ‘over the top’. A wonderful production with a stellar cast and witty script which poignantly remembered the fallen just when we weren’t expecting it.

Verdict: Anything but Amateur, this is magnificent! Star Rating ★★★★★