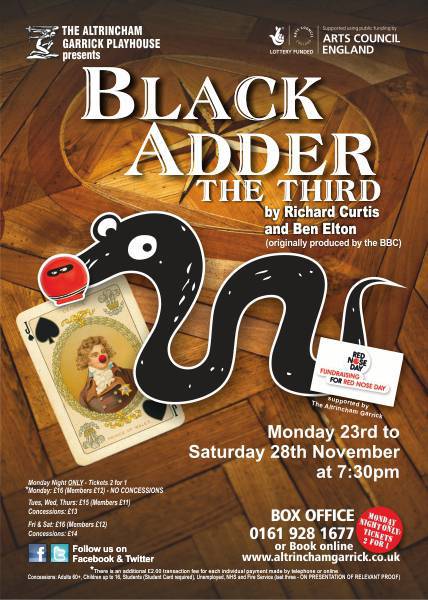 The hugely successful television comedy created by Richard Curtis and Ben Elton now comes to the stage in this award winning procession of well loved characters including Edmund Blackadder, Baldrick and the Prince Regent, Prince of Wales. Where once they had been lords and dukes we now find the latest of the dastardly dynasty of the Blackadders scraping a living as a butler to the stupidest man in England – the Prince Regent! Outrageous situations and exploits of the mean spirited Blackadder and his seemingly dim witted side kick, Baldrick also involve Dr Samuel Johnson, William Pitt the younger and various larger than life characters from the French Revolution. Don’t miss this unique opportunity to recapture the wit, fun and completely over the top acting of one Britain’s best loved comedies.

Had he been there, I think Rowan Atkinson himself would have clapped and cheered Steven Finney to the rafters after his performance as Blackadder. For this is comedy acting at its finest, with Steven displaying flawless comedy timing that could easily be found on a professional stage. The quips, the tormented facial expressions, this performance, perfectly pitched, had echoes of Atkinson when he played the role on TV. We meet Blackadder in Georgian England and our hero is working as butler to Prince George, a man so dim you’d be forgiven for thinking he was the by product of two cousins getting married. There are some memorable scenes between Blackadder and this royal half wit, expertly played by Hugh Everett in what is, for me, his best ever performance on the Altrincham Garrick stage. All the characters from the TV series are here and while it helps if you’re a fan of the original, this production, bursting with laugh out loud funny moments, is sure to convert you. It always helps when you have Richard Curtis and Ben Elton writing the script – the lines are a gift for Finney and company. Charlie Tomlinson has always impressed me as an actor and he’s equally good on the other side of the boards. Beverley Stuart Cole is great fun as pie shop owner Mrs Miggins and Blackadder just wouldn’t be Blackadder without his sidekick Baldrick (Michael Gallagher), a simple soul in oh so many ways.

For me, this is one of the best comedies the Garrick has ever done, a wall to wall triumph. Star Rating ★★★★★

JULIA TAYLOR – The Garrick has never shirked from presenting stage

versions of well-known TV series and, this time, they have come up with a cunning plan. It is their version of Blackadder the Third scripted by Richard Curtis and Ben Elton, which they perform fearlessly without copying the original characters too precisely but with input of their own which adds richness. They capture four episodes, all set in the Regency period. Our hero is employed as head butler to the idiotic Prince Regent so Baldrick is down graded to become Black Adder’s dogsbody. Steven Finney plays Blackadder with panache. With much wit and elastic facial expression, he manipulates his side kick Baldrick into carrying out his plans. ‘Finney’s acting is so precise, you can almost read his thoughts as he attempts to solve one difficulty after another.?These difficulties include Baldrick’s burning of Dr Samuel Johnson’s dictionary, Blackadder masquerading as the Scarlet Pimpernel., our hero’s attempt to get the Prince Regent wed for money and the Duke of Wellington (David Beddy) challenging the Prince to a duel and ending up unknowingly fighting Black Adder/Michael Gallagher is a hoot as Baldrick who is as clumsy and thick as ever. Yet even he cannot compete in the gormless stakes against the foppish Prince Regent, played with appropriately restrained humour by Hugh Everett. Beverley Stuart-Cole romps merrily through the role of coffee shop keeper Mrs Miggins and other equally amusing female parts. It’s good to see Steven Williamson back on the main stage in four roles. His depiction of Amy Hardwood’s working class dad is especially good. In this production, well directed by Charlie Tomlinson, the Garrick actors priceless humour, means the audience leave laughing and chatting happily about what they have seen. Star Rating ★★★★

For a number of years I have driven past the Altrincham Garrick Playhouse and said to myself time and time again I must pay a visit. I have heard nothing but superb reports about the productions staged here and tonight I finally got the chance to tick this one particular item off my theatrical bucket list. The theatre is as impressive as it is stunning with some of the friendliest front of house staff I have encountered in a long time. So my entertainment for the evening was Blackadder the Third, and it more than lived up to my expectations and more. Set on a simple stage (Trevor McKie) split between the Royal apartment and the servants quarters below the show recreates 4 out of the six episodes from the third instalment of the Blackadder series. The first act saw ‘Ink and Incapability’ in which to increase his intellectual standing, the prince decides to become patron of Dr. Johnson’s new dictionary, much to Blackadder’s disgust. However, Johnson is also planning to publish a novel written by Blackadder under a pseudonym, thus making him a millionaire. Matters are complicated, however, when Baldrick destroys the manuscript of the dictionary by burning it. Blackadder must devise a scheme to ensure that Johnson’s dictionary, and thus his novel, are published. This was followed by ‘Nob and Nobility’ where The Scarlet Pimpernel is the hero of the age. Blackadder, irritated by the new obsession with all things French, decides to cash in on the new craze. Attempting to emulate the elusive Pimpernel, Blackadder accepts a bet to rescue a French nobleman and collect a handsome reward. His plans go awry, however, when he and Baldrick are captured and have to escape from the clutches of the French revolutionaries. The second half consisted of ‘Amy and Amiabilit’  where upon discovering that the prince has lost his money playing cards, Edmund attempts to marry him off to Amy Hardwood, the daughter of a rich northern industrialist. Acting as middle man in the courtship, Blackadder eventually discovers that Amy’s father is also broke. However, it is also revealed that Amy is in fact The Shadow, a notorious highwayman, and Blackadder hatches a scheme to make himself rich. And finally ‘Dual and Duality’ this time the Prince incurs the wrath of The Duke of Wellington by spending a night with his nieces. Wellington vows to kill the prince in a duel, leaving Blackadder to formulate a cunning plan to substitute his own Scottish cousin, MacAdder, for the Prince in the duel. When this plan falls through, however, Blackadder must swap places with the Prince and fight the duel himself. All four episodes were superbly put together with each and every cast member performing their roles with a degree of professionalism I have rarely seen on an amateur stage. Steven Finney playing Edmund Blackadder takes on a role that previously I couldn’t have imagined anyone but Rowan Atkinson playing. His mannerisms were so well played out and costume convincing it was sometimes difficult to tell the two apart. Michael Gallagher as bumbling halfwit always with a cunning plan Baldrick also shines displaying all the disgusting habits viewers of the BBC TV series grew to love. His pin point accurate comic timing and interaction with Finney was a joy to watch. Prince George played by Hugh Everett ably took on the role made famous by Hugh Laurie. Complete with white make up and an equally white wig he portrayed the innocence of the character with skill and dexterity. The remaining cast members Steven Williamson, Beverly Stuart Cole, Richard Finney, David Beddy, Bob Miller and Leon McKenna all take on supporting roles changing from episode to episode with Cole hitting the spot with a number of stellar performances. Directed by Charlie Tomlinson, Blackadder is a triumph in every sense of the word. With the addition of accurate period costumes from the wardrobe team under the leadership of Mike Shaw you really feel that you have been transported to the Regency period.