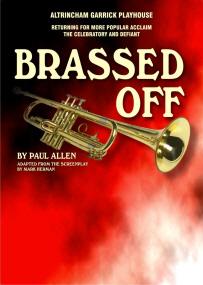 Show Dates
-
By: Paul Allen
Directed By: Terry Chandler
adapted from the well-known film
with screenplay by Mark Herman

In existence for a hundred years, Grimley Colliery Brass Band is as old as the mine. Set during the miners’ strike of the 80’s the miners are deciding whether to fight to keep the pit open. The only hope is for the men to enter the band into the national competition. They believe they have no hope until Gloria appears carrying her flugelhorn. At first mocked for being a woman, she soon becomes the only chance for the band to win. As Danny, the band’s leader,continues to exhort them to continue to the national competition, frictions and pressures are all too evident. But whose side is Gloria actually on?

Prepare to be blown away

Does anyone remember, particularly in the 1980’s, when they used to read out the numbers of jobs that had gone that week on the national TV news? It made depressing listening, and the list seemed to go on and on and on. But behind every unemployment statistic was a human being and we meet these human beings a decade later in Brassed Off, as the government starts closing the remaining coal mines. If you want an analogy, closing a coal mine was rather like ripping the heart and lungs out of a community but, in Paul Allen’s seminal and deeply affecting stage play, Danny, the dignified and decent brass band leader, is determined the colliery brass band will play on. A symbol of defiance and hope. Brassed Off still moves me to tears and I’ve seen the stage show three times and the film six. Altrincham Garrick’s production certainly pushes all the right buttons emotionally and although there are some heart wrenching scenes, there are also some hilarious ones to lift the spirits. A testament to people’s ability to keep smiling when their world is falling apart around their ears. The Garrick first staged this magnificent piece in 2005 and it’s being revived as part of the theatre’s 75th anniversary season. Apparently, the run is sold out but it’s certainly worth contacting the box office, just in case they have returns. It may be a cliche, but this really is an emotional rollercoaster. You’ll laugh, you’ll cry and, during some scenes, you’ll do both at the same time. The worst scene involves Danny’s son, Phil, who finally reaches the end of his tether when he ends up losing everything. I still have to watch this through my fingers.Performances from Terry Chandler’s cast are oustanding and live music from the Glossop Old Band ups the emotional ante even more.

ALTRINCHAM Garrick reverberates to the sound of the Glossop Old Band playing popular numbers such as the William Tell Overture and the Floral Dance until Saturday. They succeed in conveying the emotions in Paul Allen’s play, Brassed Off, through music. In the story, the band belongs to a pit which is threatened with closure and is fighting the Government by strike action in 1984. It’s musical director, Danny, is more interested in public performances than in the performance (or lack of it) at the coal face. The key role is played by Garrick premier actor, Allan Taylor. You would think he had been conducting bands for years. He uses every movement of the baton and every facial expression to convey meaning. His character is obsessed with the hope of entering the forthcoming National Championship in London. And his hopes rise when Gloria, an attractive flugelhorn player joins the band. Every audience will have to judge for itself whether or not she actually plays the moving solo on that instrument. She is a distraction to the male members who are weighed down with worry about the future and whether or not to fight on or accept redundancy. A sub-plot highlighting the relationship between Gloria (Jennifer Wilson) and Andy (Adam Whittle) is particularly well done. Peter Birch’s Phil, Natalie Horne’s Sandra and three young members of the Garrick Academy of Performing Arts led by 13-year-old Daniel Shaw as Shane, illustrate the hardship and heartbreak caused to families by the strike. There are mini-scenes spot-lighting its impacts on others but, partly due to the way the play is written, they occasionally, seem disjointed. Nevertheless, this production touches the heart. You have the poignancy of the men’s situation at work, the banter between band members, the humorous reaction to a woman entering a man’s world, romance and glorious music. It also conveys a serious message about the place of the working classes in the eighties. Just as you think there is a happy ending, it is snatched away and in its place is raw pain. But the real stars are the band. I sat on the front row and their playing was never strident but gentle and expressive. Star Rating ★★★