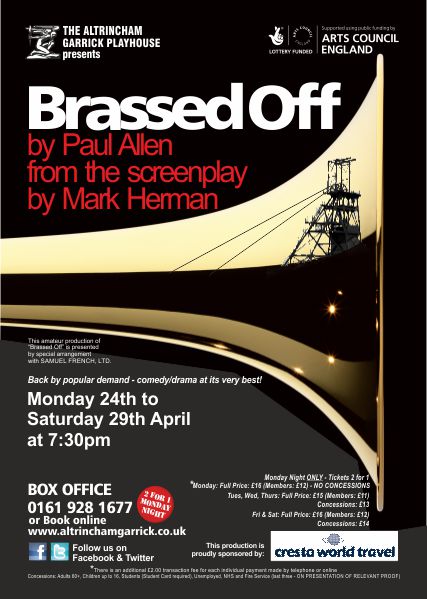 Show Dates
-
By: Paul Allen from the screenplay by Mark Herman
Directed By: Carole Carr

Back by popular demand – comedy/drama at it’s very best!

An exciting project involving collaboration with a Brass Band and a Garrick classic having found popularity with our audiences in two previous productions The stage adaptation by Paul Allen is set in Grimley (Grimethorpe), a mining town in the north of England, when the mine is up for closure. The plot concerns a family within a community fighting for survival and the fight, too, for the community band, a symbol of unity and success.The action takes place in various locations ? prominent among them a mining community in the north of England, the pithead, parts of Lancashire, a hospital and the Royal Albert Hall. The story is a memory narrated by Shane (8 when the action takes place in 1994). The actual time is around 2000.

The production is proudly sponsored by Cresta World Travel

It’s impossible not to be moved or stirred by this – the coal industry, an industry with a long and proud history, is being torn apart by the Tory government’s pit closure programme. The Grimley colliery also has the axe hanging over it. Families and friends are feeling the strain, a strain that culminates in one of the most harrowing scenes I’ve ever seen on any stage. But Danny, who leads the colliery’s brass band, insists the band plays on. Despite the encroaching gloom, this dignified and decent man has no intention of relinquishing hiss baton. There’s a national competition to win. When I heard the Garrick were planning to put this on I secretly hoped Martin Oldfield, one of the theatre’s finest actors, would play the Danny role. He certainly delivers here, yet again, and Danny’s BIG speech brought a tear to my eye in the same way the mighty Pete Postlethwaite did on the big screen. Paul Allen’s script bristles with emotion, passion and some very northern humour. A depression fest it isn’t. Although some of the scenes are a difficult watch. Mark Butt impresses yet again as the miner Phil, whose home life is one huge disaster zone and I also liked Beth Dilworth as Gloria, the returnee to the village who isn’t all she’s cracked up to be. Wingates Brass Band, talented to its core, also plays its part in creating a major theatrical spectacle. A spectacle that is sure to live long in the memory of all who see it.

Powerful and funny, this is a must see. Star Rating ★★★★★

THE Garrick’s production of Brassed Off, by Paul Allen, set ten years after the miners? strike, combines the skills of actors with performances by the renowned Wingates Brass Band. This moving production is syncopated with humour underscored by tragedy. The opening number by Wingates, who become the Grimley Colliery brass band, lifts you to a different world. It?s great when they march around the auditorium. The men face keeping their pit open or receiving lucrative redundancy payments. They are staunchly Labour and hate Mrs Thatcher. The band gives constancy in their lives. The chance of entering a championship competition at the Royal Albert Hall offers hope in uncertain times, yet throughout chummy rehearsals, they remain individuals struggling with their own problems. Their conductor, Danny, is devoted to the band. His son, Phil, his wife and family, face their own demons. Phil?s wife, Sandra (Di Boyer) thinks she knows what to do but Phil rates keeping his father happy above all. Garrick stalwart, Martin Oldfield plays the key role of Danny movingly and sensitively. He must decide what is more important, music or family summed up in an unforgettable speech. Mark Butt in one of his best performances conveys Phil’s dilemmas well. Beth Dilworth’s Gloria, a flugel soloist, is not only a star instrumentalist but a star actor, too. Her fledgling lover, Andy (Harry Jackson) backs off when he discovers her job..

A must see if only for the poignant ending. Star Rating ★★★★★

This amateur production of 'Brassed Off' is presented by special arrangement with SAMUEL FRENCH, LTD.