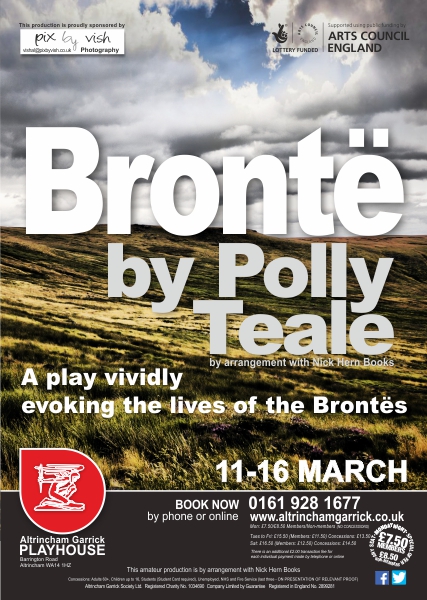 A PLAY VIVIDLY EVOKING THE LIVES OF THE BRONTES

Three actresses, in modern dress, are discussing the Brontes and their work. As they don their costumes, they assume the identities of Charlotte, Emily and Anne. A revealing story, which moves back and forth in time, it attempts to show the difficulties the writers had in their private and literary lives. Some of the characters from their novels also appear occasionally to add to the mystique of the family. Their poor health lead to the untimely deaths of the sisters and their brother, Branwell, who also features in this modern yet historical drama.

CHARLOTTE, Emily and Anne Bronte dream pf literary fame, three disarmingly decent Yorkshire lasses living with their clergyman father on the cusp of the bleak but beautiful moors. It’s impossible not to warm to them, thanks to the engaging and heart-felt performances given by Parissa Zamanpour, Amy-Lou Harris and Portia Dodds. When tragedy strikes, you will, unless you have a heart of stone, feel like you’ve undergone a bereavement. For these are performances full of warmth and intensity that give you no option but to care and care deeply about what happens to them. They feel like our very own siblings. Add a jealous, drunken brother who shares his sisters’ desire to have his writings published and you have the recipe for an evening of theatre that’s totally compelling and at times, deeply moving. Anthony Morris is perfect as this tortured soul, staggering about the stage in a haze of booze fuelled self-pity. We also are treated to extracts from the string of classics that proved to be the Bronte sisters legacy, my favourite being the scene from Jane Eyre in which Jane confronts the now blind Mr Rochester, expertly played by Andrew Higson, whose equally at home as the Bronte’s clergyman father, Patrick. Marcella Haze also impresses in the roles of Cathy and Bertha. nThe success of this rich and captivating production ultimately rests with its director/designer Barry Purves who serves up something that wouldn’t look out of place on a professional stage. His set is starkly atmospheric and the opening of Polly Teale’s piece breathtaking. Which begs the question why were there empty seats on Tuesday night? It was a travesty and my only hope is the box office will be doing very brisk business once word gets out as to just how good Bronte is.

Review by Julia Taylor for MessengerNewspapers

THE success of The Garrick’s Bronte by Polly Teale s down to the smooth blending of fact with fiction and moving effortlessly through time. It’s about the creativity of the Bronte siblings and their relationship with each other. In this case they are not the gentle sisters usually portrayed but are full of melodramatic passion which goes for their brother, too. Their books were written at a time when women writers were frowned upon yet the sisters light the spark of genius. This is the time when brother Branwell returns home in disgrace after a passionate affair with his employer’s wife, and turns to the bottle. Charlotte and Emily write of fictional characters such as Bertha Rochester and Cathy Earnshaw who return to haunt them. These are the most difficult scenes in a difficult play to make convincing but Marcella Haze who plays them both, succeeds perfectly. The two leading novelists are played by Parissa Zamanpour as Charlotte and Amy-Lou Harris as Emily who convey well the differences in their characters. We also learn more about Anne Bronte who acts as peacemaker between her two warring sisters. She is played by Portia Dodds whose portrayal of her final illness and last visit to the seaside is sad. Andrew Higson is authoritative as Patrick Bronte, whose role reflects the patriarchal society in which they live, as well as three other characters. The roles of Branwell, Heathcliff and Arthur Huntingdon go to Anthony Morris whose passionate portrayal of the inebriated Branwell is unforgettable. Geoff Scullard’s lighting is exceptional especially when creating the effect of burning pages. This play could easily become confusing but director, Barry Purvis ensures that it never does. Star rating ★★★★

Review by Johanna Hassouna-Smith for Number 9

Polly Teale’s Bronte is based loosely on the lives of the famous Bronte sisters: Charlotte, Emily and Anne. Set in the small Yorkshire village of Hawarth in the 19th century, where the girls’ imaginations grow to become literary giants of their time, despite their secluded life with their father (the village pastor) and their over privileged brother, Branwell. The story tells their life of poverty as they struggle to become writers in a world dominated by male literary scholars and one where they have never been allowed to travel outside of their small village to explore the world. Teale’s depiction of the three sisters is cleverly told by cross-cutting between the real world of the sisters’ lives and that of their famed characters. We see how the real life events helped to create the characters such as Charlotte’s time working as a nanny, being instrumental in her creation of the character of Jane Eyre. That said, there is a sense of the story jumping around in time and fiction a little too much as there are moments in the production which are difficult to place in the chronology of the story and can become rather confusing for the audience. I have to confess to that I am a novice to a Bronte novel, although I have seen Jane Eyre on stage, so this production was always going to teach me something. However, this wasn’t the reason for my confusion: the dialogue often refers to events which happen two scenes later and there was very little change in costume, setting or lights to give the audience some sense that time had lapsed or moved backwards. This must not be seen as a critique of the direction but the playwright as the actual script itself dictates so many changes in time and without written stage direction of changes in lighting states nor costume. I would have been interested to see how Teale herself directed it for Shared Experience Theatre Company when she first published the play in 2005. I think director, Barry Purves did a sterling job on this production and mustn’t be blamed for a sometimes cumbersome and confusing script. With a cast of only six, the performers had a really tough job as the dialogue was full of monologues and scenes dominated by the three quarrelsome sisters: Emily played by Amy-Lou Harris, Charlotte played by Parissa Zamanpour and Anne, by Portia Dodds. These three actresses proved their stage presence with commendable portrayals of the threesome. Zamanpour’s depiction of the passionate Charlotte was powerful and showed a bitter resentment toward the male dominated world she desperately wanted to break into. This was particularly apparent toward her brother Branwell, who was given all of the family’s wealth to make it big in London but squandered it on a frivolous lifestyle of alcohol and fancy goods. Branwell, played by Anthony Morris played a very good ‘drunk’ and his physicality of the role had the audience entertained and at other times gasping in horror that he may land on the laps of the front row audience! Although the middle sister Emily had a clear talent for writing, her gentle personality prevented her from wanting the fame of being known as a writer. In this role, Amy-Lou Harris had a sense of pathos for the character which was very easy to empathise with as the gentler, soft spoken sister. The youngest and lesser known of the Bronte sisters, Anne was depicted by Portia Dodds with a youthful innocence and charm, often lifting the lengthy script’s pace with her energy. All three performers had a wonderful rapport with one another and had the audience captivated throughout. Undoubtedly the most successful part of this production was the design. Everything was beautiful to watch. Even the stage laid bare before the house lights went down was full of the mystery of the West Yorkshire Moors, with a projected sky on the backcloth and an imposing tree stump on a raised level, centre stage. The atmosphere was ready to beckon Cathy and Heathcliffe at any moment as it looked and felt like a scene Wuthering Heights. The set design reference to books strewn across the stage created a contemporary air to the production and the opening scene of pages raining down on the actresses as they dressed themselves as the three sisters was absolutely stunning. The entire design team (of whom the list is understandably long), must be commended on all aspects of the design as this was what gave this production its professional quality.

I must confess that I love the Altrincham Garrick Theatre and the quality of their productions never lets me down. From the brilliant direction and design team to the wonderful performers, this production did not disappoint and was the professional standard I have come to expect from recent shows.

This amateur production is by arrangement with Nick Hern Books