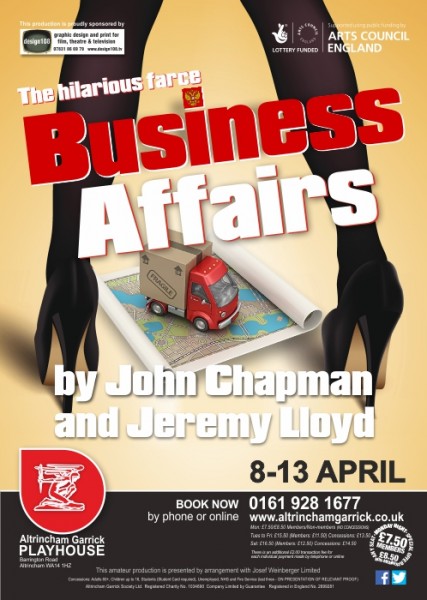 Two men are attempting to sell their failing haulage business to a pair of European businessmen. The deal is to be completed at a smart London hotel where the services of two ‘ladies of the night’ are employed to give the deal a little extra celebration. As in most comedies, things can and do go wrong. This time it is the unexpected arrival of the sellers two wives who have come to wish them good luck that complicate matters and they are mistaken for the call girls. Fun and frolics ensue and the situation is thrown into even more chaos when the two real call girls suddenly arrive on the scene. 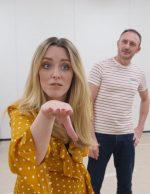 It’s hard to find a greater enjoyment at the theatre than going to see a good farce comedy and they don’t come much more enjoyable than ‘Business Affairs’ written by Jeremy Lloyd (Allo Allo, Are You Being Served) and John Chapman. The story follows two businessmen; Stanley and Norman who are attempting to sell their failing haulage business to a pair of European businesses. The contract is to be completed at a London hotel where the services of two female escorts are tasked with making proceedings go smoothly but the arrival of the sellers’ two wives complicate matters as they are mistaken for the escorts and well, it’s a hilarious situation which provides lots of laughs. Farce comedy is a true art form, and as such it needs to be well executed and you can always rely on the Altrincham Garrick Theatre to deliver a high cali bre production, and this latest production is no exception. The cast are a real credit to this show; their timing and delivery throughout is really commendable, the two vendors; Stanley and Norman are played by Jonathan Black and Mike Shaw who are both regulars on the Garrick’s boards, work well together in this production rifting off each other, setting each other’s gags up and working well as a duo; Black’s ability to create the off the cuff remarks after Shaw’s dialogue almost always gets a laugh from the audience. Their on stage wife’s; Hilda and Rose played by Sarah Reilly and Kim Armston add some extra humour while entertaining the European businessmen; Kurt and Sven played by Matthew Foster and Nick Lowe; both very capable comedic actors; special mention should go to Lowe who has a real talent in physical comedy and his facial expressions are priceless. The cast is completed with escorts Sabrina and Valerie played by Lindsey Barker and Emma Turner. The staging and props set in a London hotel has been given nice little touches of detail and it looks the part and doesn’t look cluttered, it’s always incredible to see the level of effort that goes into these Altrincham Garrick productions; from the acting on stage to the lighting, stage and directions – it’s truly remarkable and a true testament to this local theatre. Director; John Chidgey has brought out the best in this cast and it was a fun filled evening for all who attended.

Review by Julia Taylor for MessengerNewspapers

Business Affairs, currently at the Garrick Playhouse, leaves the audience gobsmacked with its twists and turns as John Chapman and Jeremy Lloyd’s farce has them in stitches. John Chidgey, the director, moulds it into a fast moving, well-timed masterpiece. In it, the wives of two owners of a failing haulage business, Stanley and Norman, inadvertently become ladies of the night to please two European businessmen who are supposed to be buying their husbands’ failing business. The reason is that Kurt (Matthew Foster) and Sven (Nick Lowe) will only conclude the deal if their request for dubious female company is agreed to. The purchasers are delightfully over the top and both have appropriate foreign accents and an obsession with sex. Then the sellers’ wives turn up only to be mistaken for the real call girls who don’t, and chaos reigns. The escalation of the fun is down to Sarah Reilly’s Hilda and Kim Armston’s Rose as the characters get more and more in the mire. The arrival of the real pros comes in a well orchestrated scene immediately before the interval. Lindsey Barker’s Sabrina and Emma Turner’s Valerie have a roving eye for the gentlemen and the chaos builds up even further. The expressions of Jonathan Black’s Stanley and Mike Shaw’s Norman during these moments, add to the fun. The cast are all equally good in this snappy, well-written farce. Star rating: ★★★★

Stanley Bigley and Norman Harris are on the verge of selling up and retiring to the sun with their wives. They run a haulage firm in Huddersfield and find themselves cooped up in a London hotel suite, waiting to seal the deal with two foreign businessmen, Kurt and Sven. But this being a farce, nothing goes to plan. Their two guests both have raging libidos and ask their hosts to lay on some “female company” to entertain them before they sign on the dotted line. Farces also work on the tendency for us humans to jump to conclusions and these is what happens when Kurt and Sven meet Stanley and Norman’s wives, Hilda and Rosie. They are of course stereotypes, a trademark of this popular theatrical genre. I have, in the past, been put off by farces because of the irritating and shallow nature of the dialogue and while some of the humour misses the mark I found myself laughing out loud more than once, thanks to a pacy script and the superb direction of John Chidgey. John coaxes some wonderfully engaging performances from Jonathan Black and Mike Shaw as Stanley and Norman and I also liked Sarah Reilly and Kim Armston as Hilda and Rose, with both characters undergoing a mini sexual re-awakening after 20 years in marriages that have becoming boring in the bedroom. As Kurt and Sven, Matthew Foster and Nick Lowe are an absolute hoot, both displaying a sense of comic timing that is second to none. When it comes to farces, John Chapman and Jeremy Lloyd are masters of their craft. I would really enjoy it if some or all of this cast worked together on a comedy that wasn’t as predictable as a farce as this theatre has the talent, in spades, to meet and conquer the challenge. Star rating ★★★