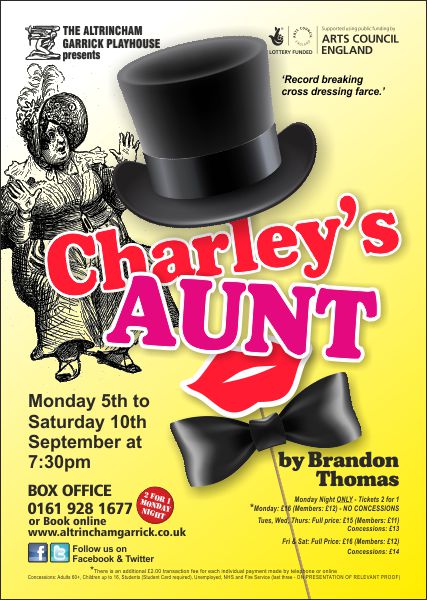 Charley and Jack love Amy and Kitty. Amy is about to go away, and Charley thinks he may miss his opportunity to ask for her hand. Then he discovers that his aunt, a Brazilian woman he hardly knows, is coming for lunch. How fortuitous! Now the aunt can chaperone while the boys ask the girls to marry them. Naturally, things don’t go as planned. Donna Lucia, the aunt, is late, and their friend, Lord Fancourt Babberley (Babbs) shows up in drag. He is convinced to pretend to be Donna Lucia, and a wild afternoon of mistaken identity, young love, old love, angry uncles, and one beautiful, exotic aunt ensues. In the end, just as it looks like Uncle Stephen is going to ruin everything, the real Donna Lucia steps in and graciously puts an end to the madness. All the lovers end up together and happy, except for Uncle Stephen, who was starting to fall for Babbs !

Review by Julia Taylor for SALE AND ALTRINCHAM MESSENGER

By George, a man in drag, upper class buffoons and the oldest trick of all mistaken identity – makes for solid comedy in the Garrick?s production of Brandon Thomas’s Charley’s Aunt. It features Jack Chesney, a clipped speaking Jamie Sloan and an amusing Callum Anderson as Charley Wykeham. Charley is the guy with the aunt. She comes in handy as a chaperone when, in the prim and proper year of 1920, the pair want to invite two young ladies for lunch. Unfortunately, the aunt doesn’t materialise, so posh actor friend, Lord Fancourt Babberley (Paul Antony) steps in. ‘She’ is the centre of all the fun. In his post drama school debut, Paul follows in the footsteps of such greats as Arthur Askey, Frankie Howard and Danny La Rue. And does almost as well. His portrayal of Charley’s aunt contrasts well with everyone else who play it straight in a mad sort of way. The two girls, Laura Crow’s Kitty Verdun, and Vicky Siddle’s Amy Spettigue fawn over the ‘old lady’ who wholeheartedly heterosexual, laps it up. Complications arise when two older gents fancy the so-called aunt. It’s a whirl of fun from beginning to end. The climax comes when the real aunt appears. Well performed by Carole Carr, she conceals her hand long enough to take in the goings on. This almost farce-like play, is complemented by three imaginative sets courtesy of Margaret Norris, elaborate costumes by Mike Shaw and his team and the superb direction of Alan Clements. Star rating ★★★★

Review by Rick Bowen for STAGESTRUCK

AS a comedic concept, it’s as old as the hills and yet the sight of a man in a dress still gets laughs, especially when the masculine mannerisms show through his disguise. Cross dressing isn’t just for Christmas and pantomimes, as those who see this clever if not side-splitting comedy will verify. Plays like these require a cast with exemplary timing and take it from  me, these Garrick actors don’t disappoint.  Jack Chesney and Charley Wykeham are two likeable if unashamedly vacuous young toffs who have set their caps at two very eligible young ladies,  Amy Spettigue  and Kitty Verdun. Lunch is in the offing, but the  two chaps have no chance of getting their girls without the presence of a chaperone. That’s where Charley’s aunt, Donna Lucia D’Alvadorez comes in. But the course of true love never runs smooth, as they say, and very drastic, 11th hour action is required Jamie Sloan and Callum Anderson are an engaging double act as Jack and Charley, convincing going into emotional meltdown when their best laid plans go horribly wrong. Paul Antony is jolly good fun – to pinch the parlance of the upper crust circle we find ourselves in – as their unlikely saviour Lord Fancourt Babberley. Some of these character names are just plain ridiculous. Carole Carr, an actress with quite a stage presence, brings a perfect sense of poise and elegance to the role of Donna Lucia.

As the nights draw in, a dose of frothy fun is just what lovers of summer like me need. But I would really like to see the Garrick turn its hand to say, a Neil Simon comedy. If any theatre has the talent in depth to do it, Altrincham Garrick does. Star rating ★★★

The Garrick’s season kicks off to a comedic start with the classic farce, Charley’s Aunt. Written by Brandon Thomas, a contemporary of Oscar Wilde, Thomas was an actor and playwright of some distinction, and wrote many ‘comedies of manners’ which proved exceedingly popular at the time. Sadly, none have survived save their titles, excepting Charley’s Aunt; which tells the story of three young men studying at university, all desperately in love and somehow manage to convince one of the men to dress up as another’s millionairess widowed aunt from Brazil (where the nuts come from!) in order that they might use her as a chaperone in order to get closer to the girls and tell them how they feel. And of course, as everyone knows, in farce, nothing ever goes according to plan but of course, again, according to the rules of farce, everything works out fine in the end! Of course, the plot and scenario are very dated and laboured; and despite some excellent one-liners, the script really doesn’t sparkle, and cross-dressing in our modern society is neither new nor shocking; and so it was a really quite surprising choice for Altrincham’s Garrick Playhouse with which to commence their 2016 / 2017 Season. Even more surprising was director’s Alan Clements choice to set the play in the year 1920. The play was first performed in 1892 and that year transferred to the West End for a then record-breaking run of 1466 performances. Numerous revivals have been mounted over the years, and, just as a little historical back-note, when Thomas’s daughter Amy Brandon-Thomas took over the role of Kitty, she insisted on setting each new version in the present despite the negativity of critics saying it would be better played in the period in which it was written. That argument continues to this day, and of course, setting the play in our present would not work at all, but I am uncertain as to why 1920 was chosen. It is only 2 years since the end of the First World War and Britain was still recoiling from that, and our three young male protagonists would undoubtedly have been called up and seen active service, and so, for me at least, this choice didn’t work. The set too was also one of the least convincing I have seen at the Garrick. In the first act the greenery being flown in for the second was clearly visible, and the grey stones on the outside to the apartment’s main door looked very much like breezeblock. Even when they were reverted in the second act into the garden scene, I couldn’t get the breezeblock image out of my mind. In the first scene it is morning and yet it was dark and black looking through the window. The scene change into the third scene however was very swift and cleverly thought through. I liked the idea of the auditorium chase sequence, and it was not overlong, bringing us back on to stage for the start of the third scene. I would have liked to have had less light on stage during this change though. It was rather distracting seeing stage hands in modern clothes and wearing headsets in the 1920s! Alan Clements direction was, in the main, quite solid and well thought through; despite many of the more physical and comedic moves seeming somewhat laboured. Maybe since this was opening night, they will be more at ease with them and allow them to become more natural now they know they work. It was the entrances and exits in the second act which simply didn’t make any sense for me. Especially those which involved entering and exiting the apartment. It was a very well chosen cast and all brought a great deal to the production, with some lovely little characters emerging. It is an incredibly difficult task though for modern actors, to ask them to recreate the moods, body-languages, voices and mannerisms of 1920 in a play which was written with the moods, body-languages, voices and mannerisms of 3 decades earlier. Special mention should be given though to Callum Anderson as Charley Wykeham and Liz Fraser as Ela Delahay who did indeed manage to strike this delicate balance extremely well. The two older gentlemen in the play, Colonel Sir Francis Chesney (David Reynolds) and Stephen Spettigue (Richard Sails), brought with them a sense of decorum and chivalry quintessential to that era, which, without this, the whole play would have fallen flat completely. But of course the whole play either falls or floats on the performance of Lord Fancourt Babberley who spends majority of the play in drag as Charley’s aunt. In this production this pivotal role was played quite superbly by Paul Anthony. It didn’t just float, it sailed magnificently! Anthony pitched the role just right, playing the aunt with a certain ungainly manliness but never resorting to panto dame roughness. The highlight for me which saw both the best acting and captured the era’s manners and decorum superbly was the vignette in the garden scene between Sir Francis and Babberley as Charley’s aunt. If the actors relax a little more into their roles, and the pace is picked up [remember this is Musical Hall style farce and not Coward-esque gentility] then Charley’s Aunt will become a great opening to this season and a production to be remembered with joy and pride.