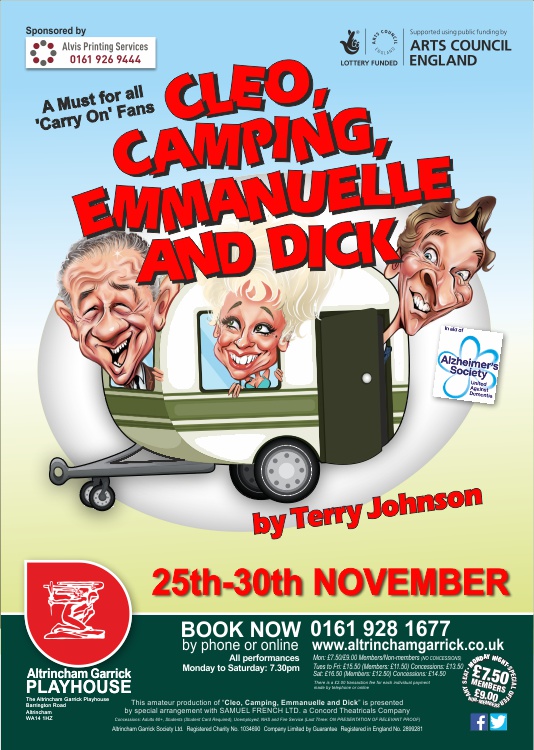 In 1964 a fifty-one year old man meets a twenty-seven year old woman at work. She’s young, buxom, blonde, pretty. And about to get married… Over the years, as they work together, the two grow closer; become friends. She promises him one night of lust in Brighton. Just a night. Just to get it out of his system. He takes her up on her offer and then begins one of the most well-known secret affairs of the twentieth century.

He was Sid James.

She was Barbara Windsor.

Terry Johnson’s sharp, biographical play follows the affair to its conclusion. Focusing on the events during the making of four Carry On films, it’s funny, touching and ultimately tragically sad as the lives of these icons of British comedy are put under the theatrical microscope.

It takes a great deal of courage for any actor, amateur or professional, to play three much loved icons of British comedy. They also need the talent and believe me, Mark Butt, Steven Finney and Dawn Flint certainly have it. In spades. Finney is as scream as Kenneth Williams, the master of the double entendre in Terry Johnson’s heartfelt and heart warming love letter to that most British of institutions, the Carry On films. This, for me, is the complete comic package, from the demeanour to that unmistakable nasal twang. Steven gets it just right. Dawn Flint also delivers a fine performance as Barbara Windsor, complete with her cheeky, cockney giggle. Then there’s Mark Butt as Sid James, who really comes into his own when he’s highlighting the star’s loneliness and deep seated love for Babs. The humour of the Carry On generation may be dated and unashamedly not PC but the stars of these sometimes saucy flicks had a mystique about them shared by very few of today’s so-called celebrities. It’s brilliantly directed by Charlie Tomlinson, one of the Garrick’s leading talents both on and off the stage and designed with his trademark creativity by Barry Purves, whose clever set is dominated by Sid James’ caravan/passion wagon. So, what’’s not to like? If the early Christmas shopping and the impending election are starting to get you down, I have the perfect cure.

Directed by Charlie Tomlinson, ‘Cleo, Camping, Emmanuelle and Dick’ is a biographical play that was written by Terry Johnson and highlights the era that covered the span of the creation of four ‘Carry on’ Films. Having premiered in 1998 at The National Theatre and having won an Oliver award, it would be interesting to see how this was interpreted on stage at The Garrick. The story is set in 1964 and is about a middle aged man who becomes close to a woman half his age whom he meets at work. They become good friends and, as they grow closer, she promises him a night of lust in Brighton. As the story continues, they both then begin to have a very secret love affair. Knowing that the characters in the play are about the infamous ‘Carry on’ duo Sid James and Barbara Windsor, there is immediately a very clear visual image in our heads and so the cast were presented with a tall order on stage to deliver these characters to the audience as soon as we set eyes on them. ‘Sid’, performed by Mark Butt portrayed Sid very accurately indeed. Whilst I would have loved more of the Sid James gravel sounding chuckle, Butt portrayed the sex obsessed Sid James very well. In many ways Sid came across as a troubled soul, not wanting to face his own reality with respect to the fact he was married and his life on stage was clearly the life he preferred. Butt portrayed Sid’s difficulty in accepting his own mortality and that any longevity with Barbara was merely a dream. Dawn Flint’s role as ‘Barbara’ was captivating. If you closed your eyes ‘Babs’ was on stage. Flint had the walk, the smutty conversation and even demonstrated her direct approach to tackling Sid’s advances. She even walked as Babs would walk sticking her chest out at all times. The yellow ‘pinging bikini top’ scene was hilarious to watch. However, the stand out performance of the night was undoubtedly Steven Finney’s portrayal of Kenneth Williams. His stage presence was magnificent and Finney carried off all of ‘Kennys’ mannerisms to perfection. Nasal, dulcet tones, nose in the air (mainly at the utter disapproval of Sid’s antics), he had all the mannerisms of the complicated character that defined who Kenneth Williams was. He was unhappy with the low budget aspect to the parts he was to play in the Carry On films and always threatened to leave. His one liners and put downs, plus his obsession with his haemorrhoids were hilarious. A particularly endearing aspect to the play was the relationship between Barbara and Kenneth or ‘Kenny’ as she fondly called him. With shared humour and giggles unique to each of them this was perhaps the most meaningful and sincere relationship on stage. The Set construction team must be applauded for a wonderful stage set. The caravan was outstanding right down to having a toilet, bathroom and bedroom. It was a wonderful focal point to the entire play. In many ways the play, representing three infamous individuals of the comedy world, echoes the tragedy of many of today’s stars whose private lives are examined and publicised for all to pull apart, discuss and dissect. This incredible play written by Terry Johnson was as amusing as it was tragic and provides the audience with a valuable ‘behind the scenes’ view of the real personalities of the characters in these films.

If you are a fan of Carry on and more so a fan of the characters that defined this wonderful genre of comedy, than ‘Cleo, Camping, Emmanuelle and Dick’ is for you.

I have to confess that I had no idea what I was going to watch with this production. I remember my mum was a huge ‘Carry On’ film fan but I already felt they were dated in the mid-1980s! So how does a company reproduce a ‘Carry On’ as a play, which is relevant to an audience in 2019?… Thankfully, they did not attempt to. This original script, written by Terry Johnson in 1998 was a huge hit at the National Theatre and spans 14 years of the love affairs, successes and tragedies in the lives of some of our best known ‘Carry On’ film actors: Sid James, Kenneth Williams and Barbara Windsor. The play is a comedy and is set against the back drop (quite literally) of filming locations used during the ‘Carry On’ films. The locations are less than glamourous, in muddy fields and pub car parks and most interior scenes are set inside Sid’s leaking caravan, which serves as his green room. Once again, the design concept of this play gave the whole production a slick and professional feel. From the brilliantly shabby-chic leaking caravan to the simple moving flats, the set was sophisticated yet uncomplicated. The costume design helped to give a sense of the ‘Carry On’ era from the ridiculous Roman soldier costumes to the spangled bras, displaying just enough cleavage to remind us of the frivolously raunchy ‘Carry On’ genre. The reality of this was that the saucy nature of the performers on screen, was mirrored in the actors’ lives off screen and certainly between filming takes with many love affairs and fumbling moments between the sheets of Sid’s leaking caravan. . .if the script is true to reality!? But sadly, this is where I felt the production really faltered. In a post-Weinstein, post-Operation Yewtree society, there were moments where I felt extremely uncomfortable with the lecherous ways of Sid James and the young girls in his backstage caravan. I’m not suggesting they be edited out, I’m just not sure how ‘entertaining’ these moments were and might even call this entire play premature to be produced in 2019. . .remember, when it was written, there was no Yewtree or Weinstein in the media! But credit, where credit is due, the three main actors in the cast were wonderful to say the least. Portraying such well known and loved real life actors was always going to be a tough task, but each of the performers were brilliant at portraying every well-known nuance and tick of these lively performers. Sid James, played by Mark Butt, was energetic and passionate yet full of the pathos for the unrequited love he felt for Barbara. Steven Finney’s portrayal of Kenneth Williams was absolutely spot-on in his characterisation: from the naughty cackle to the brilliantly comedic, wide-eyed facial expressions, I just loved this performance. Finally, Barbara Windsor, played by Dawn Flint was warm yet entertaining and full of the naughty charm she is known for in reality . . . just perfect casting. The main performers were supported by a sterling cast and one of which stood out for me was a beautiful portrayal of Sally, the costume girl by, Lottie Warburton. Well done all! At four acts long, the performance did seem lengthy and I wondered if whether the farcical pace might have been lifted at points to up the energy in the first half, to make way for the slower pace in the tragic second half. One punter was overheard leaving the theatre at the end saying, “Well, it was a bit morbid!” This ‘Carry On’ didn’t try to emulate the on screen farce (although there were moments of that), but merely told the story of the actors and the lives they led and relationships they forged, whilst filming, thus creating a very touching piece of theatre which educates us that not all is what it seems.

Once again the Garrick have staged a semi-professional production of the highest standard for a fraction of the cost and in a local theatre with great facilities. The productions are always brilliantly supported by local sponsorship and perform to sell-out audiences and it’s clear to see from this one, why!