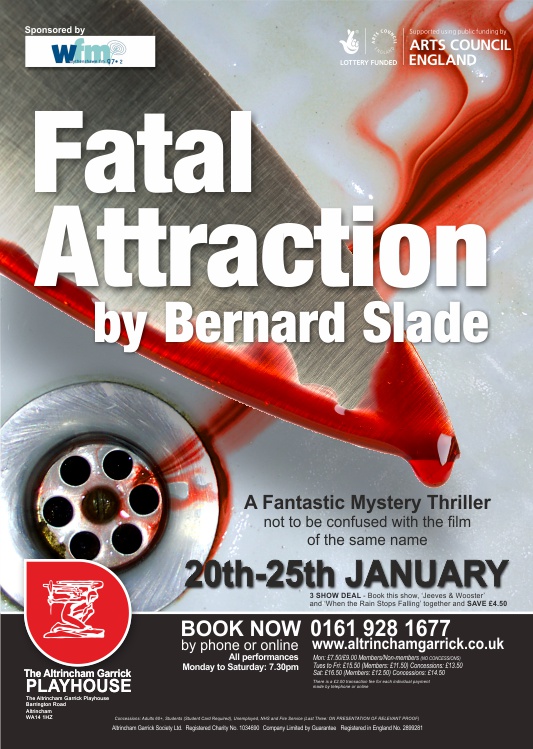 While at her beach house, (a remote cliff side cottage on Nantucket Island) sorting out her divorce, movie star Blair Griffin spots a paparazzo who has been stalking her.
She takes a bold step to shake him loose, setting in motion a series of shocking and terrifying events.

The unconventional Lieutenant Braden delves into sinister motivations to unravel the plots within plots in this thrill-a-minute action mystery.

A Fantastic Mystery Thriller (not to be confused with the film of the same name).

Review by Rick Bowen for StageStruck

FIRST things first. This is nothing to do with the steamy thriller starring Michael Douglas but rest assured dear theatregoer, it is just as compelling and just as captivating.

We meet one of the most fascinating female characters I’ve seen on any stage, amateur or professional, in the shape of actress Blair Griffin, who apparently witnesses the murder of her ex husband at her hilltop retreat. But all is not what it seems in Bernard Slade’s cleverly crafted and darkly funny thriller as we see another side of the enigmatic fading film star, brought so engagingly to life here by Garrick debutante Antonia Whitehead. Even I felt spooked as she played the victim – Blair just never stops acting and can turn on emotions as easily as most of us would turn on a tap.

Whitehead’s performance is so convincing I’m certain her first performance on this stage won’t be her last. But has Blair met her match in seasoned and cynical cop Gus Braden – an outstanding Nick Sample – in a play that’s sure to get the audience’s tongues wagging afterwards? Beverley Stuart Cole gives her best acting performance to date as Blair’s lush of an agent, Maggie Stratton.

Fatal Attraction is a major triumph for Director Bill Platt and his creative team and it would be a crime – pun intended – if theatre as good a his failed to play to packed houses. You really have no idea what’s coming next in a piece that’s perfect for dark, winter nights.. A real tale of the unexpected, this one.


This amateur production of “Fatal Attraction” is presented by special arrangement with SAMUEL FRENCH LTD. a Concord Theatricals Company