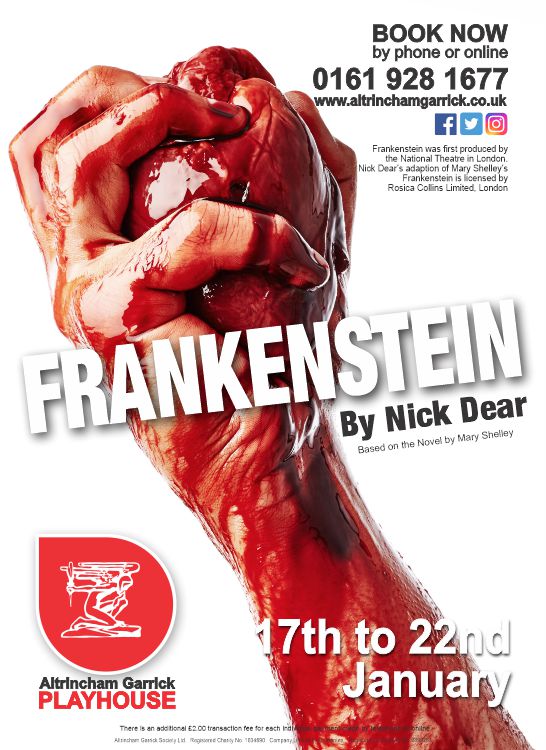 Please Note – Reduced capacity and socially distanced seating for our Tuesday, Wednesday and Thursday evening performances of this production.

Childlike in his innocence but grotesque in form, Frankenstein’s bewildered creature is cast out into a hostile universe by his horror-struck maker. Meeting with cruelty wherever he goes, the increasingly desperate and vengeful Creature is determined to track down his creator and strike a terrifying deal…

Scientific responsibility, parental neglect, cognitive development and the nature of good and evil, are embedded within this thrilling, gory, deeply disturbing classic tale.

Nick Dear’s adaptation of Frankenstein, based on the novel by Mary Shelley, premiered at the National Theatre, London, in February 2011 starring Benedict Cumberbatch.

Warning – this play contains scenes of a graphic sexual and violent nature. Not for the faint hearted.

Based on the Novel by Mary Shelley

Rick Bowen – Stagestruck – 5 Star Review
Theatre review blog — Stagestruck
IT’S the ultimate irony – only a blind man sees The Creature as a human being in Frankenstein.
The rest of the world in which he strives to survive sees him as a freak, incapable of thought or
feeling and the children he comes into contact with pelt him with stones.
Sadly, we still live in a society obsessed with appearances which gives Mary Shelley’s classic chiller a
resonance that still rings true today.
This timeless tale also offers a salutary reminder, if it was needed, of scientists trying to ‘play God.’
In 30 years of reviewing amateur theatre I can’t remember a performance as deeply affecting as that
of Rhys Nuttall who plays The Creature.
Now I challenge anyone in the audience not to be moved by Nuttall, as he totters to his feet in the
opening scene and begins a life of unmitigated torment and rejection.
It may only be January but I can say this performance will not be bettered on the amateur stage for
many years to come, for both its searing intensity and unbridled physicality.
The scenes in which The Creature learns to speak and read and appreciate the great works of
literature thanks to the patient and kindly De Lacey, his only friend in the world are beautifully
played by Nuttall and Hugh Everett are perfectly played.
This exceptional and deeply disturbing production by Barry Purves transports us to a world that
whips away our collective comfort blanket, a world where the sun never seems to shine. Bad
productions just aren’t in this man’s DNA, are they?
Nick Dear’s adaptation refreshes Shelley’s wonderful novel and while it gives the original a
contemporary feel it also remains faithful to it.
The production contains a very disturbing scene of sexual violence.
You simply must not miss this production which will move you and scare you. But the scariest thing
for me was how people reacted to The Creature, for me that was the truly monstrous thing.
Once again the Garrick delivers – and then some. Quite brilliant.
Until January 22. The box office is on 0161 928 1677 or www.altrinchamgarrick.co.uk
Star rating – *****
To visit Rick Bowen’s Blog, please click on the link below:
Theatre review blog — Stagestruck
Paul Wilcox – North West End Uk

These are interesting times at the Garrick Playhouse in the leafy south Manchester suburb of Altrincham. Under the aegis of Artistic Director Joseph Meighan, their programming is broadening its appeal beyond the traditional light comedy and murder mystery, into edgier and darker territory. So, we find 2022 kicking off with an absolutely cracking adaptation of the Mary Shelley gothic masterpiece, both chilling and thought provoking and with a simply stunning central performance.

Those patrons expecting a hoary old ‘Boris Karloff with a bolt through the neck’ rendition, would have been disappointed. With Direction and Set Design in the capable hands of Barry J C Purves, this was always going to be a more delicate study on the nature of humanity. By using Nick Dear’s 2011 National Theatre adaptation of the Shelley novel, placing The Creature (Rhys Nuttall) at the centre of the story gave both pace and arc to the two-hour production, dispensing with the unnecessary backstory of the creator.

We begin at the moment of creation with the obsessive and compulsive Victor Frankenstein (Tom Cunningham) bringing life to the inanimate creature. The two level set with a simple curtain is wholly black, lit with white spotlights casting long shadows onto the walls of the theatre, both effective and appropriate as it emerges from a metallic tub. From this point on Rhys Nuttall’s creature simply dominates, his performance is stunningly crafted as The Creature, with each step in his development into sentience carefully choreographed and incorporated. The movement of Nuttall around the stage in these scenes is masterful, balletic grace combined with a strength that was hypnotic to observe, as each new sensation was encountered it produced both comedy and pathos without any dialogue being required. By turns, apelike and clumsy he instils meaning into each gesture, holding the audience in rapt attention every time he is on stage.

As the story progresses, we observe the best and worst of mankind. The Creature encounters both hostility and kindness wandering through the world, searching first for the answer to the question ‘Who am I?’, morphing into his quest to find his creator and create a companion in his loneliness. The scenes with De Lacey (Hugh Everett), a blind peasant who teaches The Creature to read and showing him the only warmth he encounters, are delicate and tender and his development towards humanity serves to make later scenes involving both murder and rape all the more compelling.

An issue with such a strong central performance was that the parallel story of Victor Frankenstein was somewhat overshadowed in the narrative, with Cunningham needing more obsessional madness in his performance to match the physicality and dominance of Nuttall. In the same way Cumberbatch/Miller found in the original NT production, doing this allows the relationship with his fiancé Elizabeth (Amy Lou Harris) to take a more prominent part in the latter story and provide some balance. Victor Frankenstein’s story is a sorry tale of how single-minded passion can fatally cloud judgment and the play asks us whether a person is innately good or evil, or is it society which dictates our character and actions.

Overall, an ambitious and successful realisation of an excellent adaptation, lifted to another level by a superb performance from Nuttall as The Creature. Amateur theatre of the very highest quality

Brian Madden – Number9
Mary Shelley was just 18 years old when she wrote what is now considered a classic novel; Frankenstein. 206 years since she first began writing the novel, it is still being performed in theatres around the world. Nowadays it is more associated with Hallowe’en than a cold night in January. However, I certainly was given a night to remember and think this will be a production spoken about for months to come.
People often make the mistake that Frankenstein is the name of the monster, however, it is the name of the scientist who creates it. In this production the ‘monster’ is known as The Creature – a lonely figure who just wants to be loved.
I’ve seen a few productions at the Altrincham Garrick over the years, and some have been beter than others, but I can hands down say that their 2022 production of Frankenstein is the best thing I’ve ever seen on stage at the Garrick. I’d go as far as saying a professional theatre such as The Royal Exchange would have been honoured to have a production of this quality on its stage.
Some people have many preconceived ideas about amateur dramatics, or as I prefer to call it ‘non-professional theatre’. However, I would ask any of those to watch the Garrick’s production of Frankenstein to challenge their views.
Rhys Nuttall was absolutely sublime as ‘The Creature’. Everything about his portrayal of The Creature was just on point – his movements, posture, the way he brought the character to life. Some actors at the best of times struggle to lift the script off the page, Nuttall did it without even needing words. It came as no surprise to me that he was also the Movement Director for the production – you could tell each step he took was carefully executed. His presence was one to behold in a way it almost made the rest of the cast irrelevant.
In the beginning, anyone would be scared of The Creature – a semi-naked man who can barely move or speak. However, as the story unfolds we witness him learning how to live. He meets a blind peasant played by Hugh Everett and spends a whole year in his company. It’s here where he learns to speak and almost experiences what it is like to be human. He also not only learns to read but to appreciate literature. Until then everyone just sees him as a freak, incapable of love. It’s rather ironic that it takes a blind to see this. These scenes were a pleasure to watch and just so beautiful to see two people learn so much from each other.
The entire production takes the audience on a journey through the seasons. This was fantastically captured by the director; Barry J.C. Purves. I especially loved the scenes which included the elements of leaves and snow. From the word go the audience is transported to another world, which is all you can ask of any director.
When you look beneath the surface Frankenstein is actually quite a sad story. The themes of loneliness and rejection are key to the production. This was my first time seeing Frankenstein performed and will most certainly be watching it again. It really got me thinking, how much have we really moved on as a society – if we see something unusual, do we try to offer to help, or do we walk away?

Frankenstein does raise a lot of questions – what is it that defines good and evil? Is someone born evil, or is it something that society makes them? And ultimately what are the consequences of our actions? The production serves as a reminder that we shouldn’t tamper with things and let them be. 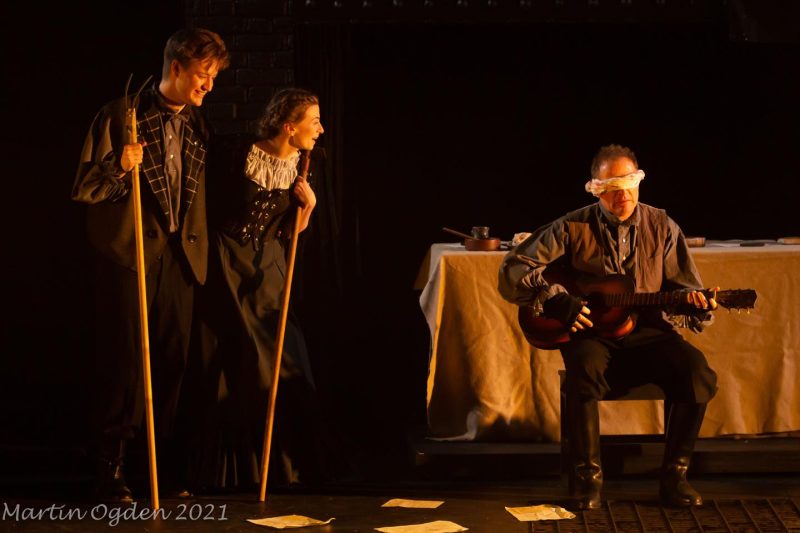 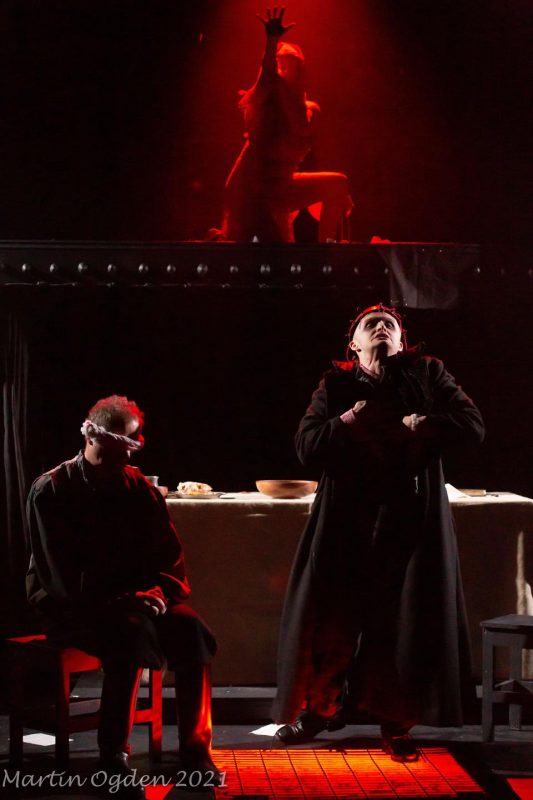 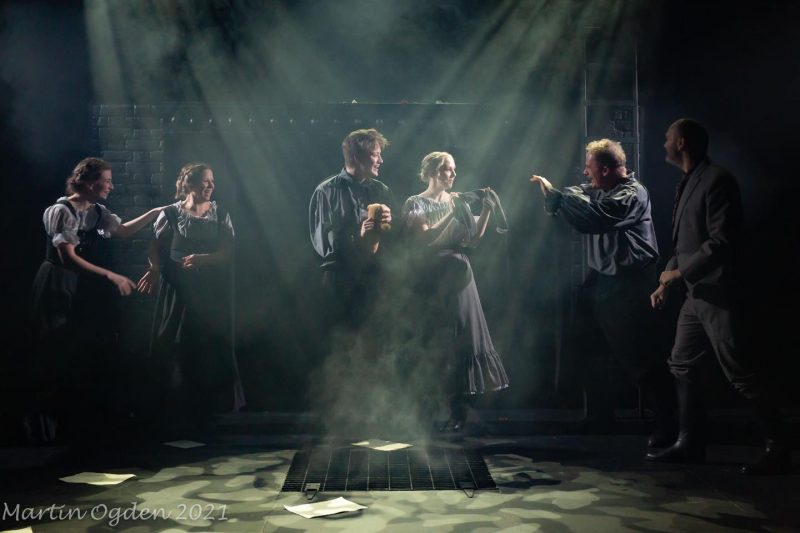 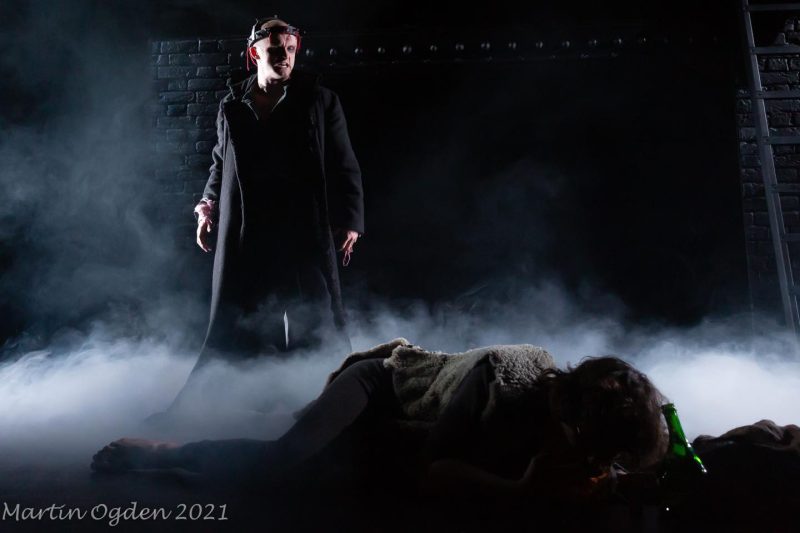 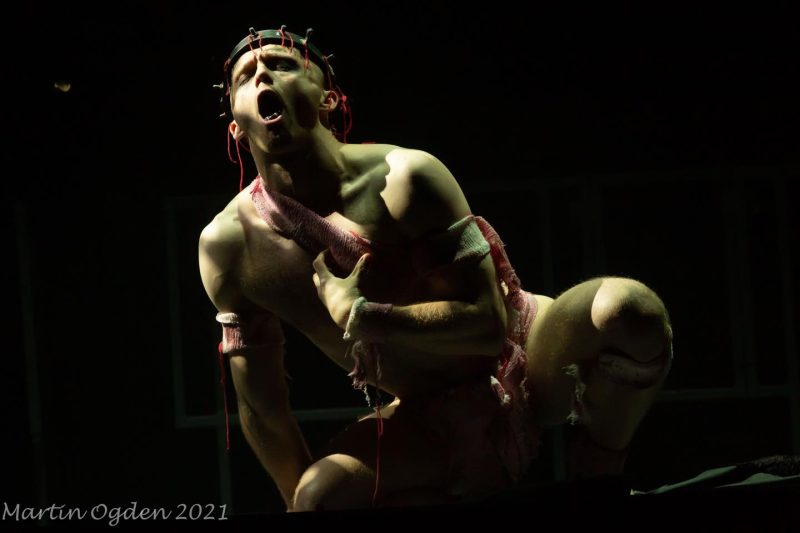 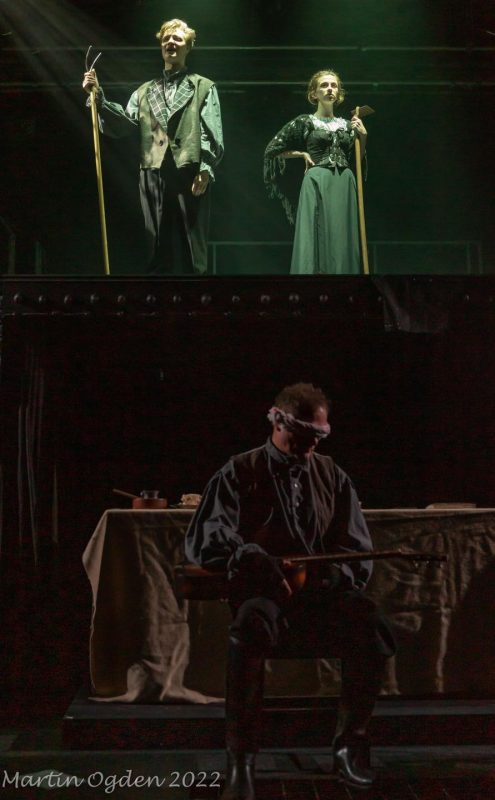 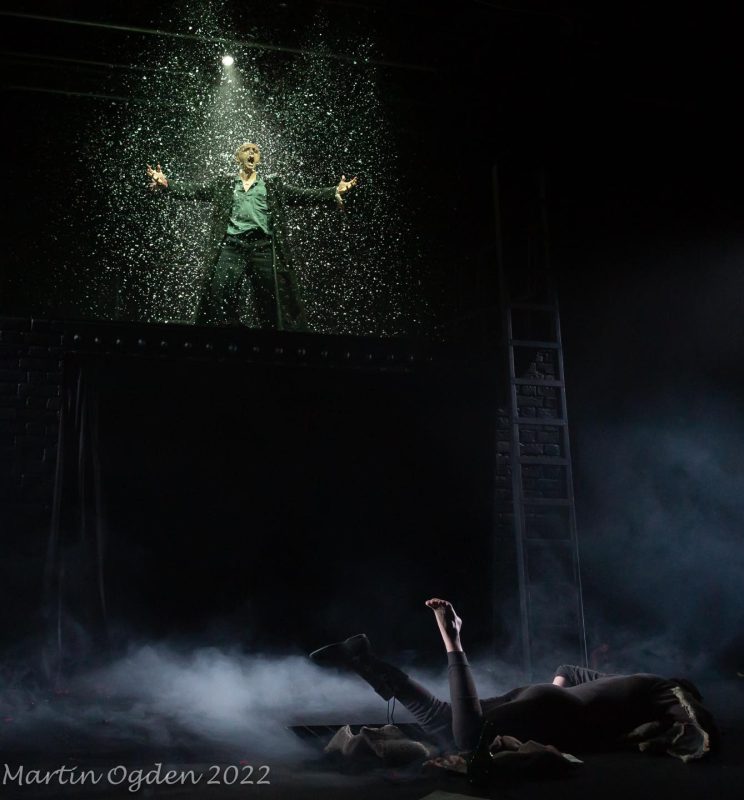 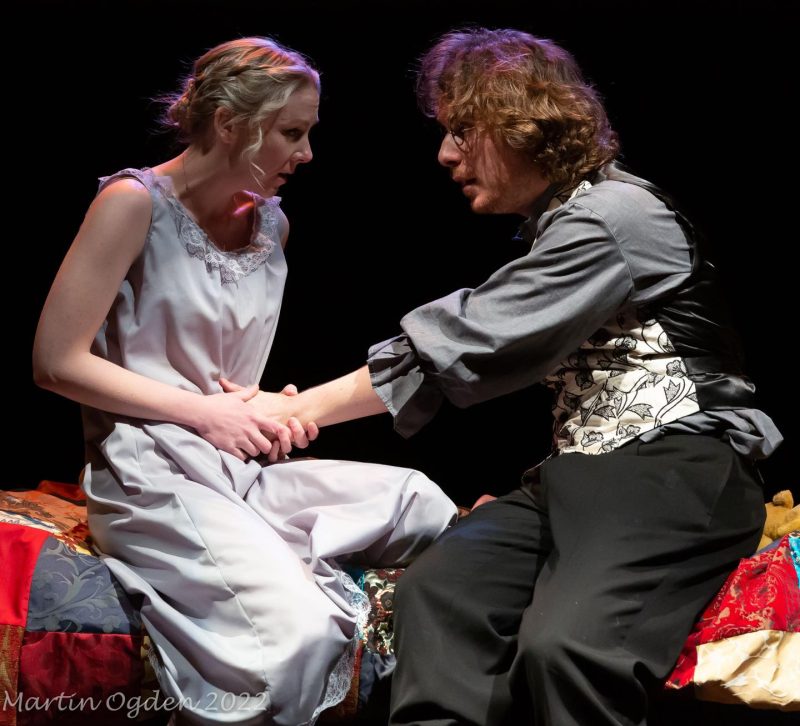 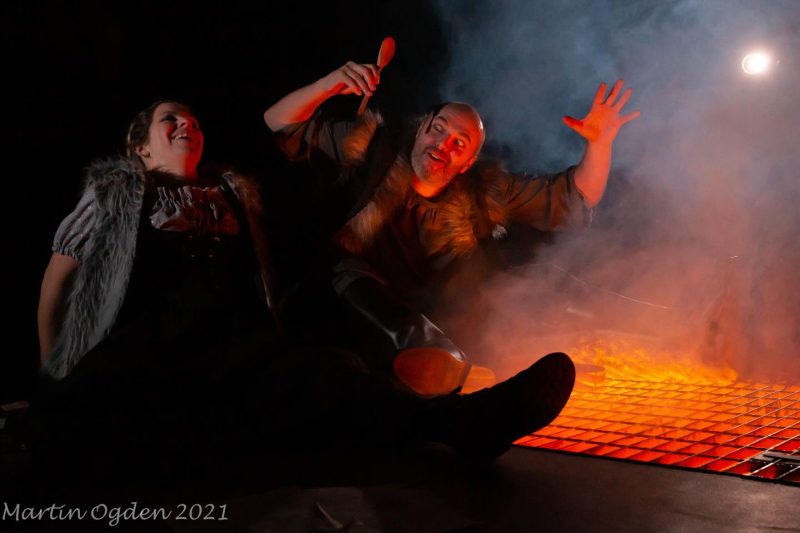 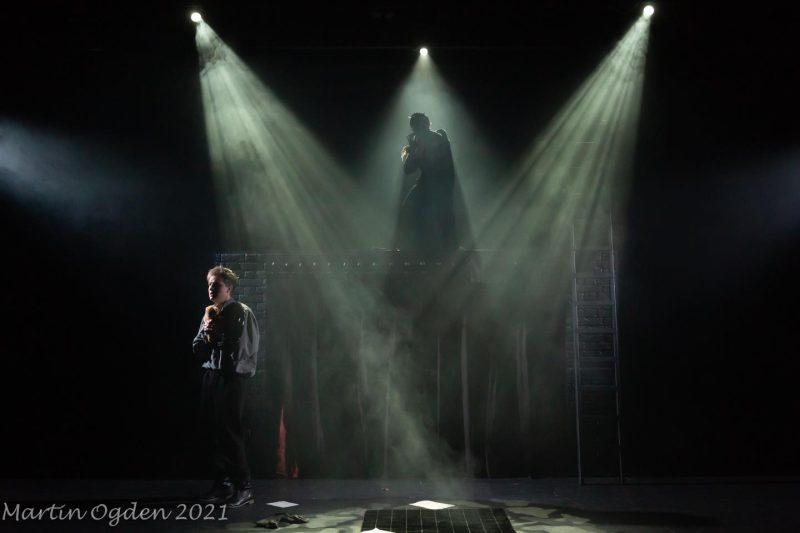 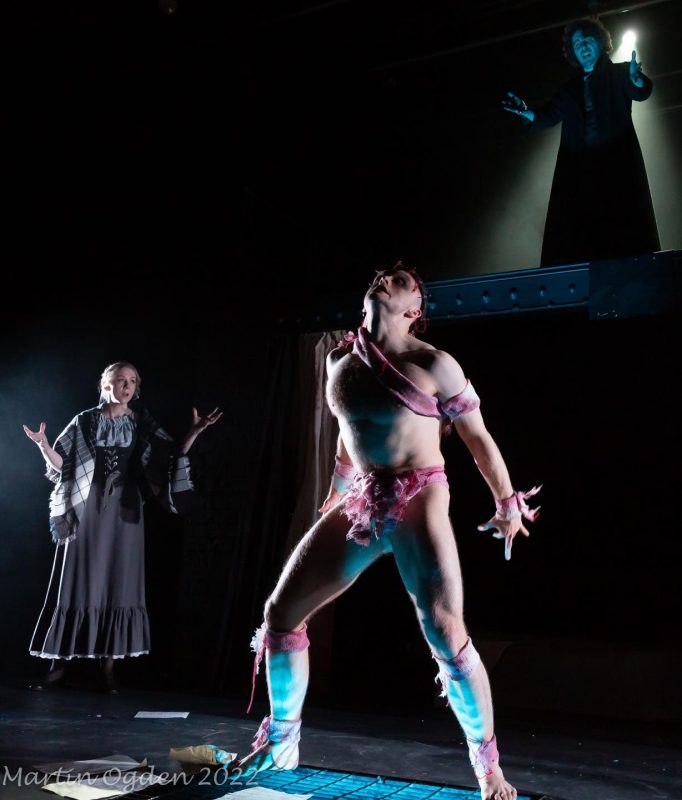 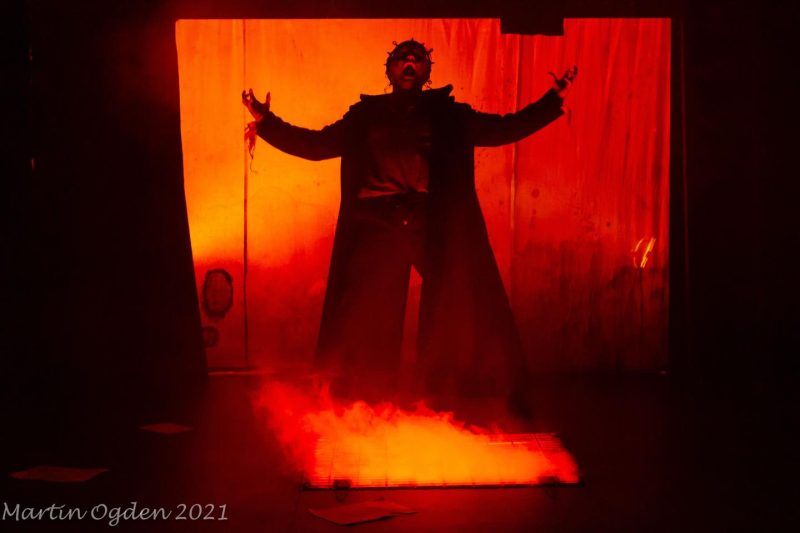 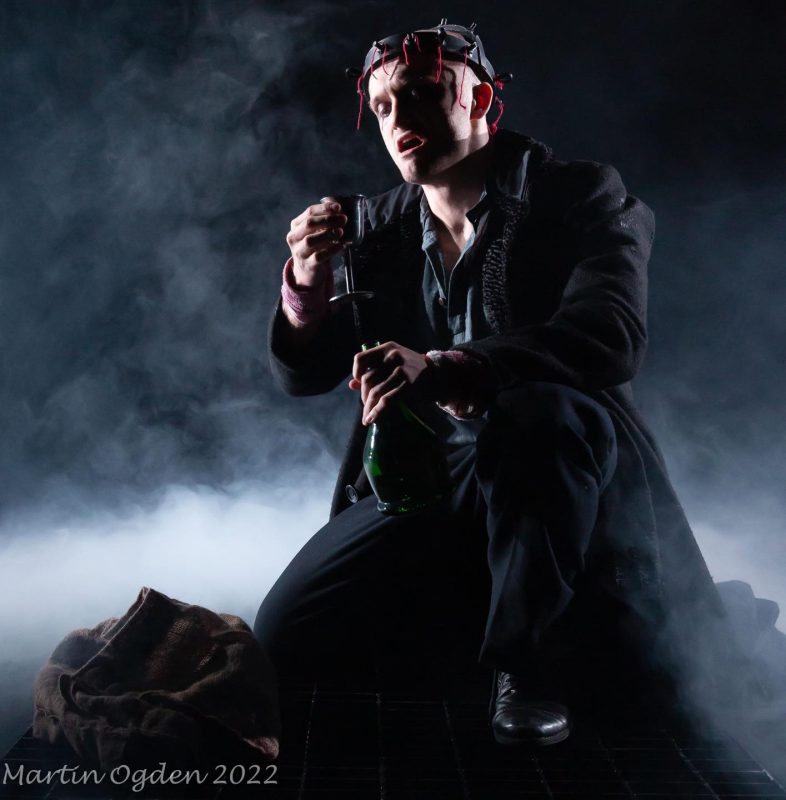