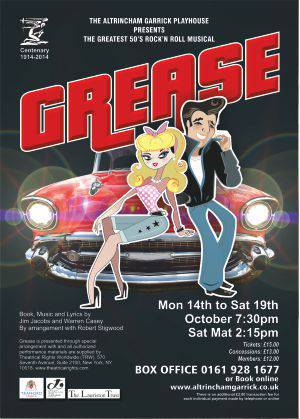 Show Dates
-
By: Book, Music and Lyrics by Jim Jacobs and Warren Casey
Directed By: Adam Whittle
By arrangement with Robert Stigwood

Rydell High’s spirited class of ’59’ gum-chewing, hub-cap-stealing, hot-rod loving boys with D.A.s and leather jackets and their wise-cracking girls in teased curls, bobby sox, and pedal pushers  capture the look and sound of the 1950’s in a rollicking musical that salutes the rock?n?roll era. While hip Danny and wholesome Sandy resolve the problems of their mutual attraction for each other, the gang sings and dances its way through such nostalgic scenes as the pyjama party, the prom, the burger palace, and the drive-in movie. Too many unforgettable songs to mention –  Grease is STILL the word! 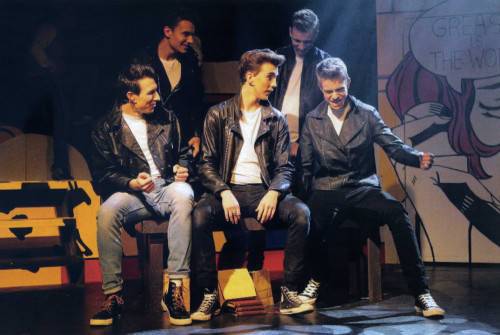 VIBRANT, energetic and uplifting, Altrincham Garrick’s production of Grease is the perfect antidote to these depressingly dark autumn. Particularly impressive is the dancing and I’m sure many members of the audience will be aching to join in as the cast really let their hair down. The lead roles of the strutting high school gang leader Danny Zuko and the squeaky clean Sandy Dubrowski are, of course, inextricably linked to John Travolta and Olivia Newton John who brought the characters so engagingly to life in the classic film version. But there’s plenty to admire in Gabriel Walker and Rachel Elizabeth Mayon who play the parts in the Garrick’s production. Gabriel is especially good at bringing out the comedy elements of the role – Zuko works desperately hard to maintain his super cool image – and Rachel has a singing voice with an astonishing range. Sandy’s transformation from an up tight square to a leather clad seductress is very convincing thanks to Rachel’s acting skills. Tori Green excels as Rizzo, the all knowing leader of the gloriously bitchy Pink Ladies and her rendition of There Are Worse Things I Could Do, for me one of the best songs in the entire, dream of a score, is worth the ticket money on its own. An evening of infectious 50’s style music and irreverent teenage humour, this giant of a musical is still well worth a watch.

Review of Grease by Julia Taylor for remotegoat

The Garrick’s production of Grease lightens up the auditorium making the usually restrained audience whoop, whistle and clap. It’s about two kids who meet up in High School after spending a magical summer holidays together. Unfortunately, at school, things are not so magical. One of the high points of the show is when the boy gang T-Birds and the girlie group, The Pink Ladies, sing that throbbing hit Summer Nights. Another good one from the entire company is We Go Together at the end of both acts Tori Green, as Rizzo, firmly in charge of the Pink Ladies, sings There are Worse Things I Could do in an unforgettable way. She is the girlfriend of Kennickie, a prominent member of the T-Birds. Ashley Ball who plays him makes you wonder which he loves most, Rizzo or his new car. The imaginative folks backstage come up with a shiny red vehicle complete with working headlights which slides gracefully on to the stage. Director, Adam Whittle does well to use the services of Lorna Sales as choreographer. The result is some lively dancing especially in the scene where Danny and Cha-Cha (Jennifer O’Neill) win a hand jiving competition. It was also a good idea, to place the band, led by Mark Goggins, on stage. The leads, Gabriel Walker as bad boy Danny and Rachel Elizabeth Mayon as Sandy, do a great job. I love the way Gabriel conveys the feelings of a testosterone filled teenager just through looks and movements. We sure know when he thinks he’s on a winner! Rachel is just right for Sandy. She sings Hopelessly Devoted with great feeling. Another good singer is Vicki Harrison’s Marty. Smiling throughout, her Freddy My Love is great to listen to. The young cast are so good they could easily call themselves the Garrick Musical Theatre.

It goes without saying that the musical ‘Grease’ by Jim Jacobs and Warren Casey is a very popular one, It’s had many successful revivals on Broadway and in the West End as well as countless tours and it even won the title of ‘the world’s best musical’ thanks to a public vote a few years ago! Can you believe!? Grease is, for me, an ultimate guilty pleasure show (and film) and was probably one of my most played CD’s during my early teens (yup, it?s true!)? Set in the late 1950’s – Grease follows the exploits of a graduating class who inhabit Rydel High. The show, in its original form, was not considered ‘family entertainment’ – it’s plot was not as thin as it’s become as it tackled issues about teenage drinking, smoking, under age pregnancy and also included a fair amount of physical violence, however, 42 years later with a smash film and countless stage revivals to its name, although still touching on the topics, what’s left is a much more sanitised and ‘family friendly’ version of a once edgy musical offering. The one static set for this production was simple and worked well, I liked the 50’s pop art design and the split levels helped to create some nice visual moments. The Garrick welcome first time choreographer Lorna Sales to the production team making this show her debut with AG. Lorna set some great routines which were very visual and striking at times. The dancing was tackled head on by her cast, though I think the strain of a short rehearsal period was exposed when it comes to the choreography delivery as quite a few movement hiccups were noticeable at several points. A main ingredient for this show is energy’  you cannot have enough and this production served up plenty of it! It was evident that the entire cast were having a blast which was key to its success. Particular stand outs for me were Josh Mosiuk who gave a quirky Eugene-  Josh was extremely engaging whenever on stage, as was Vicki Harrison as Marty who not only looked perfect for this role she gave a strong all round delivery. This show was indeed stolen by Tori Green as Rizzo, Tori was the one you heard people talking about as they left the theatre, vocally, ‘Worst Things I Could Do’ was flawless – fabulous! Sandy, played by Rachel Elizabeth Mayon was as sweet as she should be and sung a good rendition of ‘Hopelessly Devoted’. I enjoyed Gabriel Walker’s Danny, he had the characters clumsy and slightly gawky side to perfection which gained him some worthy laughs – very likeable! Mark Goggins  band sounded fantastic! This just confirmed to me that, whenever possible, the musicians should either be on stage or in the pit ? the sound of the live musicians sounds so much more alive and exciting compared to when they’re channelled through from the studio. Great job! Lighting wise, there were a number of black spots across the set and I felt that the design wasn’t colourful or vibrant enough for this style of show. Sticking with technical, the sound levels had weak spots as we could hardly hear the boys during ‘Summer Nights’ and mic levels were erratic during company numbers. Director, Adam Whittle had created some lively and comical scenes and had, wisely, taken inspiration from the film while still able to include flashes of his own vision too, though some of the blocking decisions were questionable and at times didn’t seem to have purpose but still, a laudable job with a strong result for this high energy and electrifyin’ show!