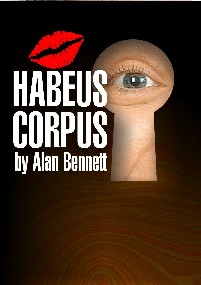 A gorgeously vulgar farce that is a celebration of sex and the human body.

A satirical merry-go-round in the home of the WICKSTEED family, where all the characters move in and out through a maze of mistaken identities and sexual encounters. As Dr. Wicksteed says ?HE WHOSE LUST LASTS LASTS LONGER?.

Just the right medicine for those dark January nights.

'This is a strange and surreal farce'

Have you ever had one of those dreams in which reality is slightly out of kilter, with people behaving in bizarre ways? Watching?Habeas Corpus?is rather like that. You laugh out loud a lot, and yet part of you feels uneasy. It's the sort of feeling you get when you walk across a rope bridge, and there's a nagging doubt in the back of your mind as to just how safe the bridge is.

This is a strange and surreal farce that'll make you think twice if you think you knew Alan Bennett, for the simple reason it's quite unlike anything he wrote afterwards. It's a play about our own insignificance, love, if such a thing really exists, and lust. Unlike most farces,?Habeas Corpus, Altrincham Garrick's latest production, has depth and substance and it is the sort of piece you'd ideally need to see twice because some of the humour is so subtle you could easily miss some of it first time round.

I saw the professional production that came to Greater Manchester in September last year and I'd say this is better. Director Barry Purves makes full use of the Garrick's more intimate auditorium and not a word of Bennett's sublime script is wasted. I also felt more involved in what was going on. Barry has also created a set that conjures up images of genteel conversation over afternoon tea, while in reality, the characters in the play are anything but genteel.

The performance of the evening comes from Geoff Holman as the incurably randy Dr Arthur Wicksteed. Geoff is quite brilliant as the medic with the wandering hands, delivering each line with laser guided accuracy and revelling in his character's glorious amorality. I do wish he'd do more at the Garrick, because this really is a performance to savour. Alison Davies, who many of you may know from her numerous appearances in Trafford's amateur musicals, certainly hits the right note as Arthur's frightful Hyacinth Bucket style wife Muriel and Leila Glancy is terrific as the couple's nosey parker of a cleaner Mrs Swabb.

It is hard to believe that Alan Bennett, the genius behind ?Talking Heads?, ?The Madness of King George? and ?The History Boys? came up with something as different as ?Habeas Corpus?, a farce about the sexual desires of a disparate group of people. It shows its age when it refers to the ?permissive society? but still possesses innuendo-filled charm. This is another highlight for the Garrick and the timing is perfect. I sometimes wonder how they manage to come up with a bottomless (a good word in view of the play?s subject) string of talented actors. They found twelve, all equally good.

This production is, in my opinion, far better than one I saw at a professional Manchester theatre only recently. It must be because of the imaginative, lateral thinking of director Barry Purves. He sets a happy note from the start when his characters dance around a maypole. I like the lively way Alison Davies gets into the skin of supposedly respectable but randy Muriel Wicksteed, a Hyacinth Bucket-type, who sets her cap at anything in trousers and, in particular, a prosthetic breast salesman (Neeraj Pathak) who mistakenly inspects her very real, ample bosom in the belief that it is false! The firm he works for deliver a spectacular example of re-formed womanhood to Mrs Wicksteed?s sister-in-law, Connie. It falls to Caroline Hickey to spell out how bored Connie is after a 10-year relationship with the less than engaging Canon Throbbing (Alex Wilson) and leads us to suspect that her transformed figure is not intended to make the Canon throb but someone else.

Dr Wicksteed?s appetite is even more insatiable than his wife?s. As a doctor, there could be no better place to ?work? than in his surgery. No excuse is needed for disrobing and Geoff Holman?s extrovert character has an uninhibited free rein. He particularly enjoys ?examining? the curvaceous Felicity Rumpers played with unremitting energy by Nikki Smith. He is not alone, so does his wimpy son, Dennis (Mark Butt).

Another medic is Sir Percy Shorter, President of the BMA who turns out to be Felicity?s father after an indiscretion during an air raid. Despite his position, Brian Stoner?s Sir Percy is as randy as the rest. The play surprisingly contains rhyming couplets but the funniest delivery is a one-liner by Felicity?s mother. Lady Rumpers (Sonia Dykstra). Describing Felicity?s conception during an air raid she says ?I saw him only in the light of a post-coital Craven A?. This scene includes another trick by the director that I won?t give away.

Leila Glancy, as Mrs Swabb, the cleaning lady, acts as a sort of nosey MC chucking sweets into the audience as she gossips about the other characters. Habeas Corpus is a legal term about appearing in court but translated literally it means ?You should have the body?. Well you certainly have plenty of body in this production. I lost count of the number of trouser droppings.

Comedy and tragedy
By Staff reporter

YOU get the impression, when talking to Barry Purves, that he might, just might, be an admirer of Alan Bennett. When it comes to singing the praises of the playwright who has brought us classics like the?Talking Heads?monologues and?The Madness of King George, he doesn't exactly hold back.

And Barry, who is directing his 1973 farce?Habeas Corpus?for Altrincham Garrick, also believes the Leeds born master craftsman is this country's greatest living playwright.

"What's so good about Alan Bennett plays is they're beautifully constructed - they are funny, but there's always something sad going on underneath. All his major plays manage to combine comedy and tragedy," he says.