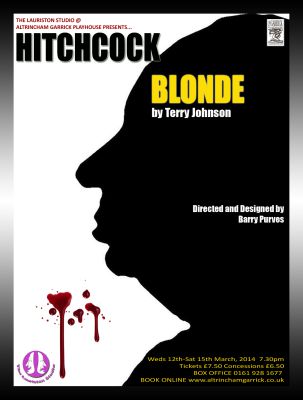 A media lecturer and his female protege find some deteriorated Hitchcock footage. It would appear they had discovered some early rushes but what film were they for and who is the mysterious blonde? Hitchcock Blonde is not a play about Alfred Hitchcock, though he may make a cameo appearance.

WARNING: This production play contains very adult themes of a sexual
and violent nature and partial nudity, together with bad language in the
context of the script – NOT SUITABLE FOR CHILDREN

If the online booking is showing a FULL HOUSE – please check directly with the Box Office for the latest news of returns or any additional seats becoming available for this production.

If you would like to have the latest Garrick News e-mailed to you directly, then please subscribe to our News ‘blog’ on the?front page? and be sure of not missing any of our latest announcements.

by Julia Taylor for remotegoat

Congratulations to the Garrick Theatre for having the courage to put on Terry Johnson?s macabre play Hitchcock Blonde.

The cast of just six is ideal for the confines of this small stage in their Lauriston Studio, at the rear of which is a shower room reminding you of Psycho but used for other purposes, too.

We see Alex, a lecturer with a passion for old film and his student- known simply as The Lecturer and The Student - in a Greek villa examining dusty remnants of what is presumed to be rediscovered Hitchcock footage.

The interaction between these two is vital and Mark J Edgar and Natalie Hinchcliffe get the relationship just right.

You sense his mild interest in her, apparently unreciprocated, turned on its head when she falls in love with him just when his interest has waned. You can only conclude that his obsession with Hitchcck totally outshines any interest in the opposite sex.

Another couple whose relationship requires cutting edge interpretation is between Hitchcock and a blonde.

Your pulse misses a beat when Mark H Edgar appears as the great movie man.

It is quite uncanny how his mannerisms and appearance are so similar to Hitchcock.

It?s 1959 and we see him attempting to dominate yet another peroxide blonde bombshell into appearing in the shower scene in Psycho.

Hitch?s obsession with blondes is well known although his sexuality is open to question. Edgar, gets across something of the mystery of the man who in many ways, is repulsive. You feel he prefers to leer at women rather than touch them.

The unnamed married blonde is played by attractive Beverley Stuart-Cole. She, too, grasps the importance of the relationship between her character and the movie maker.

Throughout we can see Jack Richardson at his technical desk controlling the sound of the shower, background Hitchcock themes and atmosphere enhancing lighting.

It was good to see the Lauriston full for this disturbing play.