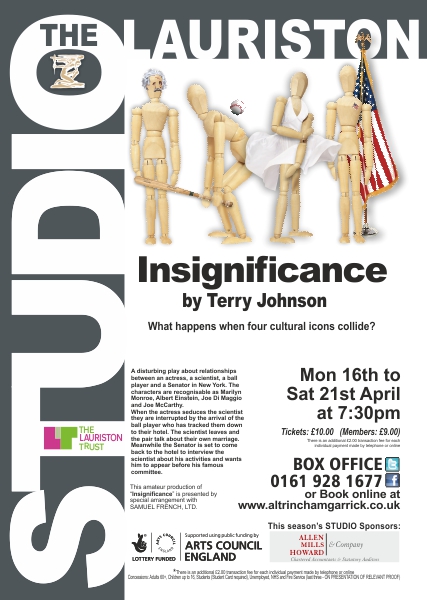 A very funny, fast moving, disturbing and intelligent play, where four cultural icons from different walks of life implausibly meet in a New York hotel room in 1953. Einstein, Marilyn Monroe, Senator McCarthy and Joe DiMaggio argue about life, fame, sport, the threat of communism, sex, nuclear physics, Hollywood and the atomic bomb. Oh, and the need for a normal life.

Although they are only named as the Actress, the Professor, the Sports Star and the Senator, it is obvious who they are in Terry Johnson?s play, Insignificance,

In one of many fictional meetings, Marilyn Monroe reels off the Theory of Relativity to an Einstein who is more interested in her charms. This scene is a tribute to the talents of Marcella Hazell who in a complicated monologue illustrates Monroe?s neglected intellectual side and her hopes and fears. When Monroe and Einstein are about to clinch, in walks Marilyn?s husband, Joe DiMaggio. Steve Connolly plays him as not the brightest cookie in the jar, appearing yobbish compared with the scientist.

Senator Joe McCarthy (Dave Midgley) is a bully as he not only attempts to make Einstein appear before the House Un-American Activities Committee because of his “subversive” past, but also physically hurts the pregnant Monroe. In this remarkable play, McCarthy?s aggression is eventually quelled and, Joe DiMaggio becomes more sensitive, which adds to its depth. Monroe puts away her sexy little girl voice to reveal her frustration with life.

Richard Sails, who plays Einstein with his ruffled hair and broody manner, makes his character more human and reveals his one big guilt.

Thanks to directors Geoff Holman and Kathy Searcy, we get into the minds of the characters, although I don?t think the supposedly flashing neon lights quite work.

But well done props team for all those objects Monroe uses to illustrate her theory.

* Insignificance is at Altrinchnam Garrick?s Lauriston Studio Theatre until Saturday. 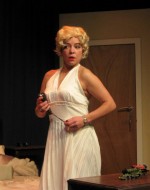 This season?s productions in our Lauriston STUDIO have been sponsored by

This amateur production of ?Insignificance? is presented by special arrangement with SAMUEL FRENCH LTD.