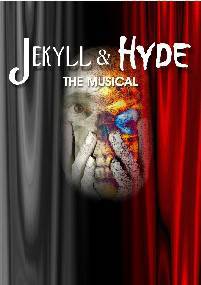 For the Garrick
Musical Direction by Mark Goggins

Based on Robert Louis Stevenson’s story about a doctor whose experiments with human personality create an evil and murderous counterpart. Convinced the cure for his father’s mental illness lies in the separation of Man’s evil nature from his good, Dr Henry Jekyll unwittingly releases his own dark side, wreaking havoc in the streets of 19th century London as the savage Edward Hyde.

It is pure, pulse pounding theatre with a lush, romantic score.

Even when he's not wreaking havoc on the streets of Victorian London we see how Dr Jekyll's experiments impact on the nice side of his character, with his menacing mood swings. In short, Martin Bradbury is the consummate performer. He has a voice to die for - please pardon the pun - and he's also a highly accomplished actor.

Indeed the performances of all the principals are of a professional standard and my jaw nearly hit the floor when I heard Vicki Stott (Emma Carew) and Sally Eggington (Lucy Harris) sing for the first time. Director Terry Chandler, the Garrick's very own King Midas, must have thought all his birthdays had come at once when these three turned up at auditions.

The Garrick may be a 400 seat theatre but there's a real feeling of claustrophobia while watching this production. You feel trapped in a nether world of perpetual darkness, a world straight from your own worst nightmares. This I put down to Barry Purves, who has come up with yet another ingenious set.

But what really makes me mad is that a show of this quality played to a half full house on Tuesday night. If there's any justice out there, the box office phone should be ringing off the wall by the end of the week.

Amateur theatre can, sometimes, come up with a show that is equal to anything you would see in the large, Manchester theatres. This was the case with Altrincham Garrick?s production of?Jekyll and Hyde, the Musical, which received a standing ovation. Robert Louis Stevenson?s horror story of a man whose experiments lead him to become two people in one body ? nice Dr Jekyll and wicked Mr Hyde, is a rattling good tale. Frank Wildhorn?s music and Leslie Bricasso?s lyrics make it even more powerful, illustrating, not only the conflict between good and evil but the difference between love and lust.

The star of the production is Martin Bradbury. He is a Dr Jekyll with a strong voice who capably tackles the difficult key changes he has to perform. His transition from the good, pony-tailed Dr Jekyll to the malevolent, unkempt Mr Hyde is dramatic and shocking. At one point he even sings a duet with himself. His hair is divided into two halves, one pony-tailed, the other dishevelled. He effortlessly tackles the feat of turning one way to be Dr Jekyll and, the other, Mr Hyde.

At the point of his first transformation, Martin sings the show?s key number, ?This is the Moment? and I would use those words to say to him ?This is the moment you must turn professional?. Such talent should not be wasted on the amateur stage. The chorus were dexterous in tackling songs such as ?Murder, Murder? which had multiple harmonies and the supporting cast were good, too.

I must mention the fine performances of the two women in Dr Jekyll?s life - Vicki Stott as his fianc?e, Emma Carew and Sally Eggington as Lucy Harris, a prostitute doomed to die at the hands of Mr Hyde. The loyal Emma and the seductive Lucy sing a duet ?In his Eyes? with such feeling it almost induces tears.

The constant scene changes on the revolving stage are a credit to set designer, Barry Purves and Mike Shaw and his team come up with imaginative costumes. I especially liked Emma?s Victorian wedding dress.

It must be remembered that the Garrick is not a musical theatre company and usually does straight plays. It is a credit to Director, Terry Chandler that he got such a wonderful response from his cast.