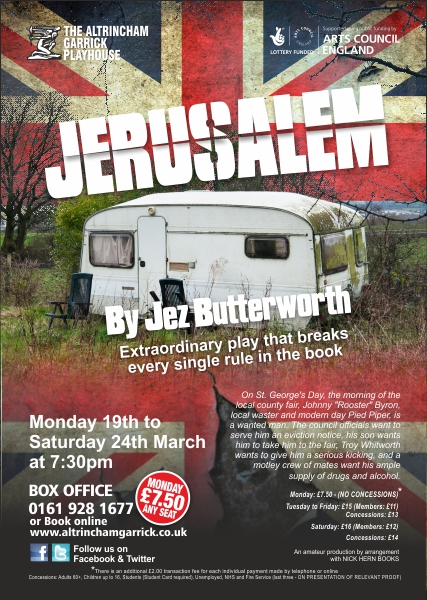 Extraordinary play that breaks every single rule in the book

Jez Butterworth’s Jerusalem set on St. George’s Day in a Wiltshire village, has been described as an instant modern classic, a hymn to both the old England of folk tales and rural mystery and a lament for the housing estates and petty officialdom that are screwing it up. It is a defiant celebration of freedom, yet at the same time one feels an undoubted sympathy for any proud householder who finds himself living near a man like Rooster Byron. Rooster is a charismatic gypsy character, loved and admired by many, despised by a few and a thorn in the side of the local authority.

A brand new production of a Tony and Olivier Award winning play.

I have been reviewing at this theatre for more than 20 years and in that time I’ve had the privilege of seeing some truly great performances. But I can’t remember the last time a performance actually brought me to my feet. That said, actors of the calibre of Scott Ransome don’t come along very often, do they. He plays Johnny “Rooster” Byron, a charmless, amoral waster who refuses to live by society’s rules quite brilliantly. He expertly tackles the sort of character who’d sell his own grandmother if e thought he’d gain from the transaction but, despite his many faults its hard not to be captivated by this larger than life low life. For the local young people, for “local young people” read waifs and strays, he’s like the Pied Piper, his shabby caravan a Mecca for drug using party animals. But his drug and booze fuelled existence is under threat, by developers desperate to get their hands on the land he lives on. Byron is one of the most fascinating characters in contemporary drama for me and Ransome gives him the five star treatment when it comes to bringing Jez Butterworth’s classic creation yo life. However, it would be wrong to refer to John Cunningham’s perfectly observed production as the Scott Ransome Show. A strong ensemble also plays it’s part in making this trip to the other side of the social tracks a truly memorable one. I really liked Matthew Banwell as the rule bending landlord Wesley and the always watchable Mark Butt as Ginger, who dreams of being a celebrity DJ one day. I hope this play, a masterpiece in so many ways, gets the houses it deserves and people are brave enough to see beyond the strong language. Some of Butterworth’s dialogue is superb. Star rating ★★★★★

The Garrick’s powerful, dark drama is not for the faint hearted

THE Garrick’s latest production is Jez Butterworth’s controversial Jerusalem, a dark, adult comedy. The Garrick is brave to put on such a controversial play which is like a breath of fresh air. The central figure, Johnny ‘Rooster’ Byron is played uninhibitedly by Scott Ransome. He?s a wastrel and modern day Pied Piper, an alcoholic, drug dealing teller of tales. Rooster is threatened with eviction from his Gypsy-style caravan and curses Kennet and Avon Council. It’s the annual St George’s Day Flintlock Fair and his 10-year-old son (Sebastian Ross) wants his father to take him but, in his usual antagonistic fashion, he refuses to do so. Scott, an utterly believable tough cookie, looks down on Wesley, the publican (Matthew Banwell), who has to wear morris dance gear in order to re-enact an old custom. Rooster almost becomes a folk hero since eccentric losers and kids who he rescues from unpleasant fates, adore him. Scott’s performance is one of the most powerful, emotional acting displays I’ve seen in a long time.Then there is the sadistic stepfather of Phaedra (Zoe Cummins-White), the May Queen. He is played outstandingly by David Lemberg. Ginger, an old friend, who mixes in the same motley circle and sticks by Rooster is another great character.It?s hard to believe that this ruffian is the same Mark Butt who was Thomas Cromwell in Wolf Hall. Well done, Mark.They all contribute to a host of colourful village characters but the most colourful has to be Rooster. The set is designed by Trevor McKie and John Cunningham who also imaginatively directs the play. It illustrates Rooster’s caravan home, and the scattered scruffy furniture outside in Rooster’s wood. Star rating ★★★★★

An amateur production presented by arrangement with NICK HERN BOOKS