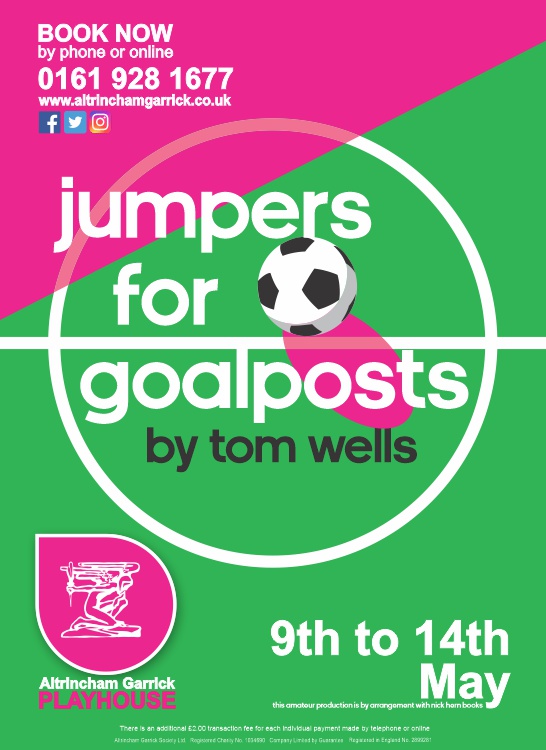 A hilarious and heart-warming comedy about football, friendship and finding your way.

“Barely Athletic” are part of a four-team five-a-side LGBTQ+ football league which Viv, their bullish head coach, is desperate to win. Or if they can’t win, at least they should try not to lose. Chucked out of the “Lesbian Rovers” for being too bossy, she desperately tries to instil some competitive spirit into the boys. Problem is, Beardy Geoff is copping off with the opposition, Danny is nursing a painful secret, Luke only joined because he fancies Danny and Viv’s brother-in-law Joe is trying to cope with his grief after losing his wife. Together, they might just be able to claw back up from the bottom of the league…

Tom Wells’ drama bears the hallmarks of his warm comedic style, which were displayed in his previous hit play “The Kitchen Sink”, and is a paean to the virtues of friendship and love.

Jumpers for Goalposts premiered at Watford Palace Theatre in 2013, before touring the UK, including a run at the Bush Theatre, London. 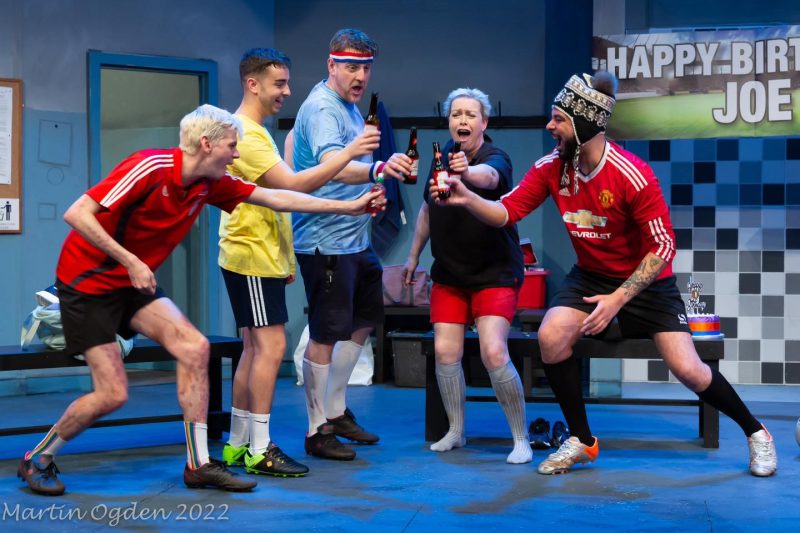 Review by Rick Bowen at Stagestruck

JUMPERS For Goalposts will, on the evidence of Monday night’s performance, attract a different, younger audience.

For far too many years Altrincham Garrick has been seen as a safe night out for older people and the appointment of artistic director Joseph Meighan, a dynamic and adventurous twenty something, is about to change that misguided perception.

A quiet revolution is taking place on Barrington Road and it feels so exciting and exhilarating to be part of it.

But this theatre is working hard to get the message across that the Garrick is a theatre for everybody. All power to their elbow, say I.

Jumpers for Goalposts follow the misfortunes of Barely Athletic, a five-a-side team largely made up of gay men who struggle with the basics of the beautiful game.

This doesn’t stop Viv, their straight talking coach with a very short fuse, encouraging her clueless charges to try to win the league in which they play.

It’s certainly a league with a difference – one team plays in drag!

The play takes place in the club’s dressing room, an ideal backdrop for writer Tom Wells to delve into the private lives of the players, including a burgeoning relationship between Danny and Luke.

Danny carries a secret that he feels unable to share with the child like Luke, a lovable geek and a study in social awkwardness.

Joe Meighan, who directs this engaging, absorbing and heart-warming comedy must have thought all his birthdays had come at once when Dan Ellis and Mason Lockwood turned up to audition for these roles.

If anyone was ever born to play these parts it’s these two actors and Lockwood, who gets the funniest lines as Luke, displays a sense of comic timing that is simply second to none.

Beverley Stuart-Cole is highly believable as Viv, Sebastian Farrell is also enjoyable as the team’s token straight man Joe, aka the keeper who couldn’t catch a cold and Lewis Sewell is perfect as the crackpot Beardy Geoff.

Throughout the production the cast convinces the audience they’re watching a real football team, complete with the personality clashes you find in all organisations, sporting or otherwise.

They say football is a game of two halves and that old adage can certainly be applied to Jumpers for Goalposts, with the best one liners saved for the second half.

While this play contains some strong language it’s in context and gives the play a realistic feel. It’s sure to strike a chord with anyone whose set foot inside a sports club’s dressing room while not alienating those who haven’t.

Great fun, with a dash of poignancy thrown in.

In aid of The George House Trust.