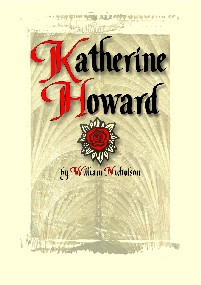 William Nicholson?s play takes a slice of Tudor history and turns it into pure theatrical magic.

A touching May ? September romance; political intrigue, plots and betrayals; a pointed and sometimes comic portrayal of women?s lives in Tudor times: all these and more, are elements of this entertaining, thoughtful and intelligent play from the author of?Shadowlands.

Having sat through one historical drama that bored the breeches off me, I turned up at Altrincham Garrick seriously expecting not to enjoy?Katharine Howard. Silly me.

William Nicholson has created a play that captivates, engrosses and moves in equal measure. It also humanises King Henry VIII and one of his six wives who ended her life a few inches shorter than she began it. Director Val Watkinson has chosen the soundtrack of a well known romantic movie - I won't spoil the surprise for anyone going to see it - and it works wonderfully well.

I've seen Allan Taylor grace this stage on numerous occasions and this performance as the ageing fast King with the bulging waistline and the gammy leg has to be one of his finest. You really do feel for him as he struggles to come to terms with his wife's apparent infidelity. This is, after all, the woman he once idolised and the woman who infused his creaking body with renewed, youthful vigour. His performance and that of the lovely Jennifer Wilson as Katharine are of a professional standard and when Katharine was in the deepest throes of despair the audience listened captivated, silently hanging on her every word. Both performances represent high water marks in the careers of these two actors.

It would be impossible while reviewing this production not to mention the Garrick's sartorial magician, Mike Shaw, and the rest of his wardrobe team. They have created costumes to die for - if you'll pardon the pun. I bet one or two societies just might want to hire these in the future and the whole stage is awash with a parade of sumptuous colour.

At two hours 45 minutes including an interval,?Katharine Howard?may sound like a long night but, thanks to the director and the cast, the time flies. If you had any lingering doubts about going to see this one please, please put them out of your mind.?Katharine Howard?represents yet another major triumph for the Garrick theatre.

Certainly not a dry history lesson
By Rick Bowen

If you go to see?Katherine Howard, Altrincham Garrick's next production, you may feel like you're watching a film. That's because director Val Watkinson is blending music with the action in a bid to give the play a cinematic feel. Although when it comes to the identity of the music she'll be using she makes me swear an oath of secrecy - Val wants to spring a surprise on Garrick audiences.

However, one thing she does want to shout from the rooftops is that William Nicholson's play isn't a dry history lesson. The piece, which traces the relationship between King Henry VIII and one of his string of doomed wives does, she insists, have a few laughs in it.

"You wouldn't think it would be funny but there are some very, very funny moments in it. It's very good and Mike Shaw and his team have created costumes to die for," she says.

William Nicholson was the writer who gave us the play?Shadowlands, the touching story of the relationship involving two lovers who were also to be parted by death - the novelist CS Lewis and the American poet Joy Gresham. Historical dramas are something of a novelty for Val, whose only previous brush with the genre was?Amadeus, which she directed at this theatre.