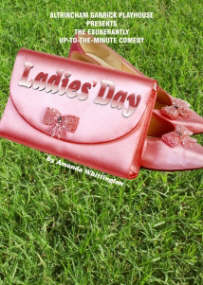 Work, love and life are just one long, hard slog for the fish-filleting foursome Pearl, Jan, Shelley and Linda. But their fortunes are set to change when Linda finds tickets to Ladies’ Day at Royal Ascot the year it relocated to York. Out go the hairnets, overalls and wellies as the four ditch work, do themselves up to the nines and head off to the races for a drink, a flirt and a flutter. If their luck holds, they could hit the jackpot – and more besides.

ALTRINCHAM Garrick has chosen the warm and funny “feel good” comedy ‘Ladies Day’ as its penultimate play of the season. We follow a group of Hull lasses as they go in search of fun, glamour and the odd, stray millionaire at Royal Ascot. This year the red letter sporting event has been moved to York racecourse which means our ladies don’t have too far to travel, although when they arrive they feel like they’re in another world. As far as comedies are concerned, ‘Ladies Day’ doesn’t break the mould. However, the characters are very, very likeable and writer Amanda Whittington has put some wonderful lines into her characters mouths. My particularly favourites were the homely girl next door Linda, expertly played by Siobhan Morgan, and Victoria Johnson (Jan) makes a great drunk, the scene made even funnier by the fact Jan can’t handle booze. Graham Simmonds plays five roles and is at his most convincing as the smarmy, skirt chasing racing commentator. Director Maureen Casket has created a production that canters along at a perfect pace and the poignant parts of the play have just as much impact as the many humorous scenes. Light and fun – just what we need in these difficult times. But the scene with the whingeing jockey went on a bit too long for my liking. Star Rating ★★★★

Ladies’ Day is about four Yorkshire fish filleters who go posh by attending Ladies’ Day at Ascot, the year it was relocated to York, and reveal secrets about themselves. This is an amusing choice of subject by the writer, Amanda Whittington and gives the audience (including me) a lot of laughs. The four working class Yorkshire women discard their hair nets, overalls and wellies on stage and, before our eyes, dress to the nines and head to the races for a drink, a flirt with posh people, and a flutter. It is lady luck who provides the tickets when they are all sold out. And lady luck stays with them when their horses keep winning – but she appears to depart before the end. It is the brassy Shelley (Lisa Nivern Banks) who enjoys the experience the most. She is fame-obsessed and a would-be celebrity who thinks she might find a rich man to make her dreams come true. And, by changing her name to Sahara, nearly does! Despite her faults, she has a heart of gold. Lisa adds endearment to a character who could so easily be simply a crass chatterbox. Fellow filleter Linda is different. A quiet, naive 19-year-old, she, too, has an idol. He is pop singer Tony Christie of Is This The Way To Amarillo fame. Siobhan Morgan who plays her, makes you realise that her character needs something to cling to and help her escape from her mundane life. And she finds it. Single mum, Jan (Victoria Johnson) has created a celebrity of her own in the form of her daughter who has been the centre of her universe. When the daughter leaves home, Jan is left alone, unable to cope with her newfound freedom. Victoria gives a fine performance in this role. The scene when she staggers around drunk is hilarious. The strongest of the quartet, Pearl, is older and seemingly wiser than the others. She is leaving work to spend more time with her hubby. But she has the biggest secret of all – and you must hand it to Janet Slade, who plays her – and she hits a heartstring when she reveals it so movingly. The comedy wouldn’t be balanced without the presence of men. And, believe it or not, Graham Simmonds plays six of them. I might add they are six of the best and you always know who is who. I especially like his Irish jockey describing the thrill of riding a winner. Star Rating ★★★★