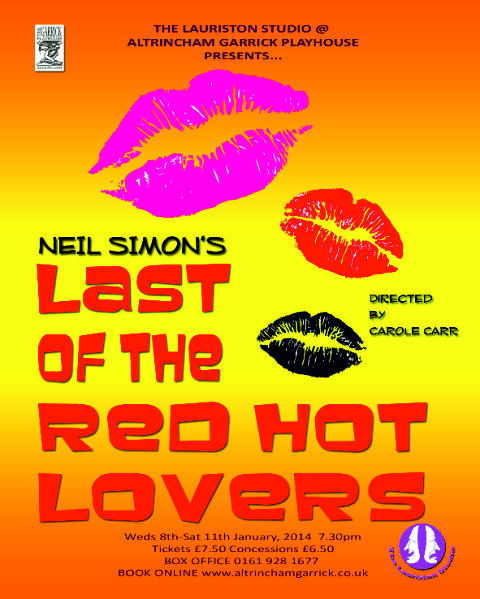 Barney, who has been married to an irreproachable wife for twenty-three years, feels the urge to join the sexual revolution before it is too late. Taking advantage of the fact that his mother’s flat is unoccupied two days a week he invites three women to his lair in succession. With no experience of adultery he fails on each occasion. As the play ends he is telephoning his wife – to meet him that afternoon in his mother’s apartment.

Neil Simon?s 1969 play, Last of the Red Hot Lovers, is ideal for the Garrick?s tiny Lauriston theatre. It shows that great writers can come up with plays that don?t require a large stage.

The set creates the image of a large apartment even within that confined space.

I like the way Director, Carole Carr, ensures that each act is introduced by appropriate sixties music.

The New York accents aren?t as accurate as they might have been but, since the story could have been set anywhere in the world, I don?t think it matters that much.

The title is appropriate. After all, the sixties was a time for free love. The central character, Barney Cashman wants to put his 23 year old marriage to his high school sweetheart on hold and taste some red hot love himself.

In that role, Malcolm Cooper makes good use of Simon?s amusing one liners as we see him progress from fish restaurant owner to gigolo growing in confidence along the way.

Malcolm is on stage the whole time and we come to appreciate his different techniques to get a woman. His expressions say it all.

Sadly, none of his approaches to three different women scores which makes the situation even funnier.

You must praise all three lady thespians who play the women Barney entices into his mother?s apartment.

The first is Elaine Navazio, a well endowed married woman who Barney meets in his restaurant.

She could potentially have been his first conquest but you suspect that Barney is terrified when she warms to him before suffering a bout of coughing which leaves her crying for a fag.

Lise Banks? Elaine oozes sexuality both in voice and mannerism. She produces some realistic coughs as she begs for another cigarette.

Emma Toms? Bobbi Michele, a thoroughly modern miss, is his next target. She is completely mad and in an unforgettable scene, persuades |Barney to share a joint of weed. This calms not only his nerves but also his libido!

Finally, we meet the friend of Barney?s wife, Jeannette Fisher. Margaret Leslie makes her a right little ray of sunshine (I don?t think). Dowdy and depressed, even the offer of champagne doesn?t raise her spirits.

Suffering from melancholia, she is seeing an analyst

After three put downs it doesn?t take long for Barney to recognise that the grass isn?t always greener on the other side of the street as it slowly dawns on him that his wife is the best bet.