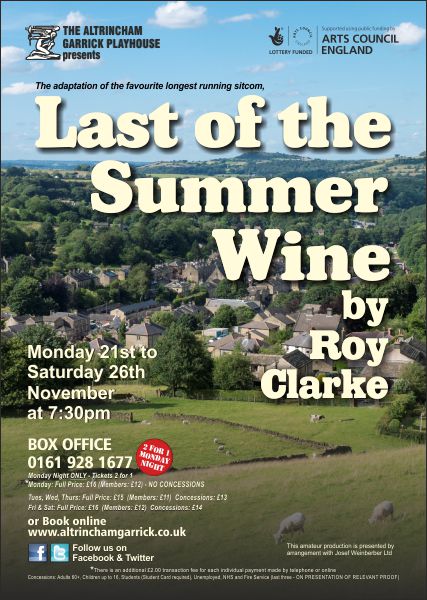 In this new stage adaptation of the timeless television series, Foggy, Clegg and Compo are reunited for one last adventure. Foggy has designs on winning the affections of Constance, Nora Batty’s niece and the long-suffering fiance of the hapless Gifford Bewmont. With the help of Clegg, Foggy invites the ladies around for an evening’s entertainment but the duo are unaware that a mysterious flasher is stalking the local community. Gifford has pledged to apprehend the flasher and has mounted all-night patrols in the village. While awaiting the arrival of the ladies, Foggy is dismayed when Compo turns up unannounced and who proceeds to wreak havoc on Foggy’s careful preparations as Gifford’s efforts to capture the flasher lead to mistaken identities and even more chaos. When the flasher is eventually unmasked it turns out his intentions are benign but not before our heros are nearly undone by the enveloping madness.

THOSE much loved characters from Last of the Summer Wine, Foggy, Compo and Clegg – are brought to life on the Garrick stage by Aidan Kielty, Barry Spencer and John Westbrook. Television is, after all, only two dimensional whereas live theatre is three dimensional. So, creator, Roy Clarke, has made his characters larger than life. Foggy,that former military man, decides he’d like some female company and invites Nora Batty (Christine Perry) and her niece, Constance, (Paula Keen) for tea at Cleggy’s. Before he knows it he’s engaged to Constance, much to the consternation, not only of Foggy himself, but of her long term boyfriend, Gifford, the bobby (Bryn Thomas). Both men’s faces are classic! These three are all true to type and funny but Barry Spencer’s Compo is the nearest to his TV counterpart. There’s a hilarious scene when he gets his hand stuck in Nora’s bra! Add a flasher and the plot thickens. That role goes to Sean Duvall who in his twin mackintoshes looks every inch the part as he measures inches with his mechanical inside leg detector. He turns out to be a different sort of flasher. You’ll never guess how. The women are equally good. I especially like Christine Perry’s bossy Nora Batty. The Garrick have re-enacted TV programmes successfully before and have done this difficult task well once more – thanks to the excellent direction of John Chidgey and Rani Jackson. Star rating ★★★★

SOME of the jokes in this stage adaptation of the much loved TV comedy are just plain daft. But in a world that seems suffocated by seriousness, what’s wrong with that? The central characters, Foggy, Clegg and the sartorially challenged Compo are old enough to know better. Acting your age can, however, get rather boring. This production has evidently been lovingly nurtured by director John Chidgey and his right hand woman Rani Jackson, so it captures the wacky warmth of the original. While at the same time not attempting to be a carbon copy. Aidan Kielty, John Westbrook and Barry Spencer put their own stamp on the roles of Foggy, Clegg and Compo. However, there are times when John’s delivery makes him sound remarkably like Peter Sallis, who played Clegg on TV. I always thought of Clegg as the more cerebral, more refined of the three. Love is in the air for Foggy, who has set his cap at Constance, played by Paula Keen. Foggy obviously likes a challenge, as she’s related to the battle axe par excellence, Nora Batty (Christine Perry). You just know his plan is set to backfire when Foggy invites the duo to his house for tea. For me, the performance of the evening comes from Bryn Thomas as Gifford, the local bobby. This is a great role for Bryn who is especially funny when his character has had far too much of the falling down water.Last Of The Summer Wine only occasionally tickles my funny bone. That said, I have to take my hat off to all concerned for a job well done. Or should that be my flat cap?