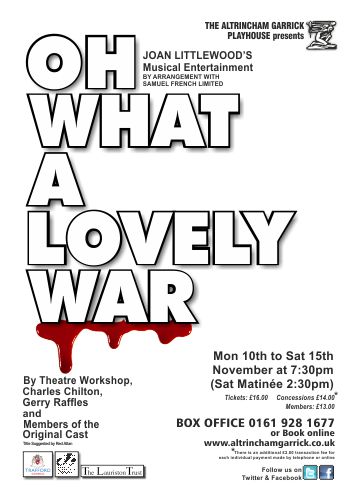 To mark and celebrate the 100th anniversary of the Great War in 1914 we are proud to present the hugely popular play including great songs based on stories and songs from the Music Hall period. The original production in 1963 had a tremendous impact and set out to change attitudes to war using a devastating and successful theatrical style. There is humour and irony to be found even in this tragic event. With famous songs like ‘Pack up your Troubles’ and ‘They didn’t believe Me’- join in the fun and memories in this great piece of theatre. 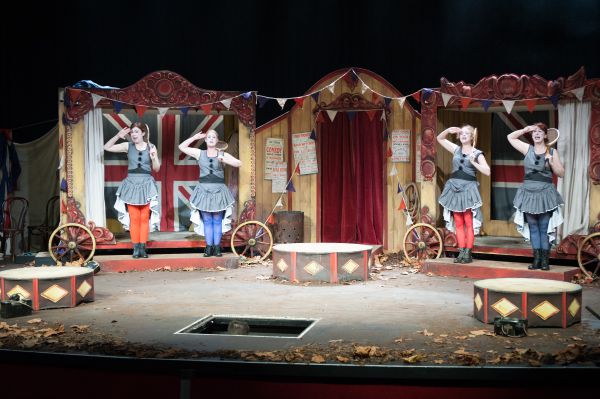 Comments Posted to our Twitter Page during the week from some of the audience:

The Set – at the planning stages!

It is apt that Altrincham Garrick should put on Oh, What a Lovely War during the centenary commemorations of the Great War between 1914 and 1918. Joan Littlewood’s 1963 musical illustrates the futility of battle by using contemporary songs such as Keep the Home Fires Burning and Pack up your Troubles to recall the brave attitudes of the time. The singing and dancing are good and accompanied enthusiastically by musical director, Simon Murray on keyboard. The dancing is well choreographed by Celia Bonner who also directs. The sounds and flashing lights of shells created by Christine Mills and Lauren Sanders are so realistic that you jump. Casualty numbers, which in total amounted to 37 million, are projected on the white curtains of a Pierrot show and, together with original photographs, recreate four years of horror. Even so, most of the show is light-hearted. That is especially true of Scott Ransome’s comic cut performance as a sergeant drilling his troops with deranged fervour. Many of the cast sing solos and duets but this show is a team effort and it would be unfair to single out some and not others. A memorable scene features Christmas Day 1914. For 24 hours only, enemies become friends as they swap gifts and sing carols. Despite the trauma of war, you can still enjoy the songs and subtle humour in this show.

Glimmer of Hope and Carnage

Oh what a lovely idea for Altrincham Garrick to put on Oh, What a Lovely War in the centenary year of the Great War between 1914 and 1918. Joan Littlewood’s 1963 musical, presented in the guise of a Pierrot show, illustrates the futility of battle with popular songs of the time such as Keep the Home Fires Burning and Pack up your Troubles in your old kit bag.?The singing and dancing by a lively cast is good probably because Simon Murray?s accompaniment on keyboard is so invigorating. It is a team effort so I won?t name individuals. The sound and light of shells created by Lauren Sanders and Christine Mills are so realistic they make you jump. Casualty numbers and original photographs are projected on the white curtains of the Pierrot Show to recreate the four years of carnage. Scott Ransome gives a comic cut performance as a sergeant drilling his troops with deranged fervour. There is an unforgettable scene of hope amongst the horror when, on Christmas Day, 1914, the British and German troops leave their trenches to give presents and sing carols. A lump comes into your throat when the Germans sing Stille Nacht, Heilige Nacht (Silent Night). It’s an unpalatable fact that over 37 million members of the military and civilians were casualties of the war to end all wars. Nevertheless, you will still enjoy the songs and the subtle humour of yesteryear.