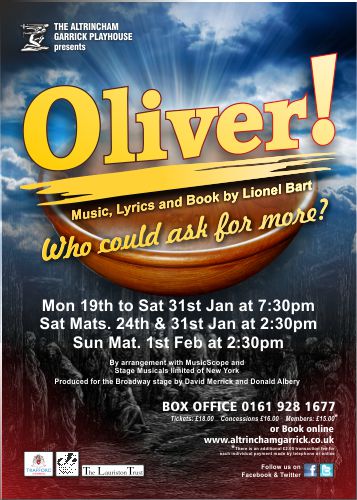 By arrangement with MusicScope and
Stage Musicals limited of New York

The Garrick is thrilled to offer another treat for the Christmas season! Lionel Bart’s brilliant adaptation of Charles Dickens’ Oliver Twist has enjoyed sell out runs since its London premiere in 1960 and the award winning screen version in 1967. The famous story of orphan Oliver and his sometimes frightening journey to London where he encounters the dubious friendship of the artful dodger, Fagin and Bill Sykes is packed with favourite songs including, ‘Food, glorious food’, ‘Consider Yourself’, ‘I’d Do Anything’ and the classic, ‘As long as he needs me’. This new version will bring the Victorian streets of London to life again and is sure to leave you asking for more!

One to watch – Nathan Ng as Oliver

I can remember as a child being absolutely petrified of the Bill Sykes character in the big screen version of Oliver! A tribute, of course, to the considerable acting skills of the late Oliver Reed, who was far more than just a headline making hell raiser. Likewise, Charlie Tomlinson oozes menace as the notorious baddie in Altrincham Garrick’s triumphant production of Lionel Bart’s classic show. The directing team, the dream team, that brought us Gypsy earlier in the season have been re-united for a musical that deserves far more than the empty seats that greeted me on opening night.?No excuses – the TV isn’t that inspiring and the weather not that bad. I studied in Sheffield where the climatic conditions we currently find ourselves in would have been considered balmy. Well no, but you get the gist. Nathan Ng strikes the balance between being suitably cherubic and endearingly feisty as Oliver and he’s sharing the plum role with Michael Gaughan. I hope you like a challenge Michael, as Nathan also has one of the purest singing voices I’ve ever heard. You’ll be biting your bottom lip during the beautiful number, Where Is Love For me, that’s not the best song in the show. Who Will Buy? during which Oliver is serenaded by an assortment of street vendors congregating below his bedroom window, is my personal favourite, beginning as it does with a haunting solo. Doubling up seems to be the order of the order of the day here, with Stephanie Niland sharing the role of Nancy, Bill Sikes’ long suffering but bafflingly loyal girlfriend. Her rendition of As Long As He Needs Me, in which this ultimately good sort tries to put the case for her devotion, is one of the high points of the show. Star Rating ★★★★

An Oliver to be remembered – A show to make you forget your post Christmas credit card bill, Oliver! simply must not be missed.

You start to feel hungry even before Nathan Ng’s Oliver asks for more. Just the sound of 17 boys voices singing Food, Glorious Food with such gusto starts your tummy rumbling. Your appetite is whetted in a different way by the quality of this Dickens’ tale performed by a fantastic cast who are a delight. Young Nathan does wonderfully well in the title role and we are on his side as he faces hardship at the work house, from his undertaker boss, and in the hands of his counterpart, the Artful Dodger, a cunning but likeable Rob Dutton. These two young actors are so impressive, it is hard to realise they are only 12 and 16 respectively. Despite the jollity of the dancing (choreographed by director, David Needham) and songs like Nancy’s Oom-Pah-Pah, this show has it’s sadder moments. The one that stays with you is Nancy’s murder by lover, Bill Sykes. Her loyalty to this evil man is hard to understand and you conclude the only answer is that she loves him. Charlie Tomlinson’s despicable Bill makes scoundrel Fagin, look like an angel. Stephanie Niland sings As Long as He Needs Me both poignantly and beautifully, illustrating well her attraction to this bastard. The quality of Stephanie’s voice is as good as any professional. Although Fagin is a criminal who uses children to pick pocket for him, Steven Finney projects him as an old man who is genuinely fond of them and acts like a father figure. His rendering of Reviewing the Situation is particularly expressive. A word in praise of the ten-strong orchestra led by Steven Mercer. They are the perfect accompaniment to the many catchy numbers but also add atmosphere. For instance, when Oliver is arrested, the violinist, Rachael Drury, creates an element of surprise and dismay by making a discordant screeching sound on her instrument. Some roles are interchangeable over the course of the production.  Other well known Garrick names take over on other nights and because I know them, I can give assurance they will be equally as good as those involved on the first night. The Production Supervisor is Paul Kerryson, the Garrick’s new Executive Producer. If, under his guidance, this show is an indication of what is to come, we are in for exciting times. Oliver is one of the best musicals I have seen at this excellent theatre although I have seen many other good ones as well.

Preview in the Messenger

Planning mischief – Steven Finney as Fagin and his gang in rehearsal

ALTRINCHAM Garrick turns to a giant of musical theatre for its next production, in the shape of the Lionel Bart classic, Oliver! Immortalised on the big screen in a famous movie starring Ron Moody as the slippery petty criminal Fagin and Oliver Reed as the genuinely scary Bill Sykes, Oliver! is crammed with showstoppers that are certain to please theatregoers of all ages. Memorable numbers include Food, Glorious Food sung by Oliver and his fellow orphans and As Long As He Needs Me, performed by Sykes’ long suffering but unbelievably loyal partner, Nancy.