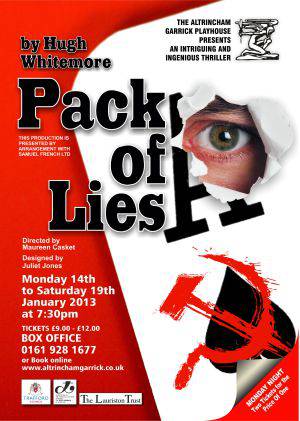 PACK of LIES abundantly demonstrates HUGH WHITEMORE’s ability to choose a real event in recent remembered history to weave his favourite themes of human follies and affections allied to inevitable betrayal by all the protagonists. This intriguing tale concerns true events of the early 1960s. Helen and Peter Kroger, living a seemingly quiet life in a London suburb, together with a certain Gordon Lonsdale, were convicted of spying for the Russians and sentenced to 20 years imprisonment, only to be exchanged 8 years later for a Britain imprisoned in Moscow. The fictional side of the story involves their “friends” and neighbours – an ordinary middleclass family. Barbara, Bob and Julie are catapulted into a sordid world of deception and treachery, with Barbara realising too late that the Krogers had betrayed her and that she, in turn, had betrayed the Krogers.
ABSOLUTELY UNMISSABLE.

Review of Pack Of Lies by Julia Taylor for remotegoat

The Jacksons, a homely couple who have lived in their street for 20 years, are taken aback when, in Hugh Whitemore’s classic, Pack of Lies, MI5 call. To their disbelief, it soon becomes clear that the friendly Canadian neighbours, who often pop in for a cup of tea, have been telling a pack of lies. After people from the intelligence agency survey Helen and Peter Kroger from the Jackson’s bedroom window, they are found to be Russian spies. It is all too much for wife, Barbara (Caroline Hickey) who takes out her feelings on her kindly husband Bob (Nick Sample). She even lashes out at schoolgirl daughter, Julie (Erica Pickard), who knows nothing of what is going on. When she does discover the truth, Erica’s character erupts, melodramatically displaying her horror and disgust. MI5 insist that the Jacksons continue to act as normal with their treacherous neighbours. They don’t find this easy but carry on with the Christmas get together they have already arranged. Ros Greenwood’s Helen Kroger, who uses sociability and apparent scattiness to conceal a laser-sharp brain, quickly senses the tension at the event which she and her introvert, brain-washed, Communist husband, Peter (Graham Simmonds), attend. It’s amazing the two families ever became friends in the first place. The Jackson’s are dull and unadventurous whilst the Krogers – especially Helen in an excellent portrayal by Greenwood – are glamorous. Director, Alan Rothwell, ensures that their differences are emphasised in other ways, too. Barbara wears dowdy cardigans and Bob, run of the mill pullovers. On the other hand, Helen with her sophisticated hairstyle and fashionable 1960’s slacks, oozes glamour which attracts daughter Julie like a bear to honey. Jonathan Black performs well as Stewart, the MI5 official, a formidable yet fatherly figure. Juliet Jones’ set reproduces your typical 1960’s semi with its black regulation telephone, etc. The most amazing thing about this play is that it is all true!

How well do you know your neighbours? Hugh Whitemore’s ‘Pack of Lies’ is adapted from a real-life spy case of the 1960’s and set in a London suburb. Just suppose a very official looking man from the government knocked on your door and asked to place an ‘observer’ to spy on the neighbourhood for the good of the country. This is what happens to Bob and Barbara Jackson and their teenage daughter Julie. But what is supposed to only last a couple of days, turns into weeks and stretches the fabric of the family as they must ‘hide’ the presence of the guests. The Families best friends for near on five years, Canadians Helen and Peter, are suspected of aiding a KGB agent who has stolen NATO secrets. The production pays close attention to 1960’s period details, both in the costumes and the set (complete with running water and functioning kettle – nice!). Barbara’s lowly cardigans contrasted well with the ‘slacks’ worn by Helen, while the succession of pullovers sported by Nick Sample as Barbara’s husband Bob was spot on. The play teases our interest and gives rise to speculation about where the story was going next, with mysterious phone calls from Julies friend and at one point, I even questioned whether Barbara had some part of the ploy as we see her start to buckle under the pressure. The blackouts were covered as well as they can be with appropriate unsettling music. The action, while often static, was kept exciting which I imagine to be one of the biggest challenges of this piece. This is the second ‘Whitemore’ play I’ve seen and both have had the knack to suck me deep in to the story and journey of the characters which, ultimately, gives me, or indeed anyone, a remarkable theatrical experience. Erica Pickard as the Jackson’s teenage daughter, Julie, gave us a mature and more than able performance, she brought a good energy with her delivery, the developing relationship between Helen and Julie was sensitively played and Julie’s outburst in the final scene, when she realised the truth about the Krogers’ activities, was moving. A very intelligent and exciting performance from young Erica, she fitted right in and was equally as confidant and ever professional as the adult players. Stewart (Jonathan Black), the man in charge of the investigation had all the right qualities, mannerisms and intrigue to accompany his role, he does, however have the thankless task of remaining ‘professional’ and not allowing himself to make his performance more vibrant as the plot unfolds. A very neat performance, I empathise with people with these characters who must remain ‘reactless’! Di Boyer and Stephanie Peake gave good support as Thelma and Sally, their conversations with Barbara demonstrated the latter’s rising concern about the fact that while her friends were betraying their adopted country, she, in her turn, was betraying not only them but also her daughter. Sally, as short lived as her time on stage was, managed to gain the intended reactions and chuckles. Di Boyer was as sympathetic as her character would allow her to be, successfully holding back in displaying too much emotion or affection to Barbara while still managing to keep her character out of the ‘bland’ category – which is so often the case with characters such as these. Caroline Hickey is excellent as Barbara, all the lying has turned her into a nervous wreck which she executes superbly as she contemplates out loud ‘What is the difference between one lie or another’? Her character feels the brunt of the story as her world and home is turned upside down. Nick Sample gave us a soft and loving man of the house as Bob. His closing narration ‘turn’ was incredibly touching. Nick is a very easy and natural performer, he translates emotions and delivers with such quality as does Ros Greenwood (as Helen). Ros, an asset to any production, gave us a larger than life character ‘as Helen would be’ but, and most complimentary of all, was delivered to the perfect level, this part could so easily cross the line and be delivered too melodramatic but Ros gave the perfect balance, an expert of her craft who delivered a very fulfilling performance!

This interesting play certainly achieved its director’s ambition to provide a few talking points for its audience as we left the theatre. Congratulations to Alan Rothwell and his cast, and to The Garrick for setting the bar for my first play of the year!