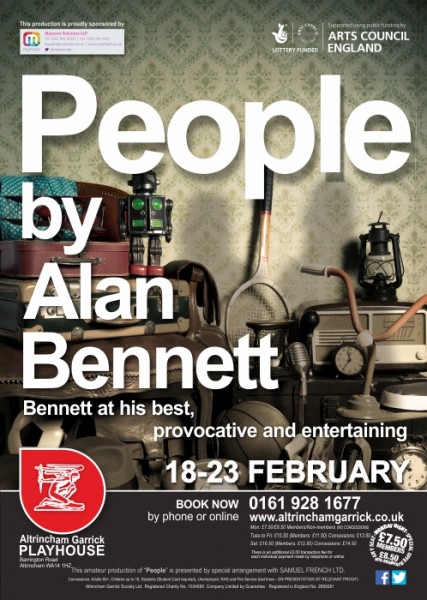 BENNETT AT HIS BEST, PROVOCATIVE AND ENTERTAINING

Alan Bennett make us question the way we as a country handle our heritage in this sparkling, thought provoking and very classy comedy. Dorothy and June Stacpoole live in a decaying stately home in south Yorkshire and the place has become nothing more than a financial millstone around their necks. The siblings are very different. Dorothy, a former model, pines for her former life of glamour and good times. June, on the other hand, is every inch the quintessential English clergywoman, with the stereotype even extending to her sensible skirt. June wants to sell the house to the National Trust, much to the disgust of Dorothy, who is outraged at the prospect of them and their home being turned into objects of curiosity, the type of curiosity usually reserved for museum pieces. As Dorothy and June, Celia Bonner and Melanie Davy are an unadulterated delight and there’s nothing to choose between them and real life sisters. Janet Slade may be a petite lady but when it comes to comedy roles she’s a huge talent and displays her considerable talents yet again as Dorothy’s “companion” Iris. In this role she’s an absolute hoot. When Dorothy meets an old flame they hatch a cunning plan to provide what she believes will save her and her sister having to sell their country pile. Now I won’t spoil things for anyone who hasn’t seen this play. But rest assured, this production is a high water mark for the Garrick and the dynamic young director Joseph Meighan. Once again, he and the Garrick have struck gold.

Review by Johanna Hassouna-Smith for Number 9

The Garrick’s season of plays seem to go from strength to strength with each of my visits and offers their audiences a wide variety of entertainment from musicals and pantomime, to Agatha Christie and classic plays. The audience is largely comprised of an aging population from the surrounding south Manchester suburbs to those who travel in from the Cheshire set and the selection of productions on offer are usually chosen to suit this demographic. This was the opening night of the show and it was a huge sell-out. Now I wouldn’t call myself a Bennett connoisseur, but I know he’s a classic British playwright and that his success is down to his imaginative creation of characters which epitomise the British; whether that be the class system, our values or just our downright old-fashioned obstinance as a nation. So, was the success of this production’s ticket sales down to Bennett’s reputation or was it the company’s prowess? I’d like to think it was both. However, it would be remiss of me not mention that this production carries a ‘not suitable for children’ warning before you enter the auditorium. Having ignored this notice as I wandered past it unwittingly, it came as quite a shock when, in the first 5 minutes, we were faced with a man wearing nothing but a cowboy hat. Needless to say that after this moment I was on board and so were the other cackling audience members, who had clearly done their homework before watching this hilarious series of events unfold! The play pokes fun at the Thatcherite English tradition of privatising the country’s assets, whether that be to the highest bidders, or under the ‘protection’ of the cultural backbone of Britain: the Church of England and the National Trust. The argument is embodied in the opinions of two sisters who own the stately home: Dorothy and June Stacpoole. Our eccentric heroine Dorothy, played by the incredibly talented Celia Bonner, wants to do anything to keep people out of the beautiful house and to just live in it with her equally eccentric ‘companion’, Iris (played by Janet Slade). Her sister June is climbing the ranks of the Church of England hierarchy and despite being the ‘Godly’ sister, epitomises all the money grabbing aspects of the church. With a hugely entertaining characterisation and brilliantly witty script, Celia Bonner makes everything around her shine with a flamboyant creation of Dorothy which is filled with naughty sassiness, yet a sense of pathos which really tugs on the heartstrings. The story is so cleverly written that Dorothy’s decision to hire out the house to a pornographic movie production rather than sell out completely to the National Trust, seems like a more morally justifiable solution to their financial issues. One of the things I love about the Garrick is that I often find myself pondering the question ‘Is this a professional or amateur production?’ What a great question to be asking when you know the answer is amateur! Their ability to recreate this level of professionalism must be commended on so many levels as there is a real team effort in every production and this one, directed by the talented Joseph Meighan was no exception. It is clear to see in the quality of the work that the director has not only had drama training but is incredibly creative as he doesn’t miss a beat with this high energy production of Bennett’s work. The entire cast deliver two hours of brilliance which doesn’t falter in entertainment with each and every one of them is deserving of a mention. The design of the production led by Lesley McKie is also a truly professional quality with a huge backdrop of a stately home complete with rotating changeovers. They really do reproduce quality which professionals would be proud of. Without wanting to give too much away, my favourite scene in the entire show was down to the lighting design, which evoked the contrasting environments of an English stately home with a film production, gleefully juxtaposed on stage at the same time. It was so clever and had the audience wincing in their seats as we watched a pornographic scene being filmed! Without a doubt, one of the most memorable moments of theatrical genius that I won’t forget for a long time and, judging from the howling audience, they won’t either!

Bennett’s ‘People’ delivers on every level: it is sharp, witty and poignant all in one go. I had such a great evening of entertainment and laughed until I almost cried. If you can grab yourself a ticket, you really ought to. Star rating ★★★★★

This amateur production of "People" is presented by special arrangement with SAMUEL FRENCH LTD.