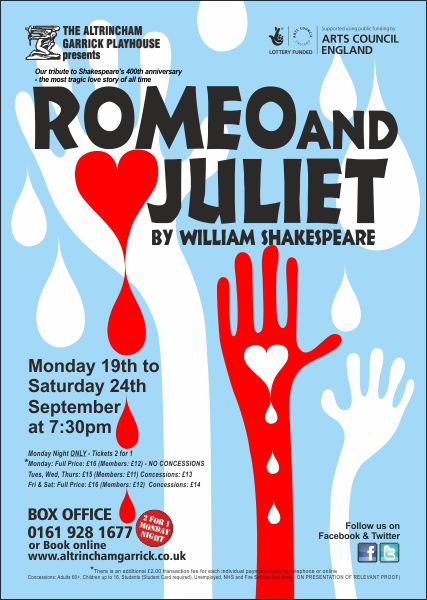 In a world of music, fame and money, Shakespeare’s classic play about love is brought to life in a brand new telling. The Montague and Capulet families are embroiled in a long-running feud and the hatred seems to be impossible to shift. When Romeo, a Montague, attends a Capulet ball in disguise, he falls in love with the beautiful Juliet, and she returns the love. A secret marriage takes place between the two young lovers, but happiness and harmony are not quite in reach as circumstances and fate continue to keep them apart. Perhaps one of the most famous plays of all time will be brought to the main stage in 2016, marking the 400th anniversary of Shakespeare’s death.

REVIEW by Julia Taylor for Altrincham and Sale Messenger

Romeo and Juliet production leaps to life at Altrincham Garrick I HAVE never seen a Shakespeare play move an audience so much as Joe Meighan’s production of Romeo and Juliet at Altrincham Garrick. Joe has used imagination to create a play that, while sticking to Shakespeare’s immortal words, uses modern dress, and a moral to make this play, presented 400 years after Shakespeare’s death, leap to life. Set at the millennium, the Montagues and Capulets run rival record companies. The striking feature is the fight scenes. We have a huge battle at the start which is nothing compared with the stag-like conflicts between Tybalt (Jackson Hayes) and Mercutio (Tom Oliver) who dies. In revenge, Romeo kills Tybalt in another violent fight. These fights are graphic, disturbing, full of anger and, at times, even clumsy but they are realistic. Added to this, the 23-year-old director has introduced music including a remarkable unaccompanied harmony. Juliet was originally 13 but Joe has realistically upped her age to 16. Rebecca Myers, who plays her, is only 17. She gives a passionate performance as she and 17-year-old Haroun Al Jeddal illustrate how life?s strongest emotion, love, can overcome body and mind. The part of Juliet’s nurse is interesting, made more so by Beverley Stuart-Cole. Deeply caring of Juliet, she adds ripples of humour. Mark Butt’s Friar Laurence is played well as a wise mediator. The surprise ending makes you realise that attitudes, unchanged since the sixteenth century, need changing. Star rating ★★★★★

DYNAMIC young director Joseph Meighan returns to the Trafford stage with a Romeo and Juliet for the Internet generation. But despair not – oldies like me certainly didn’t feel excluded from a production with a soundtrack of pop songs. If I have a criticism I think the opening fight scene was a little over done, descending into comedy by the end. This is, after all, a play about two rival. feuding families who hate the bones of each other. JM is a very promising talent and the fact that Romeo and Juliet are close to the age they’re meant to be gives the classic teen love story added authenticity. The two leads struggle to keep a lid on their emotions when Cupid’s arrow strikes. Haroun Al Jeddal’s Romeo is very much “one of the boys” and his performance is sure to strike a chord with the teenagers in the theatre – there were nearly 100 in the auditorium on Monday night – and those of us who can just about remember what it felt like to be young. With Rebecca Myers (Juliet) there are some memorable scenes to enjoy and the duo perfectly capture the awkwardness and emotional highs of young love. After seeing this production I really hope we see more of Geoff Holman on the Garrick stage for, as Juliet’s tyrant of a father Lord Capulet, he is outstanding. The scene in which he rips into his daughter is quite frightening, as she dares to go against his marital decree. Don’t be a stranger Geoff – you have a very strong stage presence. Any production that features Barry Purves as its designer is always something to write home about and he delivers yet again with a set that’s a positive visual treat. What the purists will make of this I don’t know and don’t really care as live theatre is forever evolving. It’s also a welcome return to Mark Butt whose Friar Laurence seems to have converted to Buddhism. Looking like he’s dropped off a 60’s album cover, Mark gives a very credible performance as a character full of eloquent authority – Star rating ★★★