Home» Show » Run for Your Wife 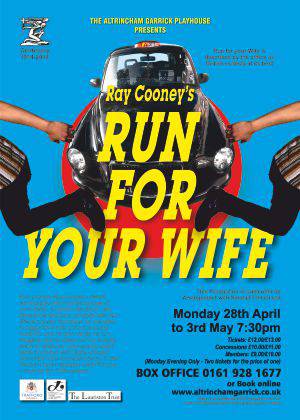 Run for your Wife is described by the critics as ‘British comedy at its best’. Ever popular, Ray Cooney’s award-winning play tells the hilarious tale of John Smith, a London cab driver, who literally has two lives, complete with two different wives! Somehow, he manages to juggle them both without arousing suspicion until he gets caught up in a mugging, and he wakes up in a hospital which is where his unscrupulous world starts to unravel and hilarity ensues ! One of the most successful farces in the Garrick’s back-catalogue made this play a must for the 100th season. Seen again, or for the first time it’s bound to be a hilarious night out.

Run for Your Wife, the Ray Cooney farce, is one of the best productions I’ve seen at the Garrick this centenary season.

It’s about a bigamist attempting to keep his two spouses apart. The miscreant, John Smith, a taxi driver, uses his shifts to alternate time with Mary in Wimbledon and Barbara in Streatham. What a mess Jonathan Black’s character gets into as, at an increasingly fast pace, he invents far-fetched lies to keep his secret. He’s a lucky fellow to have two such adoring wives. Beverley Stuart-Cole’s Mary and Ros Greenwood’s Barbara both enjoy some hanky panky. They react like lightening to unexplained happenings. Two other blokes add to the mayhem. One is Stanley, Mary’s unemployed neighbour. played with amusing bewilderment by Mike Shaw as he, too, gets caught up in the deception. The other is Barbara’s neighbour, the effeminate, Bobby, a camp Brian Howlett Brian delicately flicks his hair with his hand just like Mr Humphries in Are You Being Served! Two Detective Sergeants played by Andrew Higson and Brian Tickle also get entangled in the web. Without physically splitting the homes, Set Designer Stephen Bradshaw clarifies who lives where. The ending is happy though unexpected.This masterpiece, directed by professional actor Alan Rothwell, who also has a small part, follows the rules of farce to a tee. The teamwork is exceptional, the timing immaculate and, of course, it’s all played straight.

I was surprised to learn that this farce is relatively modern in comparison to others, the piece was written at such a turning point in society in terms of opinions which has resulted in this piece not ageing well which is a tremendous shame as (despite its un-PC views) it’s actually quite a good one! Director, Alan Rothwell quite rightly mentions in his directors note that a lot of actors look down on farces as being down-market, but ‘Run for your Wife’ is certainly a hidden gem, though I can see why it doesn’t often get an airing with its dated camp humour and offensive views on same sex relations and transvestites etc. The times when people used a limp wrist and popped knee to symbolise someone is ‘that way!’  quite cringe worthy for a modern theatre goer. It’s also not so easy to update the play with mobile phone technology making it easy to communicate with people out and about, the play (unless completely re-worked) wouldn’t believably translate to modern times. Ray Cooney (writer) has indeed updated this play as a screenplay (under the same title) which starred Danny Dyer and Denise Van Outen in 2013, this was an attempt to rework it and place it in modern times though, unfortunately, critics still slammed it as being 30 years out of date. The opening ‘mime’ with the two wife’s (Beverley Stuart-Cole & Ros Greenwood) anxiously waiting for their husband (Jonathan Black), who is late home, set the scene beautifully – this, followed by the first two pages of dialogue between the two wife’s was comic farce writing at its best – magic! The casting was ‘obvious’ and I felt it was a little on the safe side, however – no question about it – we had a fine selection of skill on display with a cast more than capable, each of them delivered their parts as they should be and as required. The the real comic turn of the piece for me is Mike Shaw as Stanley, the well-meaning attempts to help only lead to even more misunderstandings which resulted with the biggest laughs, my personal favourite being when the detective asks; ‘Do you know what an accessory is’? to which he replies ‘Handbag!’?’Run For Your Wife’ may be a dated play but the mix-up comedy format works very well today in the hands of this talented cast and crew.