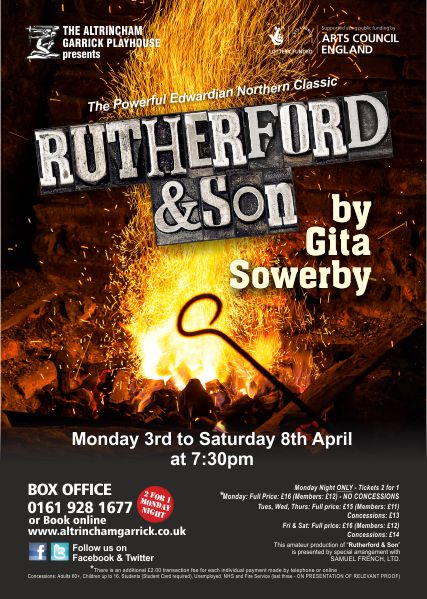 Show Dates
-
By: Githa Sowerby
Directed By: John Cunningham
This amateur production of 'Rutherford and Son' is presented by special arrangement with SAMUEL FRENCH, LTD.

The play takes place in an industrial town in the north of England, a few years before the First World War. Mr. Rutherford is a widower, but his house is far from empty: also living there are his spinster sister and his three grown children, Janet, John and Richard, along with John’s wife and their new baby. Rutherford owns a glass factory which was founded by his father, and which is one of the largest businesses in the town. The house has an oppressive atmosphere to it, partly because of the winter settling in, but more because of the fear that Rutherford inspires in his family. The business has gone through tough times recently  he has had to take out a large loan from the bank and only someone with Rutherford’s single-minded determination could have persevered as he has. In the face of the dominance that Rutherford wields over his family (no less than his factory), Janet has turned sullen and the two sons have become passive and ineffectual. But all three have hopes for the future. The play comes to a climax when he is confronted by a family mutiny which threatens to destroy the family as well as the factory.

Powerful scenes and fine displays in Rutherford and Son

This week, The Garrick presents Rutherford and Son, a play first seen in 1912 and, unusually for the times, written by a woman, Gita Sowerby. One wonders if it is a little slow moving and long for modern audiences ? the second half in itself lasts an hour and a half ? yet it reflects human nature well. The strained atmosphere in the Rutherford household is captured from the start in the gloomy home where industrialist Rutherford lives with his adult family. You can feel the pent up resentment for their tyrannical father whose only love is his glass making factory which he plans to leave to at least one of them, though none are interested. From his first grand entrance, Rutherford, played by a charismatic Richard Sails, dominates his family. He has educated them well but has never considered its effect upon them. One by one he lights the blue touch paper as each of his children explode verbally. There are powerful scenes when he confronts them. Richard, John and Janet played by Scott Ransome, John Keen and Ali Davenport give fine displays of acting as their true feelings for their father emerge. Outstanding performances also come from Mags Johnston as the grumpy aunt and David Baxendale as faithful factory manager, Martin. Parissa Zamanpour, who plays daughter-in-law, Mary, becomes the only one who can handle Rutherford and her efforts lead to the unusual ending. Star rating ★★★

IMAGINE if you can, life as a sloth and that’ll give you the idea of the pace of act one. Thankfully, this old school “right northern” play about a well-off family led by a factory owner splutters into life by act two. But the only way is up, to quote a line from a certain pop song. In act two we’re treated to some memorable, at times impassioned confrontations between Rutherford, the patriarch from hell, and his two sons. John dreams of bettering himself for the sake of his infant son, while Richard is a man of the cloth, whose career aspirations are met with indifference by his indifferent dad, a man who eats, sleeps and breathes business. Richard Sails (Rutherford), John Keen (John) and Scott Ransome (Richard) play these scenes with the perfect amount of heat. However, the play’s most sympathetic characters are Martin, who has served his master man and boy and Rutherford’s feisty daughter Janet, a likeable 30 something terrified of being left on the shelf. David Baxendale and Ali Davenport make sure there’s no escaping their anguish when they’re so unjustly treated. I imagine this 100 year old was considered quite daring when it was first performed, as Rutherford’s most worthy adversary comes from an unexpected source. But this play feels its age and I left the theatre wondering what a cast and a director as talented as these could have done with a play that has something to say to a 21st century audience. Star rating ★★★