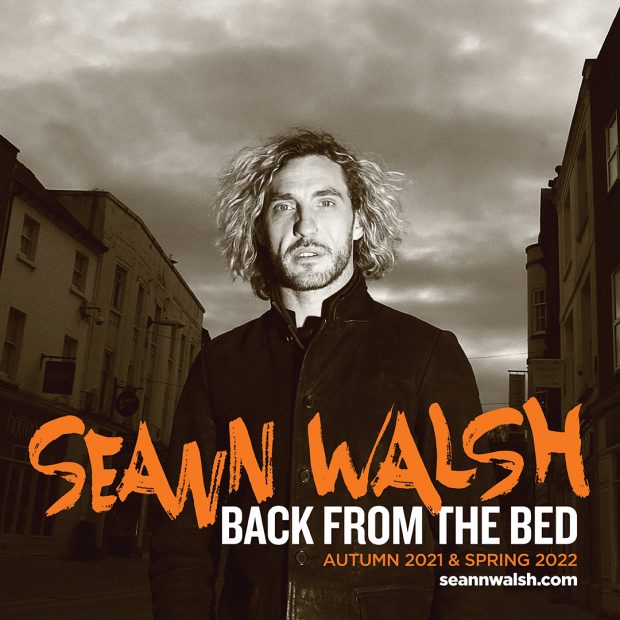 OFF THE KERB PRODUCTIONS PRESENTS

Seann Walsh: Back from the Bed (formerly Same Again?)

Hello, Seann here. Did you know that the comedians have to write their own blurb? I find that absolutely insane. What am I meant to say? “I’m fantastic, come and look at me talk”? I don’t know. It’s me. I do stand-up.

I guess I can start with the fact I renamed the tour. Sticking with ‘Same Again?’ felt a bit triggering after the year we’ve had. So it is now called Back from the Bed. Some of the material will be the same as I had always planned and some of it will be new because it will be difficult to avoid mentioning the last year in which millions of decent people tragically lost their lives to TikTok.

The previous leg of this tour got a lot of standing ovations, which was pleasing. Either that or they were leaving early. Come along if you like me. I’d be confident enough to say come along if you’re on the fence. Cheers. Here are some things I’ve been on…

Seann has starred in series 1-3 of The Stand Up Sketch Show (ITV2), Netflix’s Flinch, Live At The Apollo (BBC2), Tonight at The London Palladium (ITV), Celebrity Juice (ITV2), Play To The Whistle (ITV), a team captain for Virtually Famous (C4), 8 Out of 10 Cats (C4), Alan Carr’s Chatty Man (C4), Hey Tracey! (ITV2), Comedians Solve World Problems (Comedy Central) and has made regular appearances on The Jonathan Ross Show. He appeared in Dave Channel’s Campaign Against Living Miserably and is an ambassador for the CALM charity. He also hosts podcast What’s Upset You Now? alongside Paul McAffrey.

‘Unquestionably the best observational comic of his generation’ – The Guardian

‘…an absolute tour de force’ Beyond The Joke

‘A cracking good show’ – The Telegraph

‘He remains one of the most entertaining observational comics on the block’ ; – The Independent

AGE GUIDEANCE – STRICTLY 14+ (Likely to be swearing and adult content)