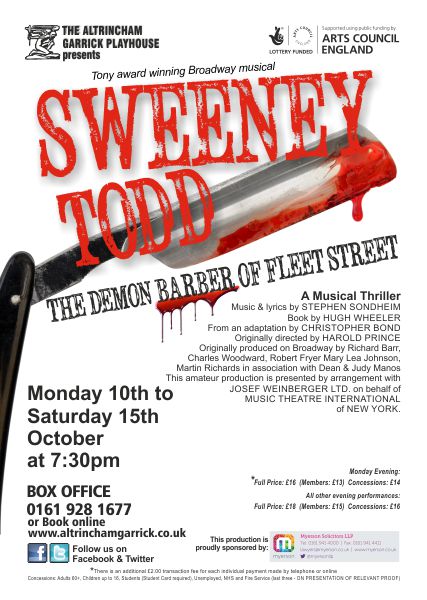 One of the darkest musicals ever written, Sweeney Todd: A Musical Thriller is the unsettling tale of a barber who returns home to London after fifteen years of exile to take revenge on the corrupt judge who ruined his life. When revenge eludes him, Sweeney swears vengeance on the entire human race, murdering as many people as he can, while his business associate Mrs. Lovett bakes the bodies into meat pies and sells them to the unsuspecting public. Perhaps composer/lyricist Stephen Sondheim’s most perfect score, Sweeney Todd is lush, operatic, and full of soaring beauty, pitch-black comedy and stunning terror. It’s one of the signal achievements of the American musical theatre of the last fifty years, and it’s the high water mark of Sondheim’s six remarkable collaborations with director Harold Prince.

The production was proudly sponsored by Myerson Solicitors

REVIEW by Rick Bowen for Stagestruck

THE two leads in this fabulous musical certainly come up with a business plan with a difference and as distasteful as it is, the audience can’t help laughing, albeit uncomfortably at times. It’s impossible not to have a giggle, to be seduced by the show’s jet black humour. How sad then, that a production of this quality played to a half empty theatre on Monday night. Frustrating for all concerned, particularly for former executive producer Paul Kerrryson who makes a welcome return to direct with distinction Sondheim’s macabre masterpiece. They should re-christen Kerryson Mr Musicals, for it’s a theatrical genre in which he consistently excels. Musicals live or die by their leads and in Wayne Holt and Laura Chandler, who play Todd and pie shop owner Mrs Loveitt respectively, the Garrick have a dream duo. Wayne gives the audience the creeps even when exchanging pleasantries with his customers and the “demon barber” is a truly imposing and intimidating figure. The scene I particularly enjoyed is the one in which Mrs L tries to bring out the romantic in the vengeful Todd. Holt and Chandler play this to perfection and for me, this is Laura’s finest hour on the Garrick stage. She’s a real credit to her late dad Terry, whose acting gave me decades of pleasure at this particular playhouse. If you aren’t a convert, it may take time to warm to Sondheim’s genius, as the music can be difficult, the lyrical wordplay intricate. Once converted, there’s no going back and singers like Chris Wagstaff, who plays the lovesick Anthony, and Sara Grace Nelson, who plays the apple of his eye, Joanna, are sure to boost the legion of Sondheim fans. On stage they are mesmerising, and Sara Grace has a voice so pure it’s sure to set many a bottom lip quivering. It did mine.

A major musical triumph, that simply must not be missed. Magnificent. Star rating ★★★★★

REVIEW by Julia Taylor for Sale and Altrincham Messenger

Gruesome murders as the Garrick delivers another five star production

NEVER has murder been more gruesome than in the Garrick’s musical, Sweeney Todd, the Demon Barber of Fleet Street. To use a pun, the cast make mincemeat of Sondheim’s difficult, strident music and the professional direction of Paul Kerryson, ensures the playhouse maintains its reputation for good musicals. Sweeney Todd, played forcefully by Wayne Holt, really is a demon. He’s a menacing presence but can win you over with his deep baritone voice. Let him shave you at your peril for you will end up travelling dead down a brilliantly contrived shute, to the baker’s shop below. You’ll become the main ingredient of one of the comical Mrs Lovett’s delicious pies. When Laura Chandler sings The Worst Pies in London, it adds spice to her concoctions. A third employee is kitchen assistant, Tobias Ragg. Joseph Dillon, 16, who has a lovely voice, plays him as naive and almost driven mad by what he sees in the business-like death factory around him. The murdering starts because Sweeney wants to avenge Paul Wilson’s unfeeling and lecherous Judge Turpin who wrongfully exiled him. Worse still, Turpin?s the guardian of Joanna, Sweeney’s daughter. It is Sara Grace Nelson who, as Joanna, sings one of the show’s most beautiful songs, Green Finch and Linnett Bird. The Mark Goggins orchestra are good but, occasionally, overpower the singers. Despite this, it’s another five star production for the Garrick. Star rating ★★★★★

Composer and lyricist Stephen Sondheim is very difficult to ‘get in to’; he doesn’t make it easy for either the listener or the singer; but if it’s right it is extremely rewarding and a total joy. Sweeney Todd is one of the more difficult Sondheim scores, and therefore potentially one of the most rewarding too; and has become, since the recent film, one of his better known Musicals too. It tells the gruesome and dark story of Benjamin Barker, a barber who was transported for life simply because he opposed a local Judge deciding to have his wicked way with his beautiful young wife, Lucy. Unbeknownst to Barker, Lucy falls pregnant and the child, christened Joanna is brought up by the Judge as his ward. 15 years pass since Benjamin Barker set foot in London but now arrives back with his First Mate, Anthony, and as he revisits the barber’s shop he used to own, a plot hatches to wreak revenge on the Judge, and so under the assumed name of Sweeney Todd, enlists the help of Pie Shop owner, Mrs. Lovett, (or is it she who enlists him to give her business a boost….) and the rest, as they say, is history! Altrincham Garrick brought this bloodthirsty legend to life assembling a ‘dream team’ of Paul Kerryson and Mark Goggins. Former Artistic Director of Altrincham’s Garrick, Kerryson made a welcome return to direct what he does best, Musicals. Whilst Mark Goggins’ strict and firm baton waving ensured that musically everything was completely sound. Wayne Holt gave a very dour and unsmiling interpretation of Todd, even in the lighter scenes (A Little Priest/By The Sea) he was still very broody and ‘dangerous’. Not the conventional interpretation, but it certainly worked for him and his deep baritone voice and strong stance worked very much in his favour. Mrs. Lovett (Laura Chandler) and Beggar Woman (Charlie Welsh) were both excellent too, but both were sadly too young for these roles in comparison with Todd. Chris Wagstaff gave a plaintive and stolid performance as love-sick Anthony, and the object of his desires, Joanna was Sara Grace Nelson, who had the sweetest high soprano register I think I have ever heard. The stand out performance for me though was undoubtedly Joseph Dillon, who aged only 16, {and reminding me of myself when I was his age a little too!}, gave a wonderful performance as Tobias Ragg. With a strong supporting cast and even stronger chorus, this makes for a rather macabre but highly entertaining evening out. The show runs a little long, coming down at 10:20pm, but stick with it; Sondheim needs to be listened carefully to, otherwise you will miss many of the oh so clever lyrics and in this production Goggins has taken the songs just a tad slower to accommodate for this. It’s worth it! It has been quite a while since Manchester has been treated to Sweeney Todd’s cold-blooded throat slitting, and it may well be a long time before the next; So catch it while you have the chance, by seeing it performed by one of Greater Manchester’s premier amateur theatre companies.


This amateur production is presented by arrangement with JOSEF WEINBERGER LTD. on behalf of MUSIC THEATRE INTERNATIONAL of NEW YORK.