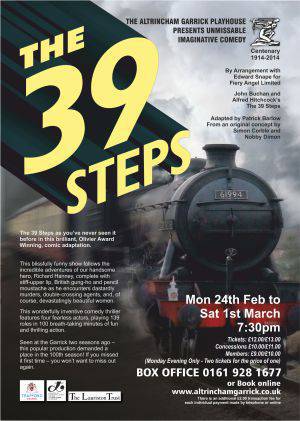 The 39 Steps as you’ve never seen it before in this brilliant, Olivier Award Winning, comic adaptation. This blissfully funny show follows the incredible adventures of our handsome hero, Richard Hanney, complete with stiff-upper lip, British gung-ho and pencil moustache as he encounters dastardly murders, double-crossing agents, and, of course, devastatingly beautiful women. This wonderfully inventive comedy thriller features four fearless actors, playing 139 roles in 100 breath-taking minutes of fun and thrilling action.
Seen at the Garrick two seasons ago this popular production demanded a place in the 100th season! If you missed it first time you won’t want to miss out again.

‘Saw ‘the 39 steps’ on Monday with friends …. It was my first visit to the Garrick Playhouse & I was hugely impressed by the venue, organisation, play, and especially to the 4 actors involved. Great entertainment, visuals, energy levels, use of humour & involvement with the audience, all those involved should be immensely proud. ?Thanks for a great night.

‘Saw it last night – absolutely the funniest play I’ve ever seen – well done to all the actors and backstage staff!!’

‘Just saw The 39 Steps at @AltrinchamG. My cheeks ache from laughing so hard! It’s brilliant!!’

“Such a fantastic evening tonight, this to me… Along with Fur Coat And No Knickers was the funniest show I’ve ever seen, all four actors were amazing and so talented, what a performance! Once again brilliant night, cannot wait for the next show”

‘Tears rolling down my face at @AltrinchamG Go and see ” The 39 Steps” – a brilliantly comic take on a Hollywood thriller. Pure quality!’

and actually sent to us DURING the interval!…

@AltrinchamG It is hilarious! Well done to all involved. Really enjoying it 😉

Finally from one of the members of the cast…

“And so it ends. Sadly our short rerun of The 39 Steps has ended. If you missed it then I suspect that all the team will happily repeat it again soon. Thanks to an amazing crew, director and cast.”

The 39 Steps – the Best Production in Years

It’s only two years since the Garrick presented The 39 Steps. By popular demand, and with the original cast, they’re repeating it in their centenary season. John Buchan’s novel about dastardly murders, double-crossing agents and beautiful women, seen in an Alfred Hitchcock film, is adapted for stage by Patrick Barlow. The play is, again, directed by Andrew Close, who makes this the best Garrick production for years. This time, the script even includes the names of all 53 Hitchcock films! Our hero, Sean Duvall, is a moustached and Brylcreemed Richard Hannay, who heads for the Highlands to avoid arrest. His funniest scene is when, in handcuffs. he makes a satirical political speech. With unstoppable energy and a stiff upper lip, he runs around at a furious pace. Barry Spencer and Scott Ransome move even faster. Between them they play 153 characters, quickly changing both outfits and facial expressions, becoming both sexes, goodies and baddies, speaking with Scottish accents, and using exaggerated body language and mime. You feel exhausted just watching their breathtaking skill especially when they play four characters at once! Stephanie Niland is the femme fatale who draws Hannay into her web. She also plays two other women and obviously enjoys roles more suited to a James Bond film. She?s a talented actress who understands the play’s comic cut nature.

Remotegoat Review of The 39 Steps by Julia Taylor

It’s only two years since the Garrick presented The 39 Steps. By popular demand, and with the original cast, they are repeating it in their centenary season. John Buchan’s novel about dastardly murders, double-crossing agents and beautiful women, used in a film version by Alfred Hitchcock, is adapted for stage by Patrick Barlow. The play is again directed by Andrew Close who, last time, stepped in at short notice. He ensures the correct frenetic pace in one of the best productions I’ve seen in a long time. Our hero is Sean Duvall, a moustached and Brylcreemed Richard Hannay who flees London for the Highlands to escape arrest. I love his energy and the lip which remains stiff as he races from place to place at a furious pace. The timing is even faster for Barry Spencer and Scott Ransome. Between them they play 153 parts, popping up all over the place wearing different outfits and wigs, speaking with pronounced Scottish accents, and using exaggerated body language. You feel exhausted just watching them especially when they play four characters at once!  The play illustrates three modes of transport in an innovative way. The first is a model plane on a fishing rod which emulates the real thing. It crashes and is replaced by two miniature parachutes. Then comes the steam train, largely shown by mime, and, finally, a car consisting of four chairs and a lectern. All good fun. Stephanie Niland is the femme fatale who draws Hannay into her web. She also effectively plays two other women and obviously enjoys roles more suited to a James Bond film. The small cast give their all but, on this occasion, I should mention John Newton in charge of props. Without his expertise in providing guns and other vital equipment at breakneck speed, the expertise of the cast would be wasted.

If you saw it before, come again. It?s even better this time. Star Rating ★★★★★

This is a frivolously hilarious and terribly British upper class farce with an intelligent wit encountering murder, secret agents and pretty ladies set to a backdrop of the 1930’s. Based on John Buchan’s novel and the highly regarded Hitchcock film version, ‘The 39 Steps’ is adapted by Patrick Barlow and performed by a stellar cast of just four. My favourite aspect of this production is how it’s hinted as though the actors play actors who’re in a slightly feeble production of ‘The 39 Steps’ – The apologetic asides to the audience which say ‘Yep, can you believe we’ve ‘really’ been told to do’ this!’? and the embarrassment on the players faces when an actor is perhaps overdosing on ‘ham’ were all touches of genius! Director, Andrew Close, has worked wonders on this production. I very much appreciated his own inclusions put into the piece, particularly how he’d (just for fun) introduced as many Hitchcock titles into the text which added even more chuckles, some of which were quite ingenious, my personal favourite being ‘Mr & Mrs Waltzes from Vienna! particularly after wondering How will they manage to sneak that one in!? This production is silly in the very best sense of the word causing many involuntary chuckles, snorts and giggles – but for some reason this play really does work as a terrific piece of theatre with its stiff-upper-lip manner, the not so staggering special effects which are greatly shameless yet creative, not forgetting the false over acting and prop / set chaos all adding to the endless fun and havoc! The duo of ‘clowns’ provide masses of characterisations aptly presented by Scott Ransome and Barry Spencer who both appeared to be in their element with this production, they instantly set the tone and kept the show moving installing its pace with their quick-fire changes and tight verbal tennis skills making this pair a very impressive turn. Stephanie Niland smoulders as the femme fatale in each scene, excellently providing a cascade of short lived characters after her impromptu early death she brought glamour and romance to the show with bursts of film noir and Hollywood 1930’s lushness. Sean Duvall suitably portrays the man on the run; Richard Hannay, the only constant in the ever changing world of variables. His charm and charisma holds the audience?s attention throughout while he juggles the tone of the play perfectly, wonderfully done! The visuals are central to the hilarity. Every set change, effected by the cast (regardless of how unwilling they may be), is turned into an event, from a hilarious sequence with a movable lamppost to endless window and door manoeuvres all engages the audience deeper into the whirlwind and magic! Although this production does have countless strong advances in its favour I do feel I need to mention the show ran quite long (coming down at 10:30pm) and technically, on occasion, players were performing out of light but – no qualms about it, this spoofy spy thriller made a jolly good evening of theatrical tomfoolery entertainment!
Congratulations Altrincham Garrick!