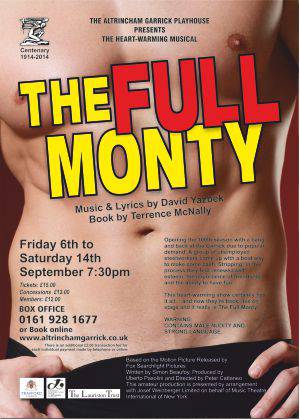 Opening the 100th season with a bang and back at the Garrick due to popular demand, this award winning musical by Terrence McNally and David Yazbek transports us to Buffalo, New York, where a group of unemployed steelworkers come up with a bold way to make some cash. Stripping! In the process they find renewed self-esteem, the importance of friendship and the ability to have fun.

This heart-warming show certainly has it all… and now they’re back, live on stage and it really is The Full Monty!

Make sure you book your tickets early!

Review of The Full Monty  by Julia Taylor for remotegoat.com

After Calendar Girls last season, the Garrick has started their centenary season by giving the boys a chance to be altogether in the altogether. Yet The Full Monty isn’t a question of ogling at men’s bodies but a poignant story about the reaction of six men made redundant by their local steelworks. This time, however, the steelworks are in Buffalo, New York and the accents are (acceptably good) American. It’s also a musical by David Yazbek based on Terrence McNally’s book. One especially lovely song is You Rule My World performed by Dave and Harold whilst their wives are asleep. The central character, is Jerry Lukowski played by Michael Daws. He sings many songs beautifully. Behind with his alimony payments, he must get them up to date in order to keep seeing his son, Nathan, (a delightful Ben Hanley) It is his idea to strip like the Chippendales, to raise money. He teams up with chubby Dave Bukatinsky (Simon Pickup) who is not exactly a stunner but eventually overcomes his fear of stripping. Another ex-worker, Harold Nichols, gets into debt because he is too ashamed to tell the news to his snooty wife. David Leathlean convinces us that Harold is on a hiding to nothing and that honesty is always the best policy. Harold is an experienced dancer who teaches his mates how to move. Then there is dumb security guard, Malcolm MacGregor (David Jones) dominated by his mother. He is depressed to the point of suicide until persuaded to join them. They recruit two others. One is the older, arthritic, Horse. Winston Robinson. Robinson tells us in song why how he got that nickname. The other, the well endowed Ethan Girard (Robert Watson). I am especially impressed by the performance of Winston Robinson. As well as singing ‘Big Black Man’ with panache he brings the house down as he defies arthritis to dance. Praise should also go to Jon White, who as a professional stripper gives us a taste of what is to come at the very start. The women excel, too, especially when they sing It?s a Woman?s World led by Laura Chandler[s Georgie. Vicki Stott as Vicki Nicholls sings like a professional and Mandy White does well as Jerry[s ex-wife. As the blokes[ accompanist Ann Chandler adds spice to the men’s rehearsals. This musical is not just about titillating ladies but gives insight into the consequences of losing a job. It shows that, whilst money is important, the camaraderie of colleagues is equally special. The climax comes at the end when we see them actually perform their show, Hot Metal. A word of warning! Don’t sit on the front row. You might be overwhelmed!

Off off off – the cast on stage

It’s Altrincham Garrick’s centenary season – and what a way to get the party started. The production of the musical The Full Monty reminds us, if we needed reminding, just how talented and versatile this theatre company is. Inspired by the British movie of the same name, it has a challenging score that would stretch the vocal talents of the professionals but this society thrives on challenges are more than meets the ones posed here. South Yorkshire has been swapped for the States in this feel good show which, apart from the setting, stays true to the spirit of the original big screen tale. A group of unemployed steelworkers strip off to boost their bank balance in a musical that is as much about friendship and the strength of the human spirit as it is about blokes who aren’t exactly beefcakes losing their inhibitions and, ultimatelly, all their clothes. Director Steph Niland and her production team have nurtured great performances from the cast who evidently love ever second of their time on stage. I particularly liked Michael Daws as Jerry Lukowski, a decent, divorced dad struggling to pay his maintenance and Simon Pickup as Dave Bukatinski, a man who has lost his ability to make love to his wife as well as his job. David Leathlean is very, very likeable as the up tight but eminently likeable Harold Nichols. Great fun and not deserving of the small house it had on opening night. Star Rating ★★★★

Everyone either, at least knows the 90’s film of the same name starring Robert Carlyle or if not, will be familiar with its soundtrack of Donna Summers ‘Hot Stuff’, Hot Chocolates ‘You Sexy Thang!’ & Tom Jones’ ‘You Can Keep Your Hat On’. For those fans of the film who loved the British grit and wit along with its thriving soundtrack of 70’s disco classics will probably feel let-down with the musical adaptation. First off, the setting has been uprooted from Sheffield (Yorkshire) to Buffalo (New York) as well as being given a raft of original songs, still with a funky score, but no Donna Summer here! Would the famous craze of the Juke Box musical (using the films thriving soundtrack) have been a better recipe for this show? If I’m honest, I’m on the fence! Don’t get me wrong, this musical adaptation of the film does work incredibly well as a modern musical which focuses, like the film, on the lives and trials of a bunch of unemployed ex-steelworkers out to make a few quid (sorry! ‘bucks!’) Michael Daws as ‘Jerry’ exceeded my pre-conceived expectations. I’ve seen Mike in a few roles now and (as I’m always honest) really didn’t think that this one would have suited him too well but fair play, he gave a convincing portrayal as a resilient guy, loving / pally-like father and driving force behind the ‘stripping troupe’ concept and did a creditable job! Standouts amongst the cast were Simon Pickup as ‘Dave’ who translated the insecurities of this depressed character with sincerity while still savouring in the comedic traits, Vicki Stott as ‘Vicky’ commands her few scenes leaving a very memorable interpretation. Laura Chandler as ‘Georgie’ sang well, especially in the fine duet with Vicki ‘You Rule My World’ Reprise which, I’d say, was my magic moment in this production! Winstan Robinson was a splendid ‘Horse’, especially in his audition scene, while Robert Watson , David Leathlean & David Jones skilfully completed the ad hoc strippers that are; ‘Hot Metal’. Mention must also be made to Ben Hanley, as a very competent Nathan (Jerry’s son) the youngest cast member by a fair distance. So? typically, I attended on the SFX hiccup night which, unfortunately, we’ve probably all had to experience at one time or another. I cannot deny that the failure with the microphones did slightly hinder this particular viewing as we missed a lot of the dialogue (particularly when underscored) and it was difficult to tune in to the singing from multiple performers at any one time as some mics were up high, some weren’t on at all while others were somewhere in between. By act 2, it was unquestionably less shaky, but none the less, I felt the frustration for the cast and production team. Credit where it’s due, the cast did a commendable job by refusing to allow any tech glitches to hinder the level and quality of their performances and delivery. Director, Steph Niland, kept the show slick and the scene changes passed without a notice and without a crew member in sight. Her vision was, as I expected, her own stamp which I always admire. I also appreciate that she’s had a tough act to follow stepping into the role of Director for this show and I have no uncertainties that she’s done the Garrick proud. The biggest applaud from me was the dark and urban ambiance she’d kept lingering throughout the show, I liked the angular, rusted steel effect of the set and loved the idea of the final strip outfits being the steelworkers uniform. Despite the sound issues during this performance, I must also give my congratulations to the sound team as the band, for the first time, didn’t feel as though they were a recording like they have done in the past. Although the band was still being channelled through from the studio as per, I felt the experience of a live band in the auditorium which I was thrilled with and have longed-for. Terrific job!

The Garrick deserve hearty congratulations for this seasons kick off production which was directed with potency and supported by accomplished choreographer, Laura Chandler – and with efficient musical direction from Mark Goggins. A dream team’ in their own right.

The Full Monty gets the American touch at the Garrick

INITIALLY my heart sank when I heard the Americans had turned The Full Monty into a musical.

Surely this warmly funny and at times touching story about a group of unemployed Sheffield steelworkers was as British as fish and chips, warm beer and conversations with complete strangers about our crazy climate. Having seen the musical I have to say it won me over and, like Steph Niland who is directing the US version for Altrincham Garrick, believe it travels well across ‘the pond’. She said: ‘The film tapped into that international love of showing the fight to succeed against the odds and the underdog as a winner. Yes the script has been tampered with, the typical British slang words, products and some character names have been altered but essentially the story works in any culture. It’s about the relationships and the struggles.’ The story of men out of work, broken homes, bruised egos and having strength, courage and humour in the face of adversity will stand the test of time and translate into any culture, especially in this changeable era and unsettled international economic climate. The Full Monty is the story of a group of down on their luck steelworkers who turn to stripping to make some money. A likeable bunch, they’re all ages, shapes and sizes, which is a source of great amusement.