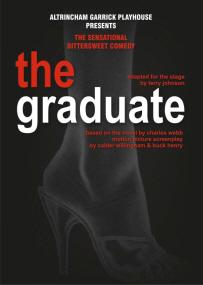 The play was a sensation in London’s West End and on Broadway. A cult novel, a classic film, a quintessential hit of the 60’s. It is now time to be seduced by the graduate all over again. Based on the novel by Charles Webb and the motion picture screenplay by Calder Willingham and Buck Henry, the play has been adapted for stage by multi award winning author and director Terry Johnson. Benjamin has excellent grades, very proud parents and, since he helped Mrs Robinson with her zipper, a fine future behind him.

NUDITY is becoming a habit with Altrincham Garrick. Its first show of the season ‘The Full Monty’ displayed the male full frontal variety and in this week’s production, The Graduate, the, shall we call it, half frontal female version. Although genuine, both revelations are, in a sense, illusory. Blinding white light blanked out the Full Monty version. Likewise, dim lighting partly hides the exposure of the seductive Mrs Robinson in The Graduate Based on Charles Webb;s novel, the role of Mrs Robinson was made famous by Anne Bancroft in Mike Nichols? 1967 film version and, in the subsequent stage version, by Kathleen Turner and then Jerry Hall, Mick Jagger’s ex. Jerry played to full houses for six months though one wonders whether the audience were more interested in her body than her acting ability! She was later followed by Amanda Donahoe, Anne Archer and Linda Gray of Dallas fame. What leads to all this nakedness? Basically, it?s because Mrs Robinson, the wife of his father’s business partner seduces a dilatory student after his homecoming party. The student, Benjamin Braddock, is a perplexed 21-year-old who resents the wealth-acquisition of his affluent parents. To add to the puzzle, Ben falls for Mrs Robinson?s daughter, Elaine. Well-known Garrick performer, Beverley Stuart-Cole brings swathes of sensuality to the role of Mrs Robinson. Here is a woman who must not be ignored, a woman of the world with an unfulfilled appetite for sex. She is all fur coat and no knickers, a cool, world weary bitch. You can?t ignore Mrs Robinson especially in Beverley’s hands. And what of the hapless Benjamin – Phil Duncan (22), making his debut at the Garrick, portrays a young man who doesn’t know what he wants of life though he does know that he wants Elaine. Both Phil and Sinead Parker who plays Elaine spell out their characters well and you can sense very clearly their mutual attraction and youthful uncertainty. I wondered how the Garrick would tackle the scene where Benjamin stands at the bottom of the family pool wearing a scuba outfit in order to find time for his hobby, thinking. The answer is simple. He doesn’t get as far as the pool but tries on the comical outfit in his bedroom. Another good scene was where Mrs Robinson and her daughter become impossibly drunk and Mrs R teaches naive Elaine how to cope with the effects. Bryn Thomas’s production is a remarkable example of how scenery can be used to good effect. Set designer Barry Fletcher’s use of a revolving stage enables the audience to follow the action in ten different settings. The play is almost as effective as the movie when it comes to locations. Another backroom boy, Mike North also deserves praise for his pastel lighting and subtle sound effects. In the words of the background song ‘Mrs Robinson’ I can only add ‘Here’s to you Mrs Robinson’, for ‘The Graduate’ is full of humour presented in a professional way. Star Rating ★★★★★