Home» Show » The Importance of Being Earnest 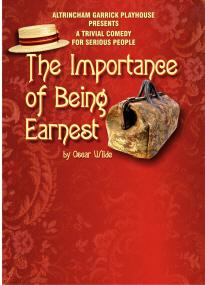 This classic comedy of manners is the story of two couples struggle to find love in a conflict of deception and false identities. Jack takes on the identity of Ernest to capture the heart of Gwendolyn. Algernon becomes Ernest because he is in love with Cecily. Through a series of hilarious situations the characters all learn the importance of being earnest with each other.

One of the most famous lines in the history of British theatre consists of just two words – “a handbag!” They are spoken in Oscar Wilde’s comedy, ‘The Importance of Being Earnest’ at the Garrick this week. You can often judge the quality of a play by the way these words are spoken. They are uttered when Lady Bracknell discovers that her prospective son-in-law, Jack, was found as a baby in a handbag at a railway station. The words first became famous when Dame Edith Evans spoke them in the 1952 film. In this version, Alison Davis’s booming, throaty, upper-class voice make her the ideal person for the overpowering part. She gets the intonation of those two words right even though they are nothing like Dame Edith’s. The rest of the cast successfully capture the style and feel of the upper-class in-crowd who are constantly trying to be other people instead of being true to themselves. The play is so full of charm that it doesn’t really matter that it has a flimsy plot and light weight characters. The storyline hangs on a thread. Jack becomes Ernest to capture the heart of Gwendolyn and Algernon also becomes Ernest because of his love for Cecily. The dialogue is pure, late nineteenth century banter full of irresistible one liners. I am so glad director, Barry Purves sticks to Wilde’s script as used at the premier at the St. James Theatre, London, in 1895. I have seen versions of this play where it has been updated and, as a consequence, completely ruined. Phil Duncan is an ever so far back Algernon Moncrieff. His switch to becoming Ernest, the imaginary brother of Jack Worthing, (the one found in the handbag) is doubly amusing. Jack becomes the pivot around whom everyone else revolves thanks to a sterling performance by John Keen. Paula Keen and Sinead Parker as Gwendolen Fairfax and Cecily Cardew sail through the amusingly indignant repartee that results when they mistakenly believe they are both engaged to the same man (naturally called Ernest!). There is even a fracas with a knife – if only a cake knife! Thanks not just to the cast but to the costume department, the Garrick successfully capture frivolity, snobbishness and humour amid the cucumber sandwiches and the audience love it. Star Rating ★★★★