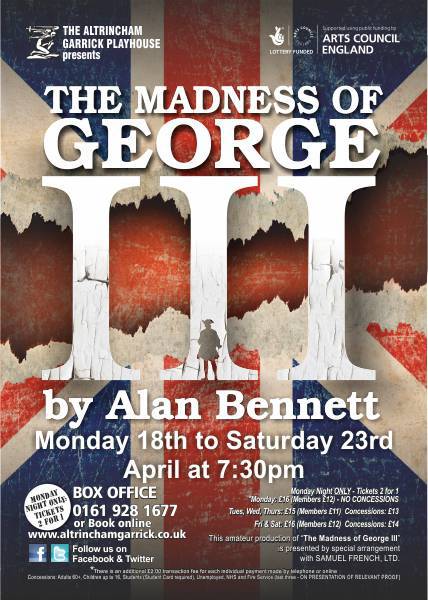 Show Dates
-
By: Alan Bennett
Directed By: Celia Bonner
This amateur production of 'The Madness of George III' is presented by special arrangement with SAMUEL FRENCH, LTD.

Alan Bennett’s award winning play is a terrific mix of terror, comedy and tragedy. This is the true story of a king’s perceived eccentric behaviour and declining mental state and equally declining relationship with his son and heir which threatens the institution of the monarchy itself. Political intrigues and attempts to reverse the state of the king’s insanity desperately try to fend off the Princes’s attempts to seize the throne. The insatiable fascination with the royal family and their domestic problems continues to the present day. The original National Theatre production was so successful both in London and New York, that it was also made into an enduringly popular film. Alan Bennett is one of the worlds best loved playwrights whose many credits include The History Boys, The Lady in the Van ?and Talking Heads.

NickSample’s performance in The Madness of George III represents a high water mark for both Altrincham Garrick but for amateur theatre in general. We share ever second of the monarch’s mental and physical torment as he embarks on a heart breaking battle against an illness that mystifies both the medics, his family and his courtiers. But he’s also a master of the put down and Sample is equally accomplished when it comes to putting across the lighter elements of Alan Bennett’s sublime script. I also like the way this superb play humanises the royals an there are some touching, tender scenes to enjoy between King George and Queen Charlotte, so well played by Sarat Broughton. They come across as, shock horror, real people, warts and all. Don’t be fooled into thinking this is a dry and highbrow piece of theatre. There are plenty of laughs to be had at the expense of the establishment and the king’s outbursts of irreverence. The most difficult scenes involve a medical treatment that verges on sadism, scenes that, even after watching the film version starring the mighty Nigel Hawthorne, make my stomach turn over. Director Celia Bonner has a major triumph on here hands here. Steven Finney impresses yet again and I really liked Peter Brassington as the scheming stuffed shirt, George, Prince of Wales. The ever watchable Martin Oldfield is perfect in the role of Dr Francis Willis.

It would be a travesty if The Madness of George III doesn’t play to packed houses and anyone who refuses to go should be sent to the Tower. Star Rating ★★★★★

The Madness of George III is too good to be missed.  Like old King Coal, George III is a merry old soul affectionately calling his wife, delightfully played by Sarat Broughton, Mrs King.  That is until he contracts Porphyria which slowly drives him mad.  It all happens at Altrincham Garrick Playhouse in Celia Bonner’s unforgettable production of Alan Bennett’s play – one of their best.  In their eighteenth century ignorance, doctors inflict ineffective and tortuous remedies upon the poor King.  Yet he is sane when he loses the American colonies , an event which concerns him so much he won?t talk about it. There is a scheming opposition party plot to make vain George, the eldest of many children, Prince Regent.  Nick Sample’s performance is one that will go down in the Garrick’s history as special. Indeed, he shows true genius.  He makes the monarch his own, illustrating the King’s pleasant side as well as reacting with heart rending shrieks to the terror and pain inflicted on him after slowly going mad. It means being burnt, purged and laced in a straight jacket by his tormenting doctors. In outstanding dramatic moments, he stutters, mutters obscenities, swears, talks incessantly, and falls to the ground, groaning.  The only doctor with common sense is Dr Francis Willis, played in another exceptional performance, by Garrick veteran, Martin Oldfield.
Others worthy of mention are Peter Brassington as son, George, Steven Finney as William Pitt, and Meg Royle as Lady Pembroke who gently rebuffs the King’s lustful advances.
The elaborate eighteenth century costumes, themed in black and white, are a credit to Mike Shaw and his team. Star Rating ★★★★★