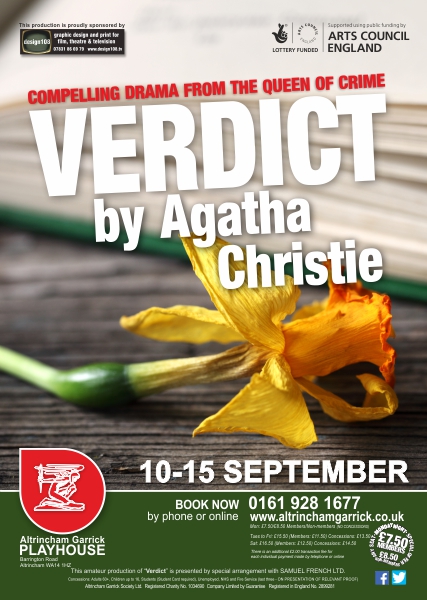 COMPELLING DRAMA FROM THE QUEEN OF CRIME

From the Queen of the Murder Mystery, a story of love, secret infatuations, murder and even a suicide. All the ingredients necessary for an enjoyable evening’s entertainment. A superb Christie piece of theatre, it isn’t the murder that will intrigue you but the psychology of the relationships!

Verdict, Agatha Christie’s final play, written in 1958, differs from most of her work. For starters, the murder takes place in daylight in front of the audience who can see ‘whodunit’. It revolves instead around the psychology behind the murder. This is the best Agatha Christie production I have seen because the people portrayed are real people with real emotions unlike the cardboard cut-out figures the mystery writer usually describes. It all happens in Professor Karl Hendyrk’s book laden flat, a place of  sanctuary for him, his invalid wife, Anya, and Anya’s niece, Lisa, who have escaped from an un-named Eastern European country. The accents of Ros Greenwood’s Anya and Maya Szlachetko’s Lisa are nigh on perfect and not a language coach in sight. Ros’s character is both depressed and depressing as she conveys the troubles of an invalid. The relationship between the characters is crucial to the play’s success. All care for Anya, though most of the burden falls on Lisa. The obvious attraction between Lisa and the Professor remains unspoken. The Professor, played by Richard Sails, is a decent man, who gets entangled in events leading to an unusual and unexpected ending. A great performance, Richard. The Professor has another admirer – his new student, Helen. Megan Relph’s character is sexy and forward in her bid to entangle him. She has always had what she wanted and is thoroughly spoilt by her rich father. As the tension builds, Karl tries to protect the murderer, but this leads to unforeseen consequences. Janet Slade, the housekeeper, serves light  refreshments to the family and light relief  to the audience. The ending doesn’t have the typical twist but, it certainly leaves you thinking. Star Rating ★★★★

When we first meet her, it’s tempting to dismiss Helen Rollander as a spoilt little rich girl who doesn’t have much between her ears. But rest assured, this young woman knows exactly what she wants and exactly how to get it. The same can’t be said of the object of her affections, whose dithering nearly ends in the woman he secretly loves ending up in prison. Why his young students, male and female, are so drawn to Professor Karl Hendryk (Richard Sails) remained a mystery to me. But this ageing academic has the magnetism usually reserved for rock stars in what is for me, the best Agatha Christie play I’ve seen to date. It would be an understatement to describe act one as a bit of a slow burner and while the pace can never be described as electrifying, it improves considerably after the interval break.
This is also the first time I’ve actually cared about characters in a Christie play, but I did find myself sharing the emotional anguish of the Prof’s wheelchair using wife Anya – a outstanding Ros Greenwood – in act one.- and later for the plight of her niece Lisa Koletzky in act two. Maya Szlachetko is making her debut on the Garrick’s main stage and judging by the strength and conviction in her performance she’s sure to be asked to tread these well trodden boards again, many times. Janet Slade, for me one of the Garrick’s finest characters, has much fun with Mrs Roper, the Hendryk’s shrill cockney housekeeper. I have to say I’m not a fan of Christie’s usual offerings, crammed so often with vacuous, cardboard cut out characters. That said, Parissa Zamanpour’s has made me look watchable production has made me look at the queen of suspense in a different light. Parissa has also worked as its designer, creating an effective and absorbing backdrop for a play that’s very close to bus pass age. Highly recommended. Star rating ★★★

Written by Agatha Christie and with a title such as “Verdict”, you might be expecting a traditional “whodunnit” but this play, penned by “the Queen of Crime” in 1958, is definitely not what you might anticipate. It was written purely as a play and is not an adaptation from one of her novels. I was very impressed with the set which is an untidy sitting room, full of books which occupy most of the surfaces. Judging by the clothes worn by Helen Rollander (Megan Relph), I assume the play is set in the era it was written (1958). The play is apparently inspired by the music of Rachmaninoff and this was used to great effect throughout although unfortunately, at one point, it did drown out the dialogue of the Detective Inspector (Steve Connolly). I understand that Richard Sails (Professor Karl Hendryk) has stepped in at the last minute and has had limited rehearsals which makes his performance very creditworthy. He seemed very at ease in the role. I thought everyone’s characterisation was very good, particularly Dr Stoner (Bill Platt) and Lisa Koletsky (Maya Szlachetko). I thought the way they expressed themselves and emoted was authentic and realistic. The emotion expressed by Maya Szlachetko as Lisa Koletzky is very believable, particularly when she becomes angry. Similarly, I enjoyed Megan Relph’s interpretation of Helen Rollander: an unbearable spoiled little rich girl who is very over the top with her “I want and I get” attitude but this is the character so it didn’t come across as overly brash. Mrs Roper (Janet Slade), the housekeeper, provided humour with her rather larger than life (a little like Mrs Overall from Acorn Antiques) characterisation but I wasn’t sure the humour worked in this rather heavy production – particularly as she has a serious pivotal role in Act Two which changes the lives of two of the other characters very dramatically. Some of the dialogue was quite difficult to hear as the cast are not mic’d up. Much more projection is needed from some of the cast as it is particularly difficult to catch what they are saying if they turn away from the audience. Director, Parissa Zamanpour, writes in the programme that this play is about relationships and variations of love and Christie’s exploration as to why people go to extreme lengths. Whilst I am of the opinion that the cast, Director and all those involved in this production have worked extremely hard to do justice to this play, I’m afraid that for me, the script is weak and lacking in substance and is quite dry and boring in parts with nothing for the audience to get their teeth into. There were sections of long-winded conversation which didn’t really get anywhere or take the plot any further and there was far too much exposition which was rather clumsy at times. Some parts were quite unrealistic and the reactions of some of the characters were also not very believable (I can’t give examples without revealing spoilers). However, the script writing is not the fault of the Director or the cast who have done a sterling job with what must be quite a challenging piece to perform and I am sorry I can’t be more enthusiastic about the material they had to work with. My verdict is that whilst the cast did their best, I’m sorry to say that the script and the writing let them down. Star Rating: ★★★

This amateur production of "Verdict" is presented by special arrangement with SAMUEL FRENCH LTD.