Home» Show » Two into One 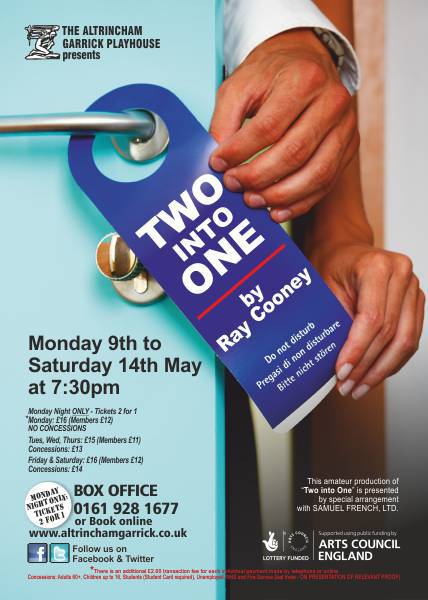 “There’s far too much sex in this hotel and I’m not having any of it!”
Following the Garrick’s hugely successful Run For Your Wife by Ray Cooney, we now bring Cooney’s vintage farce Two Into One to the stage. If you enjoy your farce, you will have a ball at this delicious web of intrigue and joyous sexual mayhem. Considered by some to be his most successful comedy ever, this deliriously manic farce has been described as ” a hilarious orgy of door slamming”. With ingredients like a Tory junior minister, extra marital nookie, suspicious hotel managers and a corridor prowling lady Labour MP you have a recipe for panic, preposterous disguises and side splitting mistaken identity. If you enjoy crazy mad cap comedy this is definitely a popular hit not to be missed!

RAY Cooney’s farce, Two into One, at the Garrick Playhouse, is a credit to director, Alan Clements.It’s about Richard Willey, a junior minister in Margaret Thatcher’s government, who plans an assignation with a secretary in a hotel, complete with revolving stage and realistic lift, expertly designed by Trevor McKie. Unknown to Willey, his wife, Pamela, is smitten by his parliamentary private secretary, George Pigdon. The straight-laced hotel manager, played amusingly by Phil Edwards, frowns on the goings on, declaring with innocent aplomb: ?There’s far too much sex in this hotel and I;m not having any of it. Double entendres like this abound. Doors open and close as embarrassed miscreants hastily try to cover their tracks, Farce may appear easy but it requires much skill.  Utterly at home with the genre is Jonathan Black as Willey. His suave, snake in the grass manner is perfect as he tries to wriggle his way out of preposterous situations. The long suffering George is illustrated well by Mike Shaw who can also dance. Often near-naked, you can practically hear his blood pressure rise as he attempts to lie himself out of tricky moments. Mandy White is delightful as the frustrated wife, and Sarah Roberts is a sultry temptress of a secretary. I like the unexpected appearances of Dan Ellis, as the Chinese waiter. Star Rating ★★★★★