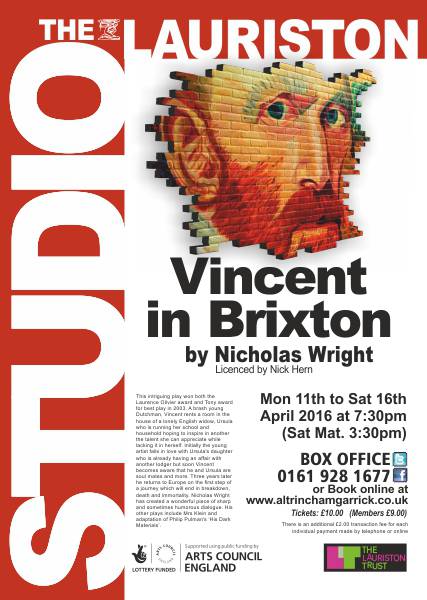 NICHOLAS Wright?s play Vincent in Brixton, ?successfully and with ?imagination, gives those who see the Garrick?s production in their Lauriston Studio, an insight into not only what might have happened, but also the great artist?s mindset.

Vincent Van Gogh, known ?for his sunflower painting, wild brush strokes and bright colours, did lodge in a South London house for a few months when he was young. ?The programme contains a photograph of a genuine Van Gogh drawing ?of 87 Hackford Road, to prove it.

Briefly, he suffers unrequited love for the landlady?s daughter, .but soon switches to a more enduring affection for her mother, Ursula -? even sketching her nude.

Making his Garrick debut, Jamie Sloan portrays Van Gogh? as lacking in social skills? indicating the beginning of the depressive mental illness that led him to slice off his ear.?? He comes across as delightfully na?ve and more interested in religion than art.?? It is not until the end that reference is made to his future paintings.

Kathryn Fennell gives an inspired performance as older woman Ursula and in an unforgettable monologue confesses the inner thoughts which have led to her unhappiness and black moods reflecting those of Vincent.

Jacob Taylor and Laura Crow are well cast as lodger Sam Plowman and Eugenie, the daughter of the house.

But it is Jamie?s Vincent Van Gogh who steals most of the thunder.

This intriguing play won both the Laurence Olivier award and Tony award for best play in 2003. A brash young Dutchman, Vincent rents a room in the house of a lonely English widow, Ursula who is running her school and household hoping to inspire in another the talent she can appreciate while lacking it in herself. Initially the young artist falls in love with Ursula’s daughter who is already having an affair with another lodger but soon Vincent becomes aware that he and Ursula are soul mates and more. Three years later he returns to Europe on the first step of a journey which will end in breakdown, death and immortality. Nicholas Wright has created a wonderful piece of sharp and sometimes humorous dialogue. His other plays include Mrs Klein and adaptation of Philip Pulman’s ‘His Dark Materials’.