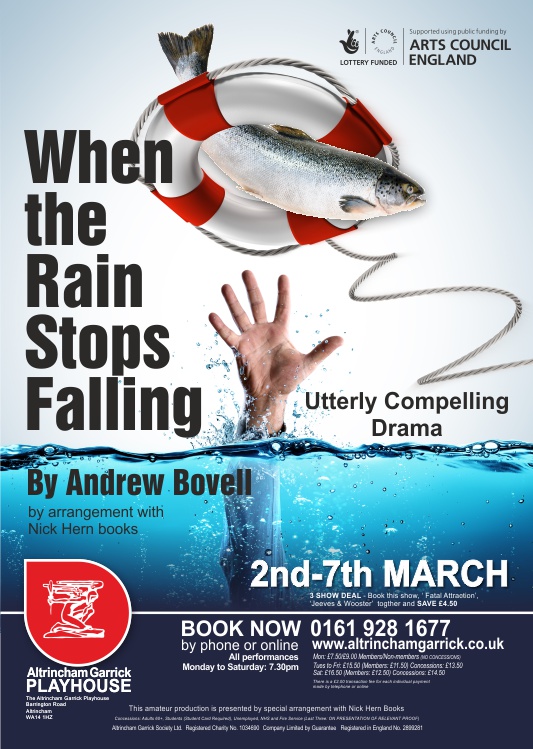 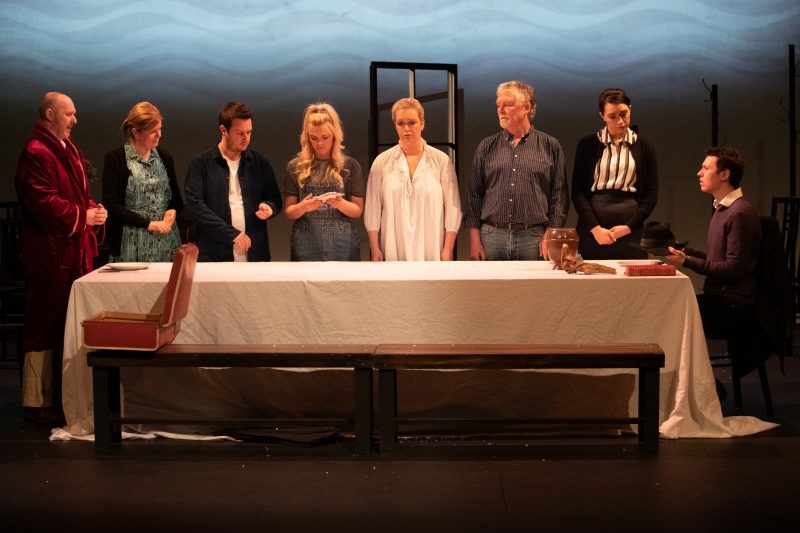 Alice Springs in the year 2039.
A fish falls from the sky and lands at the feet of Gabriel York. It still smells of the sea…
That is how this compelling family saga begins. A play that transports us back and forth in time from one generation to another, from 1959 to 2039, from London to Australia. A series of interconnected stories woven together as four generations of fathers and sons, their mothers, lovers and wives confront their mysteries of the past in order to understand their future; revealing how patterns of betrayal, love and abandonment are passed on, until finally, well into the future, as the desert is inundated with rain, one young man finds the courage to defy the legacy.
From the same pen as last season’s beautifully poignant and critically acclaimed ‘Things I Know To Be True’, Andrew Bovell’s play is epic in its scope yet at the same time extraordinarily intimate.

“They fuck you up, your mum and dad. They may not mean to, but they do. They fill you with the faults they had. And add some extra, just for you.” The lines of Philip Larkin’s immortal ‘This be the Verse’ were running on a loop in my head as I left Altrincham Garrick, following the opening night of ‘When the Rain Stops Falling’ by Australian dramatist Andrew Bovell. I knew nothing of the play, and I had only taken on the review at the last minute, convinced to attend by the opportunity to see local Director Joseph Meighan in a rare acting role. Two hours later, I’d seen my best production so far of 2020 and the theatre had once again astounded me with its ability to surprise and provoke. Set over an eighty year time span between 1959 to 2039, Bovell has chronicled the lives of four generations of one family from London to Australia, as they struggle to cope with the mistakes they make as people and parents and come to terms with their past and its effect on their life choices. He chooses Alice Springs in 2039 as his jumping off point, Gabriel York (Mark Butt, who also directs) waits for a visit from his estranged son Andrew (James London) and with his blistering opening monologue sets the tone and language for what is to follow. A circular, non-linear narrative is employed to explore the relationships between his grand parents Henry Law (John Joyce-O’Keefe) and Elizabeth (Parissa Zamanpour & Ros Greenwood); their son Gabriel Law (Joseph Meighan) and his blossoming romance with Gabrielle York ( Alex Edge & Beverley Stuart-Cole) and her subsequent meeting and life with Joe Ryan (Richard Sails). If this sounds confusing, it is purposefully so, with three variations of the same name (Gabriel) employed for separate characters and a continuously shifting time line, this is play that rewards total concentration. As we bounce between Eighties London and modern Australia, past secrets about the characters slowly begin to emerge and it is only at the very end that the completed narrative is brought to a darkly satisfying conclusion and full understanding is reached by the audience. The theme of repetition of past mistakes is starkly underlined in the language used by Bovell in the play. Scenarios and dialogue are constantly repeated down the years to emphasise the inherited similarities through the family, creating a claustrophobic atmosphere that suited the secretive family dynamic. Fathers do not fare well here, always leaving by accident or design, with only stepfather Ryan coming out with any credit for his paternal instincts. This is a great play for actors with nearly every role having strong monologues and emotional depth to mine. The company did not let down the material, with uniformly excellent performances from a very experienced cast. Meighan and Edge developed the love story with beautiful sincerity, made more poignant by already knowing the fate of Gabriel; Stuart-Cole portrayed Alzheimer’s with convincing confusion and rage and Joyce-O’Keefe gave pathos and depth to a character who ostensibly lacked sympathy. As Director, Mark Butt chose to place an interval in the middle of the two hour run, where non existed in the original staging. Judging by audience reaction, this was a smart move as everyone around me expounded their own interpretations and explanations of the convoluted plot over a swift G&T. In a similar vein, the family tree projected onto the back cloth aided understanding of the relationships between the characters greatly.Certain elements of the piece felt overwritten, most notably the referencing of 18th century philosophy and a concentration on past cataclysmic weather events which were part of a wider motif around climate change. Whilst there was a tenuous link between this theme and the central plot, in this production it felt superfluous to the family drama which was what excited and intrigued.

Overall, a complex emotional and nuanced piece of writing by Bovell, beautifully executed by an experienced cast. Get to the Garrick before Saturday, this is one of the highlights of an excellent season and deserves to be seen. Star Rating: ★★★★

‘The theatre is the only place where the past, the present and the future can be revealed at the same moment’ (Mark Butt, Director of When The Rain Stops Falling.)

This couldn’t be truer of a production, than this. Spanning four generations from London 1959 to Australia 2039, this story interweaves a series of episodes and vignettes of families, whose connection is revealed through a gripping, enigmatic story line in which harrowing family secrets emerge from the past. From the same pen as last season’s ‘Things I Know To Be True’, this poignant production brings you into a world where hidden truths break apart relationships.

Director Mark Butt has nailed this production. Everything from his stark stage design, to the contemporary soundtrack and the brilliant direction of his cast was just wonderful and transported you to a professional theatre with the Garrick’s ‘high-end amateur’ quality. If I had to pick fault, it may be that the first half is slightly too long, but that’s in the writing not the direction. With a projected backdrop of a family tree (with lots of Gabrielle and Gabriel) before the play began and during the interval, the audience automatically attempted unpicking the who’s who of this story and it became harder the more they jumped back and forward in time but by the second half, the lightbulb moment finally happened and it was fascinating to watch unfold. The cast of eight had a hefty script to negotiate, which was full of monologues and duologues but never ceased to captivate the audience. From Gabriel York’s opening monologue (Mark Butt) with the dramatic rain falling in the backdrop to the letters of Henry Law (John Joyce-O’Keefe), atop Uluru (Ayer’s Rock), this was just a beautiful insight into the characters’ psyche. The female protagonists who played mirrored roles of older/younger versions of the characters were also beautifully portrayed with pathos. The innocence of young Gabrielle York (Alex Edge), juxtaposed with her older self (Beverly Stuart-Cole) was tragically brilliant and the contrast in the two Elizabeth Law roles was stunningly perceptive and authentic in her discovery of the truth. But it was in the relationship between Gabrielle York (Edge) and Gabriel Law (Joseph Meighan), where I felt the story really gripped me and brought everything together. These two performers had a wonderful rapport with one another and even tackled Australian and British accents with ease and believability, something which can become jarring in an amateur production but felt so natural and real in this case.
The cast of this production didn’t put a foot wrong, which is not only testament to their director but the repertoire of experience the performers brought to this Garrick production. These are mostly trained actors from drama schools from Mountview to the Arden Centre, as well as other cast members with many years of experience performing at the Garrick Theatre and across the country and you feel this quality when you watch this production as you sense a stage presence from all cast members which only normally exists in professional productions. It’s hard to choose a favourite character or performance but a particular standout moment for me was in the choreography of the opening scenes. Choreography by Clara Darcy, gave this production a slick and contemporary feel and the simple stage movement produced an authenticity reminiscent of modern Dance-Theatre, without any of the pretension. In particular, the eating of the fish soup in unison and the stage exits, created a uniformity that reminded me of companies such as DV8 and Frantic Assembly.

This was one of the strongest productions I have seen in a while at the Garrick: brilliant casting of a wonderful script with superb production quality. It had me gripped from start to finish. This is one not to be missed

The phrase “family strife” takes on a whole new meaning while watching Andrew Bovell’s intense and absorbing play and it’s title couldn’t be more apt, with a large swathe of our country still under water thanks to man made climate change. Bovell paints a futuristic vision of Australia 2039, which is when and where the play begins, and it’s a vision straight out of our worst nightmares. It’s a future in which fish – yes, fish – are on the verge of going the way of the dinosaur. Gabriel York – played by Mark Butt – is about to have lunch with his estranged son. Down on his luck, Gabriel doesn’t know what to give him until an event takes place that has all the hallmarks of divine intervention. Mark, who directs this ambitious and largely laughter free piece, plays the part with just the right amount of authenticity and directs it with a boldness and a confidence that can only be admired. This is pretty meaty stuff and the action takes us on a touching and sometimes tearful time travelling journey. While some of the script is so brilliant it’s sure to make budding writers turn green with envy, there are occasions when Bovell tries a little too hard to be deep and profound. When The Rain Stops Falling is also drama for grown ups, with the story tackling the difficult subject of child abuse briefly but vividly and without a hint of sensationalism. The music provides a haunting and atmospheric backdrop to what unfolds on stage.

I am not singling out other performances as this production is a major triumph for the Garrick’s gifted ensemble even if I left the theatre feeling like I’d been hit by a 10 ton truck. Star rating – 3.5 out of 5 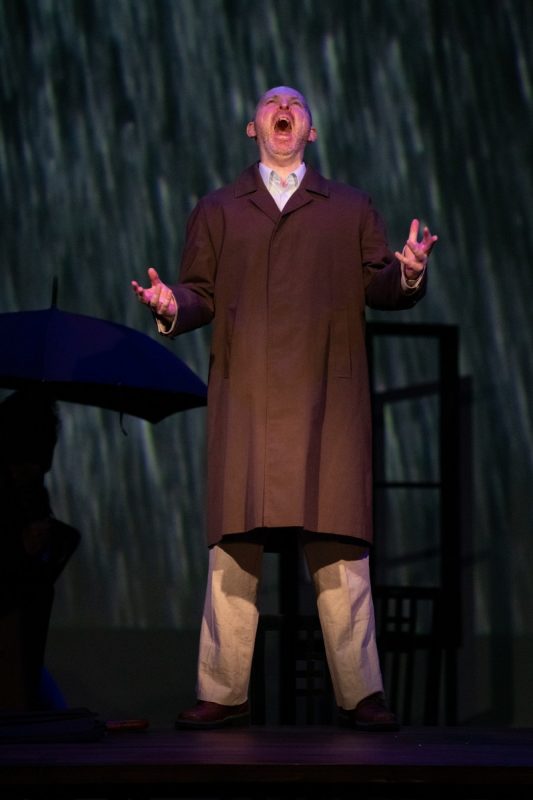