Home» Show » When We Are Married 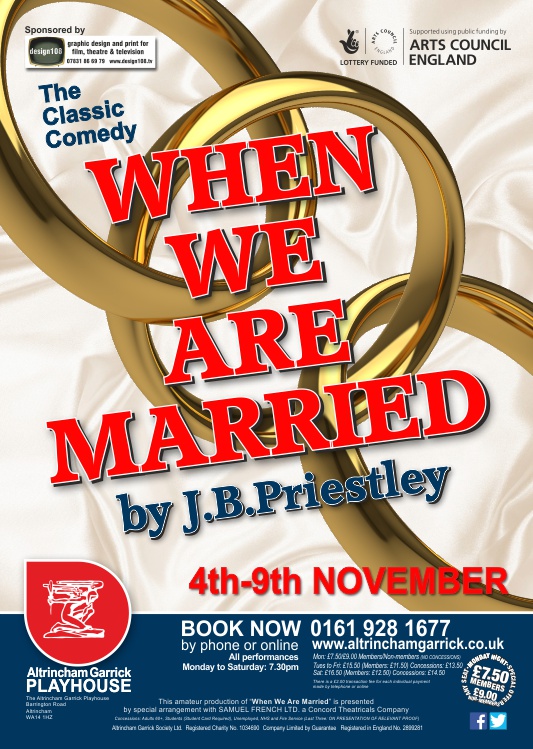 Show Dates
-
By: J. B. Priestley
Directed By: Carole Carr

Set in Cleckleywyke, a fictional town in the heart of Northern England in 1908. Three couples, the Helliwells, the Parkers and the Soppitts, who are all highly respected pillars of their community, gather together to celebrate their 25th wedding anniversaries when the festivities are brought to a sudden halt by a shocking revelation. Home truths fly like confetti and conjugal rites turn into farcical fights. Can a lid be kept on the couples embarrassing secret with a newspaper photographer due to arrive any second, a missing housekeeper and a doorbell that doesn’t stop ringing? The bullies however do get their retribution and the hen-pecked are satisfyingly liberated in this classic sparkling comedy that is full of laughs, surprises and comic mayhem! 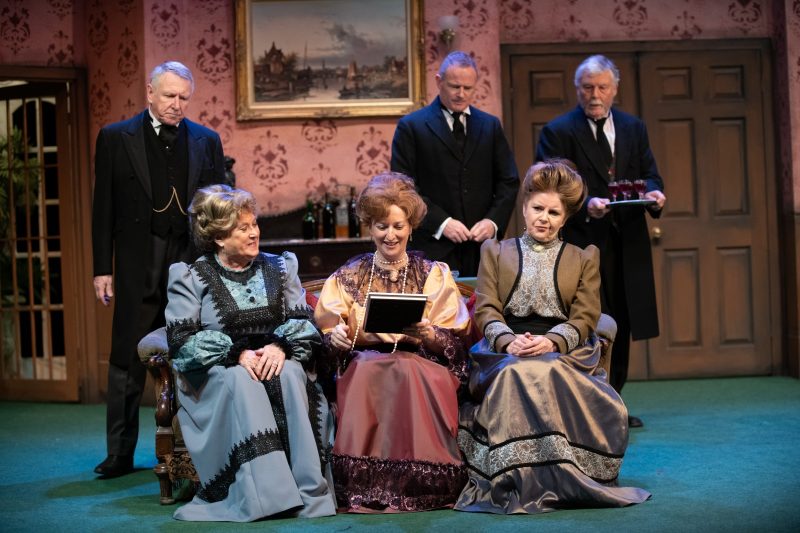 The Altrincham Garrick theatre continues its stellar 2019 season with J.B Priestley’s ‘When We Are Married’ all this week featuring a talented cast and a script which is still relevant today. Set in Cleckleywyke, a fictional town in the heart of Northern England in 1908. Three highly respected couples get together to celebrate their 25th wedding anniversaries, but the festivities are brought to a sudden halt by a shocking revelation which sees home truths fly like confetti and conjugal rites turn into farcical fights. Directed by Carole Carr; this production still manages to be relevant with a script which has aged surprisingly well, packed with gentle humour throughout. The staging is reminiscent of a lavish parlour room of the 1900s and looks every bit the part with furniture and plush fit of the era, it’s nice to see such attention to detail going into the props, costumes and staging of these productions. The ‘anything but amateur’ cast bring the JB Priestley script to life on the Altrincham stage with all delivering noteworthy performances with no exceptions. The three couples of which the plot centres around are played by six extremely talented actors; Mr & Mrs Helliwell played by Richard Sails and Alice Porter, Councillor Parker and his wife played by Mike Shaw and Christine Perry and Mr & Mrs Soppitt played by Hugh Everett and Ros Greenwood – all take the roles in their stride and look to be having a lot of fun on stage, displaying some great examples of visual comedy from them all; especially Ros Greenwood and Mike Shaw who impressed me throughout. What a gurn Mrs Soppitt has! The entire cast of fourteen all make this production extra special; Ms Northrop played by Alison Davis and Ruby played by Georgia Geupel add extra humour and warmth to this play, with tremendous comic timing! The photographer and reporter played by Geoff Holman and Eddie Beasley both have loveable personalities that the audience lean towards. Especially when one gets tipsy! Anthony Morris plays the smug Organist Gerald Forbes alongside Olivia Tenquist as Nancy Holmes, his romantic interest. Lindsey Barker plays Lottie Grady and David Richardson plays Reverend Clement Mercer to complete the cast.

I must be honest; I am in complete awe of this ensemble and how this production cleverly delivered this well-known play with energy and vibrancy. I have seen different versions of ‘When We Are Married’ in various theatres over the years but this truly is the best I’ve seen. Altrincham Garrick is not amateur theatre; it always delivers quality entertainment with a ticket price which is the fraction of the price of big touring productions.

Verdict: the best production of this play I have seen, Terrific throughout! Rating: ★★★★★

CAROLE Carr’s perfectly paced production, performed by a gifted cast who gel beautifully together, is period comedy at its very best. While the subject matter of Priestley’s classic wouldn’t raise an eyebrow today – three self-proclaimed pillars of their community may not be officially married after all – you have to view the piece through nostalgic eyes in order to appreciate it. The piece takes us back to a north of England that’s long been consigned to the history books, to a time when if you came from another part of the country you may as well have come from another planet. Some of the dialogue sounds silly to 21st century ears but the majority of it is sublime. It seems unfair to single out individual performances for the simple reason there aren’t any weak ones in a production that is amateur only in name. Geoff Holman is great fun as the local newspaper photographer Henry Ormonroyd and I equally enjoyed Hugh Everett as the downtrodden Herbert Soppitt. Then there was Alison Davis, an actress who is always a pleasure to watch as the formidable housekeeper Mrs Northrop and a performer who is new to me, Georgia Geupel, as Ruby Birtle, the housemaid struggling to make sense of the chaos that unfolds in the Heliwell household. Lindsey Barker also caught my attention as the oh so worldly Lottie Grady, so convincing as a woman who has been around the block on many, many occasions.

Personally I can’t think of a better antidote to these dark, dank November nights. Highly recommended. A must see for anyone with a sense of humour.


This amateur production of "When We Are Married" is presented by special arrangement with SAMUEL FRENCH LTD. a Concord Theatricals Company