Home» Show » Whipping It Up 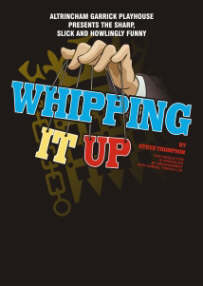 Black ties; cigar smoke; whisky in cut glass. Westminster runs the country, but the Whips run Westminster. It’s a week before Christmas, and the new Tory government is facing dissent over its latest Bill. With a majority of only three, the Whips’ office is out in full force, and they’ll stop at nothing to keep the strays in line. But they’re in for a long night: boy scouts are rioting in Whitehall, the PM’s golfing with the President, five Tory rebels are on the loose and the Chief Whip’s playing at Santa – could this be the beginnings of a leadership challenge.
The scandalously funny Whipping It Up blows the lid off the Despatch box and reveals the true secrets locked in the Whips’ safe. In the year of a General Election and without a word about EXPENSES this play is not to be missed.

Some of the audience voted with their feet when the interval arrived for ‘Whipping It Up’, the patchy political play currently playing at Altrincham Garrick. It was a shame, because while the script has several weaknesses – such as the over use of expletives by writer Steve Thompson – the acting in Celia Bonner’s production is first rate. Particularly good is Geoff Holman as The Chief Whip, a parliamentary bruiser who doesn’t suffer rebel MPs gladly. A rottweiler in a sharp suit you might say, Alastair – an excellent David Beddy – is his second in command and he prefers a more softly softly approach when it comes to dealing with those who aren’t toeing the party line. It’s the political equivalent of the classic good cop/bad cop routine and great fun to watch. Hugh Draycott is also eminently watchable as Tim, the young whippersnapper who, like his two colleagues, has had his conscience surgically removed. For me, those three actors hold the production together, making the best of a script that tries a little bit too hard to be controversial at times. There were occasions when I felt I was drowning in bile. Neither of the main political parties emerge in a particularly favourable light. This play could have been so much funnier and for its writer this is a classic case of opportunity missed.Star Rating ★★