Home» Show » Witness for the Prosecution 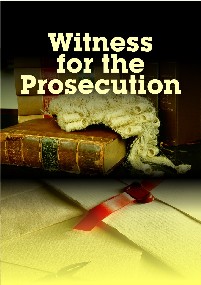 A gripping courtroom drama with all the suspense and twists that we have come to expect from the pen of Agatha Christie, this is one of the best thrillers of her later years.

Eminent barrister, Sir Wilfred Robarts defends the young Leonard Vole on a charge of murder, convinced of his innocence. But who did kill the old lady Vole had befriended? Was Vole the last person to see her alive? Who is the mysterious young woman who visits Robarts with new evidence? And how much does Vole?s wife, Romaine, really know about what happened?

Have you listened to the evidence?

I can remember, when I was a trainee journalist, spending an afternoon in Sheffield Crown Court as part of our course. A guy's liberty may have hung in the balance but it was an engrossing and a fascinating experience. Two silver tongued lawyers had us in what best can be described as an emotional tug of war, and I left the courtroom thankful I was only a spectator, rather than a juror, somebody who would have a hand in the ultimate fate of the accused.

Witness for the Prosecution, Altrincham Garrick's latest production, is similarly engrossing. A personable young man stands accused of the murder of a well heeled older lady who he has recently befriended. The case comes to court and his icy German partner - we later discover she isn't his wife - tears his alibi apart in the witness box. Leonard Vole, it seems, is heading for the gallows. But being Agatha Christie there are a couple of nice twists at the end of the night. I thought I'd worked out who'd done the horrible deed, but it turned out I was way off beam.

This isn't an action packed evening at the theatre but director Celia Bonner has created a production that holds the attention.?Witness for the Prosecution?would make a great radio play as there isn't a great deal to watch. But what I really liked about this story is that the characters don't have that irritating cardboard cut out quality that you find in other Agatha Christie stories. These are characters of substance, even though their creator doesn't take us too deeply into their respective psyches. I feel she could have done more with Romaine, Leonard's seemingly double crossing partner.

Allan Taylor is a terrific actor and he commands the stage as Sir Wilfrid Robarts, Vole's barrister. Peter Roberts is also eminently believable as Leonard Vole, but the performance I really like comes from Ros Greenwood as Romaine. Still waters run deep as they say and Ros has quite a stage presence. An excellent production -just be prepared to listen.

Witness for the Prosecution
****

Sometimes a reviewer longs to reveal the twist in the tale of a play. It is especially tempting to do so withWitness for the Prosecution?by the Grande Dame of crime writing, Agatha Christie, at Altrincham Garrick. The ending is totally unexpected ? but I?m keeping mum.

The action (or lack of it ? courtrooms are static places) takes place at the trial of Leonard Vole, accused of murdering a rich elderly lady who has left him all her money. But did he do it, and, if so, why? As with all Agatha Christie works, the audience must have their wits about them to work out what happened on the night of the murder. There are plenty of clues and more than one suspect.

Garrick veteran, Allan Taylor who takes on the wordy lead role of Sir Wilfred Robarts asks probing questions in an appropriately deep, sonorous voice. He is paternalistic towards the accused. We have no reason to doubt his judgement until the end. Whoops, I nearly gave the game away! But Allan couldn?t have performed so well without the cross-examination and perfect timing of Steve Williamson as the Prosecution barrister.

A leading witness is Romaine, the defendant?s German wife. She?s a tricky character and you are not sure whether you can trust her. Ros Greenwood gives her a strong presence yet skilfully and coolly indicates her doubtful veracity. What are her motives? She certainly gives Sir Wilfred a run for his money. Other witnesses could be lying, too. Surely not Janet MacKenzie, a straight talking, crotchety Scot who was the dead woman?s housekeeper, played with unfaltering accent by Pat Williamson who not only talks like a dull old fuddy duddy but walks like one, too.

And what of the defendant, Leonard Vole? Peter Roberts? performance engenders sympathy yet you still have those nagging doubts. Surely this outgoing pleasant young man couldn?t have done it?

The Garrick has, once again, come up with a cracking set and the courtroom has been repositioned to put the audience in the position of the jury. When the judge (David Gonet) asked if the defendant was guilty or not guilty I felt tempted to shout my verdict (which I am not revealing) out loud, pantomime style. Even though it was written fifty years ago,?Witness for the Prosecution?hasn?t dated much and can still grip audiences especially under Celia Bonner?s expert direction.

All rise at the Garrick
By Rick Bowen

Theatre goers who attend Altrincham Garrick's next production will find themselves in court - without committing a crime. The society will launch its new season with Witness for the Prosecution, a play from the pen of the woman they call the queen of suspense.

Director Celia Bonner says Agatha Christie has had a profound influence on modern writers like Ruth Rendell, and if she could have asked her one question, Celia would love to know why she went into this particular literary genre in the first place.

What is the play about? "It's about a man who is accused of murder and then how his wife behaves in the witness box. He's accused of murdering an old lady who he's been visiting," she says. She would, in many ways, describe the piece as quintessential Christie, with a few red herrings and "a nice twist at the end."