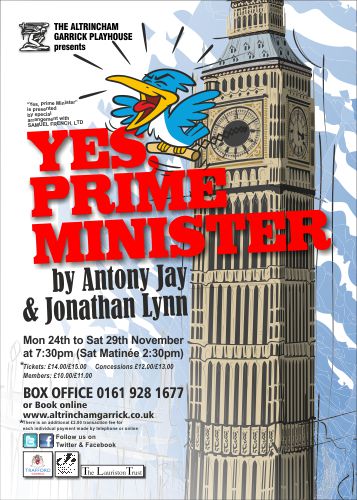 This is one of the most successful plays in recent years. The original writers, Antony Jay and Jonathan Lynn have reunited for this new play based on the classic and much loved TV series with a new satirical take on Whitehall. Prime Minister Jim Hacker and his Cabinet Secretary Sir Humphrey Appleby are back, spinning out of control through the collapsing euro and austerity measures in a world of 24 hour news, Blackberrys and ‘sexed up’ dossiers. With the country on the brink of financial meltdown the PM is staring disaster in the face with his only apparent salvation in a morally dubious deal with the Foreign Minister of Kumranistan. Will Jim Hacker and his team of advisors be able to rescue the country from the edge?
Laughs galore in this comedy treat.

If you see Andrew Higson in the bar after Yes, Prime Minister buy him a drink. He certainly deserves one. As Sir Humphrey Appleby he jumps through hoops verbally as the character hides behind a smokescreen of some very big words that give the distinct impression the top civil servant has swallowed a dictionary. Sir Humphrey may have a skewed sense of morality but it’s impossible not to warm to him, as he delights in keeping the PM in the dark. The TV version was a classic, which meant Altrincham Garrick had a battle on its hands when it decided to put on the stage version. But, this is a theatre company that has never shied away from challenges and thanks to some expert and astute direction from Alan Rothwell, and a strong cast, they strike comedy gold here. Garrick new boy Malcolm Cooper is perfect as the beleaguered Prime Minister Jim Hacker, a man who gives a whole new meaning to the phrase “a lot on his plate.” Malcolm manages to capture that ‘rabbit caught in headlights’ vulnerability that made the late Paul Eddington so watchable in the role on the small screen. Then there’s the script of course, some of the lines in Antony Jay and Jonathan Lynn’s script are so breathtakingly brilliant it makes you give thanks you own a pair of ears. I also really liked Daniel Ferguson as the lovable Bernard, with his penchant for Latin quotations and endearing sense of bewilderment. How does Jim and his aides solve a problem like a randy visiting dignitary with a raging libido?Pleasing him could mean the difference between and important deal collapsing and being struck.

The original writers of the 1980’s TV series, have come up with a stage version of Yes Prime Minister. The Garrick receive well deserved laughs for their portrayal of the goings on in a coalition government. The cast are, as usual, top brass but it is the writers, Antony Jay and Jonathan Lynn I call into question. Surely they could have come up with a better reason than paedophilia as a way of persuading a foreign minister from an oil-rich state to build a European pipeline. Then, as we know from the TV show, Jim Hacker, the incompetent PM, will stoop at nothing to save his own bacon. All the same, it seems distasteful and unfunny for him to request the company of an underage girl for sex with the rich Eastern European who dangles the deal before him. That said, you have to laugh at the futile attempts made by Hacker, his scheming Cabinet Secretary, Sir Humphrey Appleby and the PM’s Personal Private Secretary, Bernard Woolley, to manage the country’s affairs. Malcolm Cooper is spot on as the Prime Minister with a constant air of bewilderment whilst an outstanding Andrew Higson portrays well the wheeling, dealing Sir Humphrey who has seen it all before. Malcolm deserves praise for two marathon soliloquies spoken in civil service gobbledygook one of which, at least,, receives a huge round of applause. Daniel Ferguson’s Bernard, an upright chap, has problems with his conscience, a rare phenomenon in the turbulent world of Jim Hacker’s government.?Then comes the femme fatale in the form of Beverley Stuart-Cole as a titillating special advisor who adds sparkle as well as complications to the plot.There is a hilarious scene near the end when the PM, appears live on TV using a new scam to save his skin.

This modern political farce has been widely acclaimed since its conception in 2010, adapted from the 1980’s TV comedy of the same name starring David Haig as the futile PM. I’m not convinced this sitcom translates overly well as a piece of theatre, I never watched any of the episodes on TV though whilst watching the live production I could sense something about the piece that it hadn’t originally been intended for live theatre, seeming to lack a theatrical inkling. It’s evident that fans of the televised original are supporting the live adaptation and are enjoying and appreciating it, perhaps I should’ve endured the box set before casting this opinion. The set was a traditional three wall box which did the job with the lighting design only requiring a simple set up. Graham Simmonds recovered well from an ungainly dry spell in his first scene, I was sure the performance would take a minor reprieve but we were eventually back in full swing, Graham and the cast recovered well from the unnerving phase and continued with the proceedings without a glitch. Andrew Higson splendidly catches an astute, public-school superiority in Sir Humphrey who regards the PM as a distressingly common and slow-witted oaf, his monologues swerving a direct answer to a straightforward question are hilariously accurate and were well received.
There are fine turns, too, from Daniel Ferguson as the harassed principal private secretary, Bernard, and Beverley Stuart-Cole presenting the PMs Special Policy Advisor both immersed in the complexities of morality versus the common good. The star performance, for me, is that of Malcolm Cooper as the PM with his glassy eyes and rigid grin as the situation slips out of his control are a joy to behold, and the hilarious sequence when he crawls under his desk like a terrified dog as disaster stares him in the face. Safely directed by Alan Rothwell who presented, I’m sure, exactly what the script asks. I cannot comment on how he’d translated any inspiration from the original series though I expect it to be an accurate imitation. Alan had an undeniably strong cast who certainly did what they could to add vitality to this hauled and overextended script.