We are pleased to announce a Special Price for a Special Production….
We have introduced a Children’s Price for our production of The Secret Garden
LIVE entertainment for ALL the family… 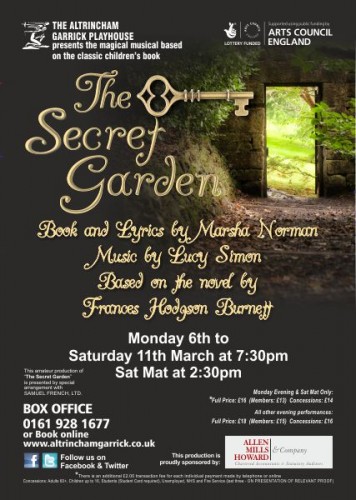 Frances Hodgson Burnett?s beloved victorian classic, The Secret Garden, blossoms anew in this enchanting musical by Pulitzer Prize-winner Marsha Norman and Lucy Simon. When young Mary Lennox loses her parents to a cholera outbreak in India, she is sent to live with her uncle, hermit Archibald Craven, who lives in an imposing, secluded manor on the British heath. Inside the haunting house upon the hill, Mary finds a reclusive, long-suffering collection of souls. Since her aunt Lily?s death, Mary?s uncle has pushed away his surviving loved ones, leaving his bedridden son, Colin, alone. Sickly Colin, hidden away in the depths of the manner, bears the guilt of his mother?s death on his crippled shoulders. When Mary discovers her Aunt Lily?s hidden garden, locked shut and overgrown with vines, stubborn Mary is determined to revive the beauty that once was. Surrounded by spirits from the past, who both warn and welcome her, determined Mary begins to peel away the layers of sadness that cover the house and the garden, showing us the power that ?one small girl? can have when she ?wants things to grow.?

Don’t forget, Alan Bennett’s The History Boys opens tonight!?- once again this looks like being another memorable production on our Main stage, so, as the nights start closing in, come down to the Garrick for a warm welcome and some REAL LIVE ENTERTAINMENT! with the REAL X FACTOR! – Book online NOW or directly from our Box Office -?call 0161 928 1677 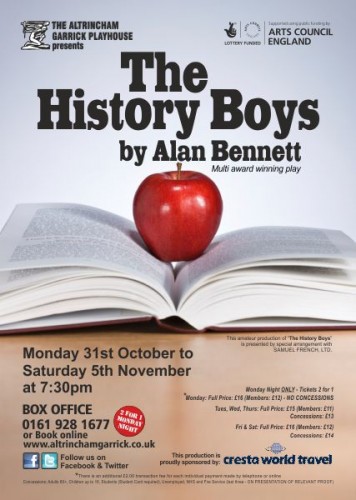 The History Boys sees its second outing at the Garrick after finding great success with our audiences. The play opens in Cutlers? Grammar School, Sheffield, a fictional boys? grammar school in the North of England. Set in the early 1980s, the play follows a group of history pupils preparing for the Oxford and Cambridge entrance examinations under the guidance of three teachers (Hector, Irwin, and Lintott) with contrasting styles.

Hector, an eccentric teacher, delights in knowledge for its own sake, but the headmaster ambitiously wants the school to move up the academic league table; Irwin, a supply teacher, is hired to introduce a rather more cynical and ruthless style of teaching. Hector is discovered sexually fondling a boy and later Irwin?s latent homosexual inclinations emerge.

This production is sponsored by Cresta World Travel

Finally, we are pleased to announce our latest auditions, this time in our Studio space, for

Death and the Maiden

these will be held on TUESDAY December 6th at 7:30pm

with ?DEATH AND THE MAIDEN? in the subject of your e-mail,?thank you.

All parts currently open to Garrick members and non members.

If successful you will have to join the society, pay your subs and become a member.